Last week on Friday the Fashion Night gala show featured a star performer from the Eighties, the number one female artist Kim Wilde admitted planning a comeback later this year. 20 years after the release of 'Kids in America' there is a compilation album, and this plus the single 'Loved'. Kim says her voice is now stronger than ever before.

Kim got up on stage in November for the first time in a long time. 'I realized how wonderful it is to perform and how I was full of energy', Kim said. She joked of her husband Hal Fowler who  rejoices now that his wife is finally bringing in some income in the household. And Kim himself has nothing against the touring - on the contrary.
'When a three-year old kid sneaks in the morning at half past four and literally sits on your head and begins to whisper that it's time for mother to wake up, it is pretty terrible. So guess just how wonderful it is to get to sleep at night and getting meals served', says Kim with a laugh.

The 41-year-old Kim says that after living 15 years from a suitcase, it is a happy position to be finally home, with family and a secure future. She no longer searches for life's meaning and direction, as it has been found. It's a good platform from which to do things that seem important and bring stimulus to everyday life, such as occasional gigs, garden design, or even younger sister, Roxanne's budding solo career. (Roxanne ex-band was Kylie Minogue's warm-up band during last year's British tour).

Of the four earlier visits to Finland Kim remembers the best 13 December 1983 gig at the Oulu Ice Hall, because it is her all time northernmost and coldest gig.

At Christmas time, the trees were thick with snow and it was terribly cold. On stage there were big heaters, but the mist still came in from the entrance, Kim recalls. 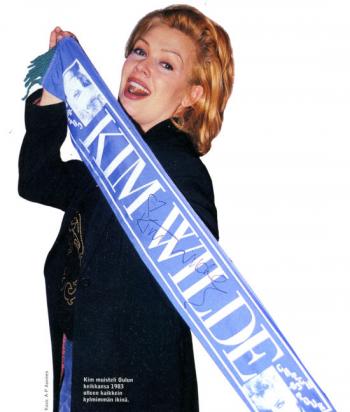