Though she had a staggering 14 top 20 chart entries during a 15-year pop career, it is Kim Wilde's first single, 1981's Kids In America, for which she is perhaps best remembered. Having left the music world five years ago, Wilde says today, 'I couldn't imagine still singing that song when I was 50. There comes a time when it's best to bow out.'
Much of the impetus behind the decision was meeting her husband-to-be while on the set of the West End show, Tommy. 'I'd met this man, we wanted to have babies, and I just thought, "I'm going to give this my best shot",' she says. She now has two children, Harry, three, and Rose, one.

Shortly after getting married, Wilde started studying gardening at Capel Manor, Enfield, obtaining a general certificate in horticulture. She is now taking a two-year City & Guilds course in planting design.
Against her expectations, this career change has helped put Wilde back in front of the camera: she is set to appear in Garden Invaders, BBC1's forthcoming morning gardening programme. 'I'm offered interesting jobs and projects because of my name, I think, but that makes me work twice as hard,' she says. 'I know that I have much to learn, and that I must live up to the high standards of other gardeners around me.' 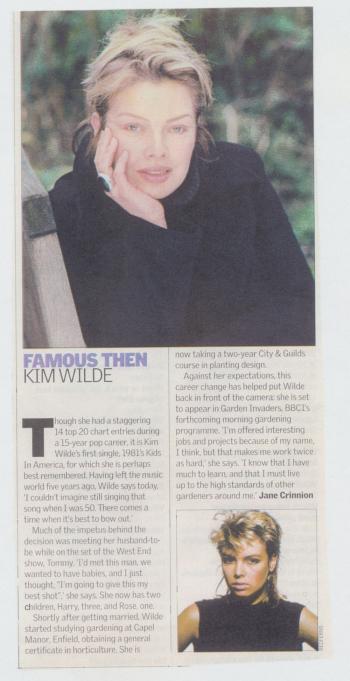