It's dubbed "The Greatest Eighties Tour Ever".

But cynics might just glance at the line-up of Here And Now and mutter something about not having seen so many dinosaurs since the last Jurassic Park film. Kim Wilde, Paul Young, Curiosity Killed The Cat, Nick Heyward, T'Pau, Go West and Heaven 17 won't join forces until November, but you can already hear the groans of disapproval.

Carol Decker - the flame-haired owner of the paint-stripping voice behind T'Pau - is not alone in dismissing the brayings of critics. "People who never liked us in the first place will look at the line-up and think, 'Why don't these people just sod off and die?' But people who loved us will love to see us again."

Tickets are selling faster than cowboy hats at a Madonna gig, proving there is an audience for Eighties nostalgia. Appetites have already been whetted by the Culture Club/Human League/ABC arena tour. Scoff all you like; the show's promoter, Tony Denton, 40 - who was behind the Culture Club tour - is laughing all the way to the bank. Denton won't talk exact figures and neither will the artists, but Ben Volpeliere-Pierrot, Curiosity Killed The Cat's beret-wearing singer, says the fee will help pay off his debts. And Heaven 17's Glenn Gregory says it'll come in handy for Christmas.

Paul Young, who still tours and makes albums, isn't hard up. So why bother recreating the past? "Just because it isn't Wembley Stadium doesn't mean it isn't valid, " Young replies. "This is just another way to perform. Plus it's only eight shows, so I only have to blink and it'll be over."

Kim Wilde, now aged 40 and a successful gardener, isn't bothered about the money. "I get offered money to do all sorts of things and I always turn it down, " says the former most-lusted-after woman in Britain. "But if I can earn good money and have a great time too, then why not? I'm just going along to have some fun. I'll be as saucy as I can so I don't smash everyone's illusions - not that I really care about that. I'm carrying a few extra pounds, but I'll try to shed them and squeeze into the old leather trousers." The same leathers from her Kids In America heyday? "No, " she confirms. "But you can still look as good in a size 14."

Kim is the only one harking back to her Eighties image. The others are making sure their streaked mullets and bat-wing silk shirts remain in the past.

That's no bad thing when you've aged as gracefully as Carol Decker - in fine shape at 43 - and Curiosity's Ben, still a handsome devil at 36. But Nick Heyward, once Haircut 100's fresh-faced boy, has gained weight and straggly long hair since turning 40.

"We're all from the same generation, so I don't think people in the audience will be shocked, " he comments, unflustered. "It's like meeting up with an old partner and thinking, 'God, they've changed.'" Those taking part expect the audience to be in their 30s or 40s, although Kim Wilde was surprised by the youthfulness of her fans at a recent fund-raising gig. "I'm always amazed when 20-year-olds come up to me in the street and say, 'I love Kids In America', " she says. "It made me realise there's enough interest to justify me going out and doing this tour."

The arena may be a den of nostalgia, but backstage promises to be far less raucous. Most of the artists have families so it's unlikely to be a scene of sex, drugs and rock 'n' roll in the dressing-rooms.

No one seems concerned, however, that their glory days were there and then, not Here And Now.

Go West's Peter Cox is pragmatic. "It's more and more difficult for artists of our era to attract the support of a major label because pop music is being made for younger and younger audiences. We've learned that it pays to give our audience what they want to hear - those old hits."

Another tour with a different line-up is being planned for next April, and Tony Denton claims that Eighties stars are queuing up to take part.

"Doing nostalgia gigs isn't too thrilling for you as an artist, " says Carol Decker, "but we're not big pop stars any more - we're middle-aged, with families and mortgages. I know they're only interested in my past because I haven't had a hit recently, but it's how I earn a living." 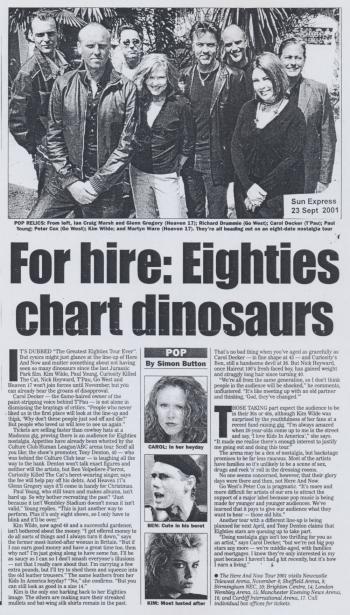