A blossoming career as a gardening TV presenter was an unexpected dream come true for '80s pop diva turned horticulturist Kim Wilde.
'I never thought for one second I would be doing this', she says excitedly. 'I didn't go off in search of another career but I was over the moon when the challenge of becoming a TV gardener came along.'

Move over Charlie Dimmock. With her pop career firmly behind her and gardening the new passion in her life, Kim delights in her role as a designer on daytime show House and Garden Invaders. Fame came calling for Kim second time around when she enrolled at her local college for a gardening course and TV producers unearthed her talent for garden design. 'Initially, I must confess, I didn't think I had the skill to make it on TV and I was extremely apprehensive about it', the 40-year-old confesses. 'But there was a big part of me which was excited by the challenge and deeply flattered I had even been asked.'

Kim first caught the gardening bug during the height of her pop career when she turned to the tranquility of her garden as a much-needed release from the demands of fame. 'When the madness of my career threatened to take over I would escape ot my garden and switch off from the world around me', she recalls. And she advocates the therapeutic power of gardening, insisting it gave her new found freedom and personal contentment when she needed it most. 'I made plenty of mistakes along the way but that's the prerogative of any gardener and no one frowns upon human error., Once upon a time I would have been crushed by failure, but through gardening I've found peace.'

These days the one time chart topper who scored hits with 'Kids in America', 'Cambodia' and 'You keep me hangin' on' is much more interested in donning her gardening gloves than mingling with the showbiz set. 'Looking back on it, I don't think I ever felt part of the pop scene. It never held much allure for me', she says. 'What I'm doing now makes me much happier than I thought possible. I loved being a singer but there came a time when it started to bore me and I needed a change.'

Although gardening has become Kim's first love, she doesn't rule out going back to her singing roots. 'There are a couple f '80s tours coming yp which I'd be very tempted to take part in. This time around, though, it would be for pleasure and not part of a gruelling promotional tour so it's an option I'm seriously considering.' Kim's settled home life has had much to do with her personal harmony. Happily married to husband Hal and mother of Harry, three, and baby Rose Elizabeth, Kim admits gardening and motherood were catalysts for change in her life. 'I wanted to create an environment whic hwould be happy and healthy for our family so gardening became a very important piece of the puzzle.'

Of all the horticultural projects Kim has undertaken, she explains that by far the most satisfying is the development of her own back yard in Hertfordshire. 'It's my greatest achievement', she says proudly. 'Each year it develops into something new - I never fail to be impressed with the changes which grow around me. I go out to my garden every single morning just to see what has pushed itself up through the ground overnight. It's totally awe inspiring and utterly beautiful. I feel humbled standing in my garden watching nature at work.'

And what advice would Kim offer budding gardeners everywhere? 'never be afraid to ask lots of questions. People who love gardening enjoy nothing better than talking about their passion', she says. 'And expect to make lots of mistakes. It comes with the territory, I'm afraid.'

Photo: Can you dig it? '80s pop star Kim Wilde returns to the spotlight this week with her Garden Invaders team. 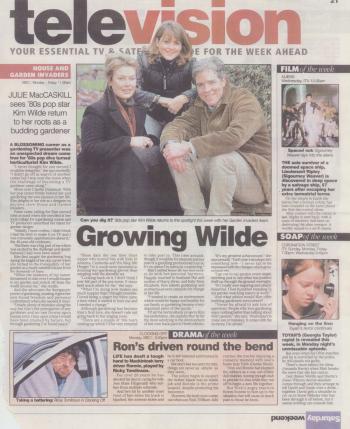