Most pop stars appear in concert to help cultivate their musical careers - but Kim Wilde is taking to the NEC stage tomorrow to finance her interest in gardening. Best remembered as a pouting pop princess from the early Eighties, 40-year-old Kim is taking part in the Here and Now nostalgia tour alongside Paul Young, Nick Heyward ,T'Pau, Go West, Curiosity Killed the Cat and Heaven 17.

But Kim is adamant this does not mark the start of a fresh assault on the pop charts. 'I'm not relaunching my career, these shows are a way of enjoying my past and being paid for it - enough to keep me in seeds for some time', she admits.

Kim shelved her music to get married, have children and pursue a love of gardening which has led to a leading role ni TV makeover shows in which she designs gardens for members of the public. 'I've just filmed 25 episodes of 'Garden Invaders', she reveals. 'And I'm currently attending college every week, taking a City and Guilds course in planting design. One of my designs even won a gold medal at this year's Tatton Park Flower Show, whcih was overwhelming'.

She lives with husband Hal Fowler and children Harry and Rose in a converted barn in Hertfordshire that is surrounded by a couple of acres of land which Kim has cultivated and planted. Although she last appeared professionally on stage seven years ago - in Tommy, where she met Hal - her interest in performing was rekindled by a charity gig at a small theatre near her home.

'It was a show featuring the tribute band Fabba and I was asked to do a few songs. It turned out to be a really hot ticket. I'd noticed that lots of Eighties clubs were being launched and there was an interest in Eighties fashions so when the offer of the Here and Now tour came up I thought 'I'd like to be part of that'.

'I'd bumped into Paul Young a few times over the years and I'd done a photo shoot with Nick Heyward for Smash Hits - a Christmas dating story! - but I was a real fan of the other acts. There's going to be a really good atmosphere there.'

But it's not all nostalgia for Kim. On her greatest hits compilation - The Very Best of Kim Wilde, released this week - is a brand new song, Loved. She explains: 'It was written by my brother but there are no plans to release it as a single, although they are raving about it in Europe.' 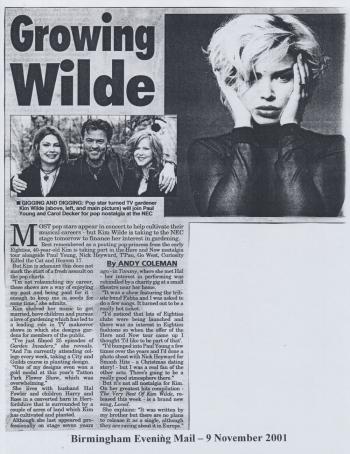