Hanging on the telephone with... Kim Wilde

Kim's gone from being a pop star to a garden designer and now presents Garden tnvaders for BBC1. She's also the face of Uvistat sun products. This November she goes back to her pop roots as part of Here And Now Tour 2001, an '8Os extravaganza. M gave her a bell to find out why the Wilde child has turned over a new leaf (sorry!)

What time did you get up?
Half seven. Harry's three and Rose is 18 months, so I had to get the Corn Paps and all that malarkey. I used to tie in for England - I was the Dormouse of Rock! But I don't remember the last time I had a lie-in.

Who was the first person you spoke to?
Hal - he'd been up working most of the night with a new production company, he's a bit of a night owl. He climbed into bed at half seven and said, 'Sorry, love.' He's great. Amazing. We met in January '96 at rehearsals of the musical Tommy, which we were both in, and married the following September. We met, dated and married within seven months.

Where are you right now?
At home in the garden in Hertfordshire, deadheading my marguerites. My garden's got a bit of everything: wild meadows, formal English cottage garden and tradition. It's a garden of rooms. You can go into the herb garden, the vegetable garden or the gravel garden. It's developing into a real wonderland.

What are you wearing?
A denim skirt from somewhere cheap like Oasis, and a little red top, which is rather more expensive, actually. I treated myself to it a few years ago and it's worth every penny. It's edged with red lace so it's a bit foxy. And brown wooden clogs. Always. I get a pair every year. Good for the garden, good for posture.

What's the last thing you bought?
Yesterday I dropped Harry at school and couldn't resist nipping into the local garden centre. I bought plants for my new planting area and a lovely, hardy palm. Most of my money is spent on plants. I was quietly loving gardening anyway, then I did a summer course just after I got married. And then I went back to college.

When was the last time you were drunk?
Oooh! I got drunk with Dave, my co-designer, when we won the gold prize at Tatton Park Flower Show. We, were drinking champagne initially, then white wine. I stopped counting after about the fourth or fifth. I had a chronic hangover. But a couple of dirty nappies can sart you out pretty quickly!

What's the most recent dornestic thing you've done?
It's constant. ridying up, picking up clothes, clearing up the kitchen. Several times a day. Hal trashes the kitchen every time he goes into it, it seems. I've always been domesticated, even without the children. But I don't do ironing. I'm very good at getting it out of the tumble-dryer before it gets past that crucial moment.

What's the last thing you put in your mouth?
A lavender mint, I've got a tin of sweets that someone gave me, and I had one in the car on the way home. I'm not bad. l know all about what I should be having, even when I'm not, but diet's not something I pay much attention to. Hal and I have to be away for us to sit down and eat dinner. It's just that parent trap you get into.

When did you last have a snog?
A few nights ago. Hal is extraordinarily romantic, he writes beautiful poems for me. He's lovely, very attractive. Someone might describe him as mad, bad and dangerous ta know. He's unpredictable, and really good fun, very funny. And very dirty! He's got such a filthy mouth. Also, he's very sexy. Lots of my friends think he is, too.

When did you last cry?
When we won the gold at Tatton, I was overwhelmed. It's like getting a Michelin star. It was live on television, too. I'm very much an emotional person anyway. And PMT has reared its ugly head more and more as I've got older. It's very odd. I've noticed in the last year or so that I actually don't feel I'm me at all for a few days.

What are you going to do when you hang up?
Have a barbecue. My brother's come over, and Mum and Dad might pop round. Hal's all shorted up, the coals are on, he's just put the meat in the marinade -he likes cooking - and 1'11 make a salad. I've just made a gorgeous Pimm's with borage flowers and mint from the garden. It's going to be a lovely evening, really lovely. 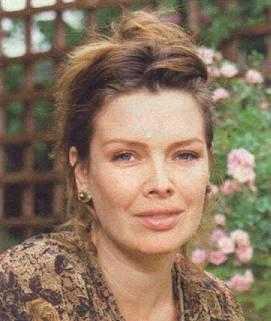