Kim Wilde doesn't have a bad life. She lives with her husband and children in a converted barn in Hertfordshire that is surrounded by a couple of acres of land, at the end of which is a trappers' hut she uses for Good Lifestyle escapes into primitive living. Most of the land has been turned into a garden by Wilde, which is how she learned the trade that has seen her move from pop star to television gardening presenter. And everyone has fond memories of Wilde's long string of hits, from Kids in America in 1981 through to If I Can't Have You in 1993. Even more memorable for some were the videos that accompanied them.

'There's something faintly humorous about doing the old songs again', she says, reflecting on her upcoming tour of England. 'I'm 40 and a mum of two and I'm going out doing stuff which I did when I was 20, when everyone had pictures of me on their wall. If nothing else it'll keep me in seeds for a while.'

She doesn't seem to be taking the whole thing too seriously, and apparently never did. 'It was great fun', she says of her pop heyday. 'Wearing nice clothes, being spoilt rotten, being put on planes, and generally having a crack. It was ridiculous really. But contrary to how I may have appeared, I was fiercely ambitious at the time. When it happened I was ready to run - I could see that it was my chance. I know a good thing when I see it, basically.'

Now she's settled well into the rustic life. 'You get seduced by the landscape here, and I wanted to look out onto a treeline and know what the trees were. I'm going to college every week doing a City and Guilds in planting design. I've done 25 gardens this year, and any spare time is spent out in the garden, either planting or reading a book. That's quite amazing to me. It's far more interesting than my old life. I think gardening is beautiful and sensuous, and before I felt that I was being controlled by the public, especially when they refused to go out and buy my records. I also now realise that the pop world was interested in me least of all because of my songs.'

But a trawl through some old records, stacked away in a locked cupboard to be protected from the innocently destructive hands of children, brings back happy memories. She pulls out 1980s 12-inches with enthusiastic delight, finding loved, long-forgotten records once more.

'This is a good one', she says, 'Souvenire by OMD. Do you remember that? Scritti Politti. Sade, I love her. Etienne Daho, he was a bit of a heart-throb. All of Elvis Costello's albums here. Earth, Wind and Fire - I used to do the ironing to that one. Children stop you doing this. You get a bit pissed and forget to put back the records, and before you know it they've been eaten.'

Out from the stack emerges the first album Wilde ever bought, the debut by disgraced former superstar Gary Glitter. 'I loved him. It was nothing less than love that I had for him.'

A few years later, Todd Rundgren's records inspired her to give songwriting a go. 'I moved to London, got a four-track Portastudio, and faithfully replicated my favourite songs of his as a way of trying to learn to write. You can do a lot on a four-track.'

Tommy by The Who is discovered - 'big album for me, and this is the original version here' - then quickly put away again as opening the gatefold reveals a message of a personal nature Wilde scrawled to an old boyfriend on the sleeve.

A copy of Swords of a Thousand Men by Tenpole Tudor is signed by 'Bob'. 'A bit of a flame of mine at the time was Bob. There he is', she says, pointing to a pouting, black-haired band member. 'Good old Bob'.

The Velvet Underground's Loaded and Lou Reed's Rock and Roll Diary spill out. 'Lou Reed's music was so far removed from my experience of life - living in the countryside, nice middle-class girl, not interested in drugs remotely, went to a nice school and did nice things - just not the type of girl you would expect to be at home getting off on listening to Lou Reed singing about heroin. I really loved that Berlin album. I saw him once backstage, and he seemed like this small, frail, private person, not the wild rocker you think of - but definitely a weirdo, and I like weirdos'.

There's also a copy of Diversions by Marty Wilde, Kim's dad's foray into psychedelia. Her father, a pop star in his own right in the 1950s and early 60s, ensured that Wilde and her brother grew up in a musical environment. He even wrote a couple of her biggest hits, Kids in America and Chequered Love.

'He would have Elvis and Frank and Dusty in Memphis, but then he'd also go out and buy the new Kraftwerk album so it was right across the board. I would listen to his Carole King and Joni Mitchell and realise that I wanted to write songs. And my dad started off as a pop idol and became a songwriter, so he gave me faith that pop music could be a good thing in your life.' 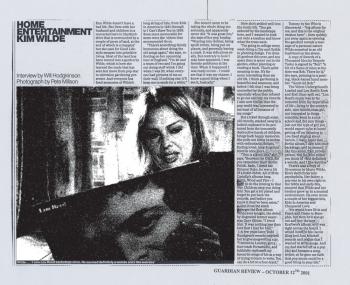