How to prune perfectly

Kim Wilde shows you how to trim your trees and plants - be it for shape, health or growth.

Pruning is a job that can often intimidate gardeners. Many people are wary of doing it at all, worried they could cause pemlallent damage. But, in fact, it's almost impossible to do any real harm. At the very worst, you may sacrifice flowers for a year, but you'll greatly improve the overall shape and performance of the plant in the long run. My advice for you to get the best health, shape and general performance out of your trees, shrubs and plants is to grab yourself a pair of the sharpest secateurs and just go for it!

Pruning for health
Always cut damaged, diseased or dead wood back to a joint, to a position above a healthy bud, or to the ground. Plants are always much more susceptible to disease when they're in poor condition. Pruning to maintain health also includes removing all shoots that are thin, weak or rubbing. These often develop in the centre of trees or shrubs. Removing these allows strong shoots to devdop unhindered and real1y thrive.

Pruning for shape
Sometimes awkwardly shaped shoots will upset the overall balance of a tree or shrub. These should be cut out completely. A useful thing to remember is that strong shoots can be lightly pruned, while weak ones benefit from hard pruning, which will stimulate growth. Hard purning vigorous growth just encourages even more vigorous growth and so contributes to the problem of an uneven shape.

Pruning for effect
This is the real key to producing the best performance of any plant - whether it's for fruit, foliage, flowers or stems. As a general rule, the best time of year to prune is that which allows the maximum growing period to the next display. For example, Comus, which are grown for their stunning winter stems, can be cut down to the second bud from the base in March. This will give them the maximum time to gain growth for the following winter's display.
Comus alba 'Sibirica' and C. stolonifera 'F1aviramea' look great planted together, giving a vibrant display of glorious winter stems. Willows, too, can also be treated in this way - Salix alba vitellina 'Chermesina' features carn1ine-red young winter shoots. Both comus and willows prefer a heavy, damp Soi1 and look really beautiful planted in varied groups near a water's edge.

Pruning evergreens
Very little pruning is generally required for evergreen trees and shrubs - they simply need dipping to shape. Mid-summer is a good time to do this. Cut out the youngest growth and try not to cut back into the old wood. Where possible, conifer hedges, such as x Cupressocyparis lawsoniana, should be pruned with secateurs rather than shears - cutting across the leaf spray on conifers wi1l turn the remaining leaf brown. This a1so applies to the spotted laurel, Aucuba japonica. Secateurs are more suitable for small-leaved plants such as box, Buxus sempervirens, and privet, Ligustrum ovalifo1ium, which should be trimmed in spring after the frosts and then again during summer.
Most flowering evergreens, such as rhododendrons and heathers, should have the faded flower heads removed and shoots shortened at the same time.
Lavender, ceanothus and broom all resent being pruned back to old wood. To stimulate flowering, trim them up in early spring, and then prune them again after flowering.

Pruning climbers
Most climbers need training and routine pruning to keep them to a manageable size and to encourage flower growth. A useful rule for flowering climbers is to prune them in spring and early summer when their blooms fade. Those flowering later in summer usually do so on the current year's growth. To encourage this, prune in late winter, removing all dead and damaged wood, and shorten growth back to a healthy, outward-facing bud. Evergreen climbers can be trimmed in spring. Omamental vines and other deciduous climbers grown for their foliage railier than their flowers, such as the Vitis vinifera 'Purpurea" may be cut back to sbape in winter.

Spring pruning
Shrubs tbat flower on stems made the same year, such as lavatera and artemisia, bave no need of old wood. A1l old stems should be pruned back hard to make way for next year's new flowering shoots. This also includes the super late-flowering Caryopteris x clandonensis, the ever-popular buddleia, Spiraea japonica and Hypericum calycinum.
Both mophead and lacecap hydrangeas are best pruned in spring -old, dead flower heads will protect the delicate buds and shoots during a severe late frost. These hydrangeas will flower on shoots formed the previous year. F1rstly, cut out any unproductive branches to the ground, then cut to just above the first strong pair of buds beneath old flower heads.
Forms of the Hydrangea paniculata flower on the current year's growth and need cutting back to one or two buds from their base.
Climbing hydrangeas H anomala petiolaris can be pruned in summer to remove or shorten any unwanted shoots. Plants grown for their foliage, such as Catalpa bignonioides (Indian bean tree), eucalyptus, cotinus and Ai1anthus altissima (free of heaven) wil1 respond well to a hard prune in spring.
Although this prevents them becoming large trees or shrubs, it wil1 result in larger leaves. To avoid gaps in the border, only cut back half the shoots and just shorten the remaining half by a third. The following year, hard prune the shortened stems and leave the others.

Pruning roses
March is the best time to prune hybrid perpetual, floribunda and tea roses. Cut out diseased, dead base to encourage nE or thin wood and trim back the main shoots. When cutting back these shoots, count buds from the base of each sl:Ioot and cut just above the second or third one. Do bear in mind that the length of shoot is less important than the number of buds.
Shrub roses should be pruned in winter. As both modern and old roses produce most of their flowers on shoots that come from old wood, prune lightly. Remove dead, thin and decayed wood and shorten main stems by one third. Prune rambling roses in autumn. Cut untidy flowered shoots right down to the base and tie new shoots to the trellis. If there are only a few new shoots, leave some of the flowered shoots in place, cutting back just a little.
It's best to prune climbing roses in autumn. Remove any crossing or thin shoots, and reduce the height of the main stems by about one third. Remove any side shoots that spoil the shape and cut back others by two thirds.
Prune miniature roses in March. Remove bad wood and trim back the main stems to about one third of their length.

Tips on when to snip 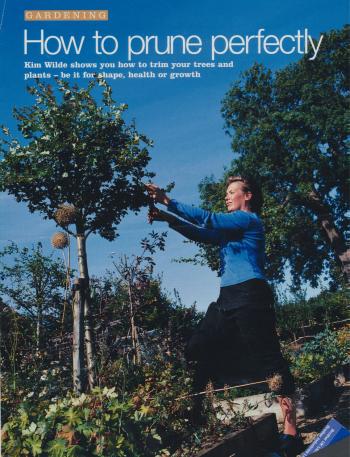 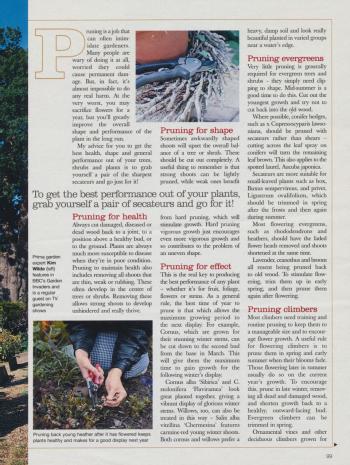 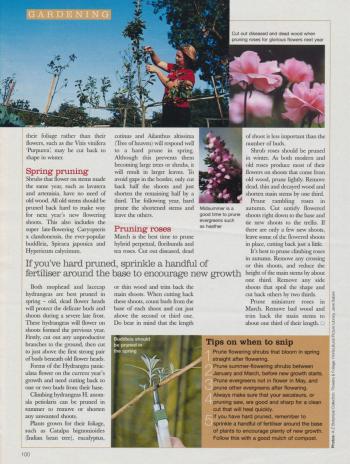