Singer Kim Wilde is one of the high profile patrons of the Hertfordshire Breast Unit Appeal, to build a dedicated unit for the treatment of women with cancer and other breast diseases. A Hertfordshire girl since she was eight, the charity appealed to Kim because the unit will be near her home, a 19th century renovated barn near Codicote.

"It's a local charity and I am very interested in getting involved locally with things where I can see results", she said. She was very impressed by Vicki Adkins, who set the charity up after being treated for breast cancer herself at the QEII Hospital in Welwyn Garden City, where the unit will be built.

"She has been so tenacious in getting this thing together and creating a place where women can go and feel secure", commented Kim. She has no personal experience of breast cancer but is well aware that fear of the disease is constantly at the back of most women's minds. "You never know when it may affect you or someone in your life", she said. "It would be a great comfort to you or your family that somewhere like this unit will be up and running and at full speed to help you at such a terrible time."

Forty-year-old Kim, the daughter of singer Marty Wilde, grew up in Tewin and went to the village primary school and Presdales in Ware. Her first single, 'Kids in America', was a major hit and she went on to release 10 albums and 30 singles as well as touring with Michael Jackson and reaching number one in America with 'You keep me hangin' on'. In 1983 she was voted Best British Female Singer at the BPI (Brit) awards and 12 years later played the lead in the musical Tommy for 12 months, where she met her husband, Hal.

In recent years she has forged a new career as a gardener, after taking an horticultural course while pregnant with her son Harry, now two years old. She also has a small daughter, Rosie.

Kim appeared as a guest designer on ITV's Better Gardens and has recorded 20 episodes of BBC's Garden Invaders, due to be transmitted this spring. 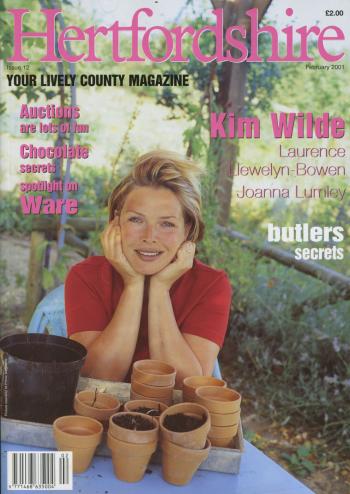 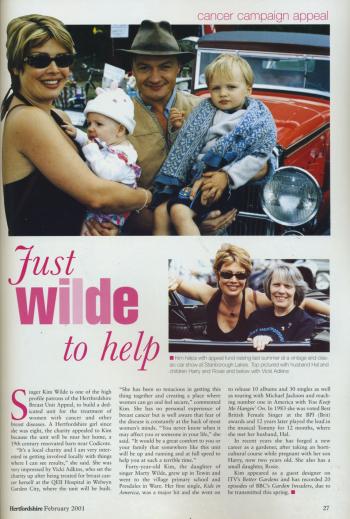