Kim goes back to her roots

With horticultural programmes putting down roots in most TV schedules and their presenters becoming stars in their own rights, gardening can now claim to be the new rock 'n' roll. But pop star-turned-celebrity garden designer Kim Wilde is swapping her secateurs for a microphone one more time for a 1980s music reunion tour.

Mother of two Kim, who lives in Tewin, will be joining the likes of mullet-haired heart-throb Paul Young, soft rock balladeers T'Pau and Clockwork Orange-inspired Heaven 17 on the seven-date Here and Now Tour 2001, including Wembley Arena on Thursday November 15.

Kim - whose pop career featured more than 30 singles, 10 hit albums and a tour with Michael Jackson - spoke to the Mercury shortly after returning to the UK from sunnier climes filming for BBC1's Garden Invaders. 'It's already been a pretty full-on year', she said. 'We've just been doing a show in Majorca which will be the first in the new series. It was really made difficult by the logistics of getting materials and the availability of plants.'

Inspired by the gardens of her youth in Tewin, where she moved when she was eight, Kim - who made a name for herself in front of the cameras, second time around, in Better Gardens - is finishing a City and Guilds in planting design. Now she has surprised and delighted fans by returning to the music scene as part of the sensational line-up, proving that music in the Noughties is only half as good as it was in the Eighties.

'I'm really looking forward to it - it's been a long time coming', said Kim, whose father, Marty, was a chart music heart-throb not long after rock 'n' roll first blossomed. 'I've previously always been a bit suspicious of '80s reunion concerts, but this has been a good year for revivals and I seem to have figured in it all a lot more than I was aware of at the time. I'm really chuffed to be included among all those great names and I think that would be a nice way to finish off my 40th year.'

Timed to coincide with the tour, all Kim's hits have been gathered up into a greatest hits album released on Monday, complete with the anthemic Kids in America, 1986 smash You keep me hangin' on and a new song, Loved. But the star, who went to Ware's Presdales School, is refreshingly honest about her future ambitions and the new recording.

'It's a sweetener for the album', she said. 'I don't have any ambition to reignite my pop career. I'd be perfectly happy just indulging in all things horticultural and trying to get the kids to school on time.'

And now that her popularity as a gardener is booming, nor is she about to up sticks and leave the converted 16th-century barn she shares with actor husband Hal Fowler and children Harry, 3, and Rose, 18 months. 'I enjoy the close-knit village life in Tewin and it's great when you've grown up in a community like that to have even wider access to it now I have more time. ' 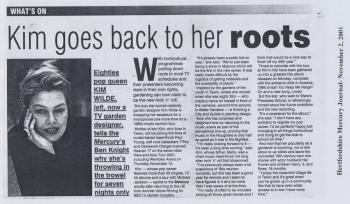