Kim Wilde: "I have my most relaxed moments in the garden"

Kim Wilde is a little bit surprise by the unexpected success of her new single Loved and the media attention that comes with it. But she accepts it gracefully. Twenty years after her first hit Kids in America she's released a compilation cd called The very Best of and she has just finished a tour (the Here & Now Tour 2001) across the United Kingdom with other stars from the '80s such as Paul Young, Heaven 17, Go West and T'Pau. The years have barely made a mark on her (she has gained some weight, but who hasn't in the past twenty years?) and she has a smile that would even make the Taliban surrender.

Twenty years ago I was 13 years old and gave my first French kiss to a girl with Kids in America in the background.
Wilde: "Wooow, that is a nice memory!"

I presume many people are telling you stories like that now?
Wilde: "Yes. It's like Kids in America has found its way into the lives of so many people, more than I could ever imagine. I heard that Atomic Kitten has done a version of Kids in America and that they get a lot of response to that one. The girls are totally crazy about me and now I get invitations to meet them! Very strange!' (sniggers)

Did you think you would stick around for so long, twenty years ago?
"I was 20 when Kids in America became a hit and I thought I'd made it for good. We had a big wall at home and I hung my first gold record on it, in the top left corner. I left the rest of the wall open, thinking that I would be able to fill it up with forthcoming gold discs. That wasn't arrogance, I just believed in myself! The wall is now full. I was of course surrounded by my father and my brother who'd already done their thing in music. To answer your question: there was no doubt at all that I would be around for a while. Although I did have my ups and downs and my career was a lot like a rollercoaster ride."

What convinced you to go on tour with all those '80s stars? Was it a kind of solidarity between you all to show the younger generation you could still do it?
Wilde: "I can't speak for anyone else - I accepted without talking to them - but the promotor did me an offer I couldn't refuse. (Wide grin) That's a good reason, isn't it? A second good reason was that I was a big fan of all the other artists and that it was a challenge to get on stage with them. I felt that the interest in the '80s was growing early on in the year."

Where does it come from? In the '90s everyone wanted to forget that decade, the music most of all.
Wilde: "That music has rested for twenty years now. In the end it was a very innovative and fresh musical period with strong personalities. The dance music, of which I am a fan by the way, is a bit anonymous and I think people do want to be entertained. Just look at the popularity of Robbie Williams, for instance."

Was the Here & Now Tour a one-off project for the United Kingdom alone?
Wilde: "We start again in april with Adam Ant as a headline act. Adam was one of the biggest entertainers of the '80s and I would love to tour around Europe with him and some others. Adam was my hero! He visited me backstage at Wembley and he looked great! Years ago I was madly in love with his image and he was in love with mine. One day we met and we had absolutely nothing to say to one another. (laughs out loud) That's how it goes..."

Is your new single Loved a new start?
Wilde: "Loved turned into a hit by coincidence. A very nice coincidence, but I have no record deal and nothing else is planned. I have two young children which I'm responsible for. I am drinking a beer and enjoying myself here in Belgium, but I am missing a party of my son. I do feel bad about that. When I go away again, I will miss a lot of such parties and I don't know if I want that. On top of that, my future is in gardening. I am determined to get my grade in horticulture, I have a gardening programme on the BBC and I want to write books about it."

Where does this gardening come from? I can't find the link between that and rock-'n-roll.
Wilde: "O, but a lot of musicians do gardening. Adam Ant for instance is totally hooked on his garden."

Is it something typically British, then?
Wilde: "It definitely is. (Begins a passionate, but very technical story about the emergence of gardening and the British role in it, ed.) For us it's not uncommon. Add to that the fact that I was raised in the countryside with the smell of flowers and herbs. In the pop circuit you're so far away from those things that it's nice to return to them when you get soem rest. I have my most relaxed moments in the garden. My ambition is to make a kind of Garden of Eden for my children. I want them to grow up in Shangri-la. I got out of music because I couldn't speak as passionate about music anymore as I can about gardening now." 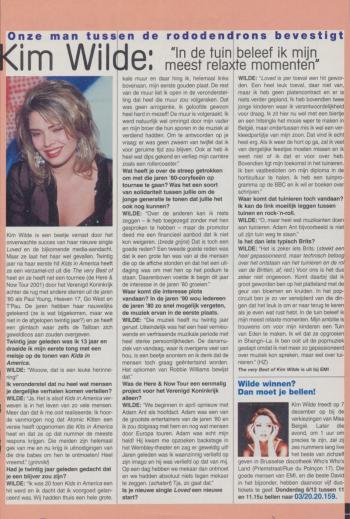