She was once dubbed the Brigitte Bardot of the pop world. It was never an image Kim Wilde was happy with, as she tells Showbusiness reporter Gordon Barr in an exclusive interview.

Kim Wilde chuckles, perhaps a tad nervously. I've just told her she was my first teenage crush, and very sweetly she replied: 'Oh, that's nice'.  For 30 years, I'd dreamed of interviewing the blonde bombshell who had a string of hits in the 1980s and early 1990s. So I wasn't going to pass up the opportunity to let her know the effect she had on me.

'I wonder if you think the same now', she laughs. Truth be told, I'll always have a soft spot for Kim Wilde, which is why her gig at Newcastle's Telewest Arena tomorrow night as part of the Here and Now tour is one of my must-sees of the year. Her hair ma ybe darker these days - 'although I may go platinum again for the tour' she says - and the may be more at home in the garden than the recording studio, but she still has that something about her.

'I was never happy with the sex goddess type image', she reflects. 'It wasn't really me. It just kind of took off and I lost control of it. It used to get me down. All this stuff was happening around me, and I had little say over it. And if I put on some weight, it was all over the papers. It could be sould destroying and it very nearly did destroy me.'

Despite having success most singers only dream of - from her debut Kids in America in 1981, Kim had a succession of wrldwide hits and toured with Michael Jackson - by the early 90s the daughter of 60s singer Marty Wilde had had enough. A string of disastrous love affairs, the pressure of fame and that old weight problem resulted in Kim abandoing the pop career and seeking new avenues. She starred in the musical Tommy, where she met a young actor by the name of Hal Fowler. Romance quickly blossomed, followed by marriage and two children, Harry, now four, and Rosie, two.

'The last thing I expected was to go into a West End musical and meet the man who was going to become my husband and the father of my children. It all happened so quickly', says Kim. 'I've always believed that it could happen like that, because that was the way it happened for my own parents. I was brought up on that fairy tale. After we got married, I had this feeling that we would have a family rather quickly because I was dying to have kids with Hal.' And so Kim became something of an 'earth' mother, developing a love of gardening while enjoying motherhood and going to college. She is a regular on the BBC's daytime Garden Invaders show and is happy to be filmed in her wellies, jeans and jumpers. But she'll be bringout out the rock chick in her again at the Arena tomorrow.

'I'm a bit nervous, but not overly so', she says of the tour, on which she shares the bill with the likes of Paul Young and T'Pau. 'I presume anyone who is there is there because they want to be, and to remember the 80's. So I'm looking on it more as fun than anything else. I'll be going home most nights, so I won't be awa yfrom the children for too long.'

So why now, for Kim to go back to the pop world? 'There's a lot of interest in the 80s and I'm getting paid good money for it, so why not? I'm doing it for fun. I don't know what I'll wear. I'll need to see if I can still fit into my leather trousers. I've lost a big of weight recently, so fingers corssed. I've still got a lot of the gear from the ear, but I've given much of it to charity.'

The 40-year-old is obviously very content with life these days. She's chirpy, funny and happy in herself.

'Life is good', she smiles, juggling the interview with trying to keep Harry and Rosie amused. 'I went through those bad times and have come out of it with my head held high. I'm also happy with my weight. I obviously put on some when I had the children, but I've now lost that. I exercise regularly, and really the weight thing isn't that important to me. I find all these pencil-thin people very worrying. It's not healthy. Just be happy to be yourself.'

The burning question, though, is whether or not Kim will try a stab at a pop career proper after the Here and Now tour.
'Never say never', she says. 'The kids are getting a bit older now, but, from now on, family comes first - always.' 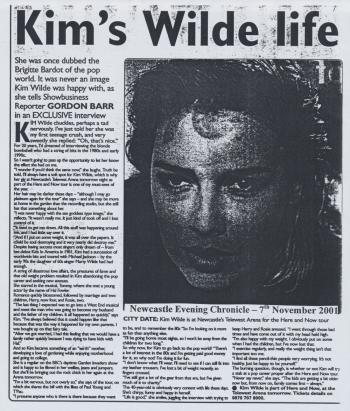