Live and in the flesh

It's 1986. Strutting my stuff at the under-18s disco in my lemon polo shirt, pink cardigan, shiny, flecked grey trousers and red patent shoes, I was really cool. At least I thought I was cool.

How fashions change. Tonight's impressive line-up of stars from the 1980s have opted for black in a big way. Gone are the big hairstyles and the fashion victim pastels - taste has pervailed. Nick Heywards is blasting out Haircut 100's Fantastic Day to rapturous applause. The years have been kind to him as they have to most of tonight's performers, all of whom keep their sets brief.

Go West's Mick Cox is sharing his birthday with the crowd tonight, but not his age. His voice still in fine voice, We Close Our Eyes has the CIA singing every line, most of the audience matching him for years and then some. What we are experiencing is better than any greatest hits package or the endless stream of retro-TV shows with Stuart bloody Marconie harping on about how great it was to be him in that year. It's in the flesh and for a moment we can live it again through the songs.

As the evening moves on, most of the stars have opted to replicate their former glories note for note. Not Heaven 17 though. Glenn Gregory marhces confidently onto the stage and asks what we want to hear. Oddly enough all the crowd want is Temptation and he tricks us by singing the opening lines before lurching into (We don't need this) Fascist groove thang which was sadly never a hit. Heaven 17's attempt to give their material a contemporary feel leaves the crowd a little bemused. It sort of works.

A short change over and we are treated to Ben Volpeliere-Pierrot from Curiosity Killed The Cat. he still mves and sounds as if nothing has changed. Name And Number, Down to Earth, Misfit and Hang On In There Baby is the lightest, most economical set of the night.

The two big solo stars are yet to make their entrance. Kim Wilde and Paul Young are the evening's climax. Kim is dressed head to toe in leather, still looking great, and afer a shaky start proves her lungs are as capable as ever. She leaves Kids In America till last, but You Keep Me Hangin' On and Never Trust A Stranger do not disappoint.

Paul Young opens with Wherever I Lay My Hat (That's My Home), his only number one, and he crowd are lapping it up. He looks pretty damn slick and throws out the hits Come Back And Stay, Love Of The Common People beofer the grand finale of Everytime You Go Away, when all the Here And Now stars join him on stage. And if that isn't enough, look out for Here And Now 2002 next April when Adam Ant and Spandau Ballet will go through the motions in the name of nostalgia. 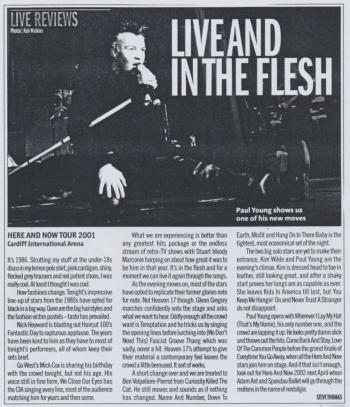