Kim Wilde is the first to be surprised to see her single Loved becoming a hit. She had really stopped singing six years ago...

BRUSSELS - During a short visit to Brussels within the framework of the Miss Belgium election evening, Kim Wilde showed herself astonished by the charitable greeting of our country for her single Loved, new track on the Very Best Of album that EMI-Music has just published. "It's six years now that I put an end to my career, but I must admit that the success of this song, like the eighties tour which I did with Paul Young amongst others, made me recall how much I really like to sing. And it is easier today because my voice is finally mature - it is what has happened at 37, 38 years and I have just a few years more (smiles) - and it has a power which it never had."
With her boots off and being posed on one of the sofas of her hotel room, the love blonde details then the reasons of leaving her trade, in the middle of the Nineties. "I think it's really simple in fact. At the time, I really think the public started to have enough of me, and I started to dislike being Kim Wilde. I needed to become somebody else and, miraculously I would say, I met Hal, the man of my life. At which point I diverted all the passion I had for my profession with no problems. As of the moment I found him, I did not want to sing and, especially, write songs anymore. In the past and even if people did not realize it, there were very personal things that I wrote in my lyrics. But what I share with Hal, I do not want to share it with others."
With her cherished Hal (producer of musicals), the artist hastened to make up for lost time, married and had two beautiful children, Harry, soon 4 years, and Rose soon 2 years. And on top of it all, she changed her daily occupation, as much as it is an absolutely different thing.
"In England, I became more known to make jardlns than to make tubes. With a team of eight professionals, I design and carry out gardens of the domestic type and, in order to do that, I have even returned to school. These two last years, we conceived not less than fifty gardens. It is a hobby which fascinates me personally, even if I know that some find that odd".
And when Kim plunges back into her past life, she falls down on photographs of herself at 20 years - with her wild hairstyle and her make-up, does it make her feel strange?
"No, but it enables me to remember to which point I was naive and distressed. The one I am now sometimes wants to reassure the one I was then, to say to her that all will be arranged and that all is not used for nothing to carry all the misery of the world on her shoulders. My youth makes me think has that of my small sister who today is 22 years old and which, like me at the time, worries and suffers much."
Friday December 7, Kim Wilde appeared in Who's Who's Land in Brussels and ravished all the thirty-something nostalgic ones. But she, does she have the heart which grips when it hears Kids in America, Chequered Love or Cambodia?
"No, because, I feel someone new, it is as if these songs were new... My past, I have fun with it, but by no means do I intend to recreate it, or reanimate it."
And her friendship with Laurent Voulzy, with whom she recorded My nights without Kim Wilde in 86, will that be recreated? "We never ceased being friends, but it's true that we have not seen eachother since six or seven years. When I saw him again at the election of Miss Belglque, he reproached me for not having called him and that made me feel badly at ease. Physically, Laurent did not change a hair and his true art is that of the real life." 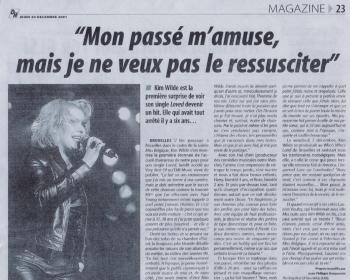 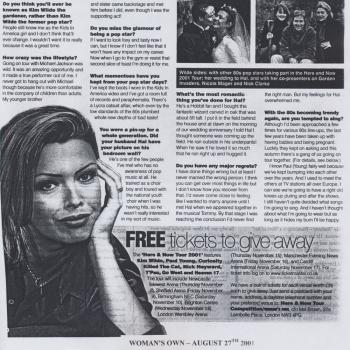 A minute with... Kim Wilde