They may have started to fray around the edges but seven of the 80s' best pop acts proved they can still party like it's 1985. Carol Deceker of T'Pau kicked off proceedings with a lung-busting version of Heart and Soul, but her spine-tingling performance of China in your hand was an early highlight.

Nick heyward of Haircut 100 gave a lacklustre performance but that didn't stop the crowds dancing to Love Plus One and Fantastic Day.

It was up to Go West to rescue this outsized school disco, and soon fans were dancing to forgotten pop anthems like We close our eyes and Don't look down.

Synth-pop kings Heaven 17 revived the true sound of the 80s with hits like (We don't need this) Fascist Groove Thang, Come live with me and Penthouse and Pavement. The crowd ignored security guards as they went wild in the aisles to a true club anthm - Temptation.

Ben of Curiosity Killed the Cat, looking as he did in 1987, wowed fans with their hits Down to earth, Misfit and Name and Number. But the Queen of the night was undoubtedly a leather-clad Kim Wilde who stunned the NEC with her first performance there in over ten years. Barely pausing to draw breath she rattled off a jukebox of hits which included Chequered Love, View From A Bridge, You keep me hangin' on and Kids in America.

That was a tough act to follow and headline Paul Young struggled in places to top Kim's set, but his epic encore of Every time you go away which reunited all the acts for a Live Aid-style finale was simply perfect. 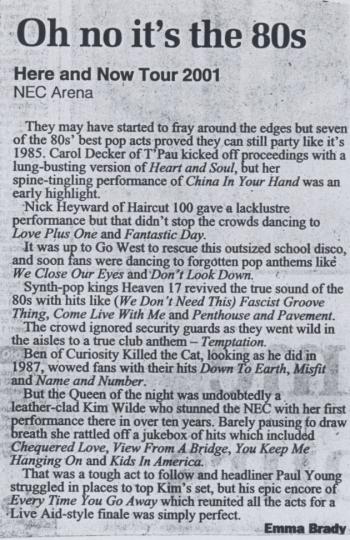