Check out former rock chick Kim Wilde's latest spring makeover - and we're not talking beauty or fashion - but she does suggest a haircut, with shears!

After enjoying a string of huge hits, you expect Kim Wilde to be talking about fashion and life on the road with Michael Jackson (she was the support act on his Bad tour). Instead, she's on about herbaceous borders and pruning trees.

But these days Kim - who looks at least 10 years younger than 40 - is a happily-married mum-of-two who presents a garden makeover show. Later this month, she hosts Garden Invaders, a BBC quiz show where she and her team design gardens against the clock. Each week Kim visits a family in desperate need of horticultural help and is given 12 hours to organise a makeover. The family can accumulate garden goodies by answering a set of tough questions. The more they win, the more dramatic the transformation.

"When they told me I had to do 20 gardens for the series I was terrified!", grins Kim. "But I think everyone was happy with what we did". As well as her TV commitments, Kim has year-old Rose and Harry, three, to take care for - plus she is learning planting design at a local horticultural college.

Kim's own garden is a wonder of plants, vegetables and flowers but a handful, though her hubby Hal, also helps out. "We have a one-acre garden, then a two acre field which we have recently started planting", says Kim, who lives in a gorgeous four-bedroom, 16th century converted barn in Herts. "The one-acre garden is south-facing and runs along the wall of our home. We don't use pesticides and we try to be as organic as we possibly can because I think it is good for our land and makes the food taste better. We have had problems with vine snails, which eat root systems, but I am going to try an organic solution: nematodes, which are tiny white worms that feed on the weevils. At the end of our garden we have a meadow of cowslips, daisies and little wild flowers. We also grow apples there which  Ipromise I'll turn into crab apple jelly... one day! Near that we have eight raise vegetable beds. That's where you cut up the soil in squares. They get plenty of air into the soil and roots as you are not stepping on it all the time and packing it down. We have a formal herb garden near the house, which attracts the sort of insects that benefit the rest of the garden and where we grow sage, marjoram, tarragon, parsley and bergamot in different shades. I love having plants like lavender and comomile near to our home too because they smell so lovely and are very calming. We also have a pond full of animal life - fenced off as Harry's so small. I love the woods round our garden, and in the bit that belongs to us, Hal and I have planted lots of trees - oak, chestnut, hornbeam, hazel and birch."

One of the benefits of good gardening is healthy eating. Kim's a good advert for it, though she hasn't always kept her figure. "I once put on 2st and went from size 10 to 14", she admits. "I was on the road, bored, a bit lonely and a little depressed. I was also a little too fond of my food and wine! But now I don't think about food and on't have a problem with my weight. I don't diet, I just eat healthily, including veg from our garden. But I include treats too, like takeaways! It's lovely picking produce with Hal and Harry. Some of Harry's first words were berry, garden and flower."

So what is Kim Wilde's advice to green-fingered Sunday readers wanting to get gardening this month? "You can start by doing a bit of pruning and tidying - most plants respond well to a haircut", states Kim. "April is also a great time to plant seeds. You don't have to have lots of land to grow plants and flowers, you can do it in a window box on a patio in your backyard if you like. You don't have to have lots of money either. I found some great packet seeds in Tesco the other day for a couple of quid, which included varieties of runner beans which flower in pretty colours like pink, cerise and white. If you have not got much space, go for a flowering vegetable like that, so you get double the benefit. You can also grow herbs in containers and keep them on your windowsill to use in cooking and make your home smell good. But if you live close to your neighbours, give yourself a bit of privacy and colour by growing nasturtiums on a trellis up the wall, which look lovely. Or try early flowering plants like clematis."

Kim's a great believe in getting kids interested in gardening and the environment at an early age. "Growing your own fruit and vegetables is very satisfying and great fun for children", she says. "You can start them on something simple like runner beans or give them ther own little vegetable patch if you have the space. Then they can make their own salads and fruit desserts." 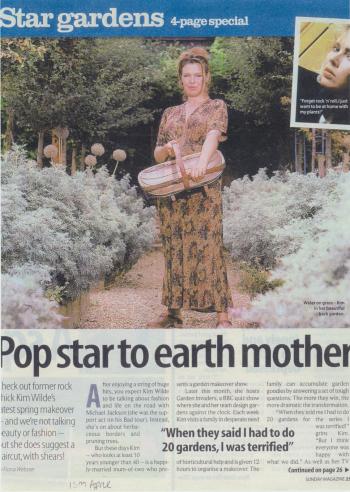 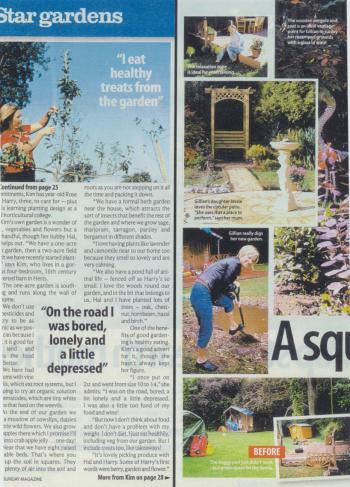 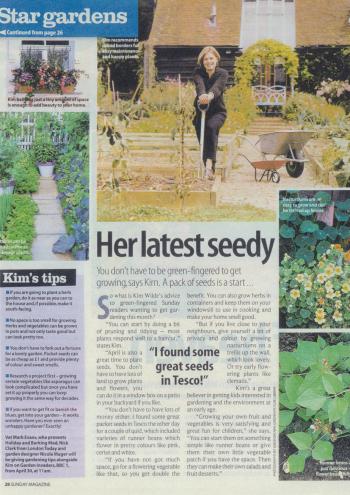