The eighties pop star turned garden designer would love Chris Tarrant's job, would challenge Eddie Izzard to match her pout, and recalls an unlikely photographic session with a giant frog.

What have you been recently enjoying on TV?
I found BBC 1's Son of God fascinating. It brought to life the story of Jesus as a man in such a realistic way.

What is your first memory of TV or radio?
I remember being very moved by the theme tune to Coronation Street. When I was about four, Mum and Dad would always find me in front of the TV with tears in my eyes.

Whose TV job would you most like to have?
I wouldn't mind being Chris Tarranton Who Wants to Be a Millionaire? Or better still, I'd like to be a contestant!

Whom do you find sexy on TV?
Jamie Oliver, because he's happy and positive.

Complete this sentence: "I wish..."
...no one hurt children.

Who would you like to play you in a film of your life?
Eddie Izzard. I'm not sure he'd come up to scratch on the pout, but I know he'd have a darn good try.

Who would you vote to be the first President of Earth?
Definitely a gardener, as they would have an ecological take on the wellbeing of the planet.

Can you remember your worst review?
I don't remember the wording, but it was particularly vitriolic. It made me feel empty for hours afterwards. In those days I took everything very personally; now it's all water off a duck's back.

What would you be doing now if you hadn't made a career in music?
I always feIt I was destined to be involved with the pop world. Prior to that I went to art college, so definitely something creative. Now I'm designing gardens I feel as though I've come full circle.

Where do you see yourself in ten years' time?
As a wiser and more productive gardener. This is one of the few professions where you can still be of some use when you're 83!

What would you most like to change about yourself?
Nothing. With all the imperfections, I'm quite content with my lot.

In the event of a natural disaster what would you rescue from your home/office?
My box of poems from my husband, Hal Fowler. He wrote the first one after our very first date and he's written me many more since.

If you could choose, which cultural or historical figure would you like to be?
Gertrude Jekyll. She was a great plantswoman at the turn of the century and pioneered the use of colour in gardens. She's a hero in the gardening world, everyone talks about her in slightly hushed tones.

What's the best piece of advice you've been given,and by whom?
When I was at an all-time low in my life, my dad said: "Kim, you've got to start pushing out on the world and stop letting it push in on you." I heeded his advice and it worked.

What's the strangest piece of fan mail you've ever received?
A big cow bell! I'm still trying to work out the reasoning behind it.

What's the least enjoyable job you've ever had?
Years ago I was on holiday in the Algarve with my family and found myself being photographed with a man dressed as a giant frog for a water-slide parkpromotion. I did think - what the hell am I doing?

How do you feel about your music being part of the current eighties revival?
It's making me smile. It's nice for people to celebrate something I put my heart and soul into. I may even do some gigs later in the year, but this time I'll be doing it for fun. 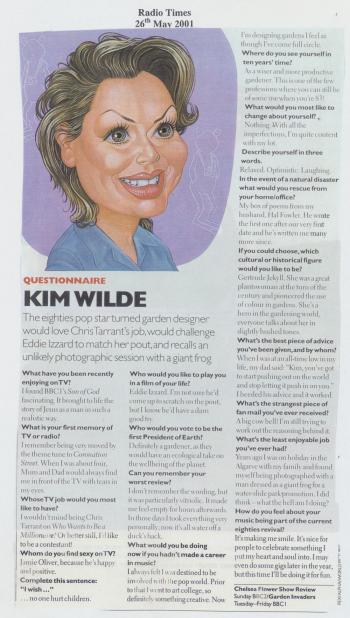