As a teenager, I hated the Eighties. The music appalled me, the fashion distressed me and I rebelled a tevery opportunity.

Now, 15 years later, I find myself in a very different position. Free from the troubles of teenage trauma, sulky moods and general stroppiness, I seem to have developed a passion for the past. No longer does Eighties music epitomise spots, school discos and the horrors of growing up - suddenly it represents the best days of my life .As Carol Decker skipped on stage, memories of my teenage years came flooding back. But it wasn't just me. At the bar, strangers openly discussed their favourite songs and illustrated them with nostalgic tales of their first snog, disastrous haircuts and woirst cider experience.

The trip down memory lane began with the orchestral glory of T'Pau's China in Your Hand and Heart And Soul. Over the top, extravagant and delicious, Decker warmed the crowd with her tongue-in-cheek antics. Nick Hayward, the former singer of quirky group Haircut 100, proved less memorable with his vague, melodic strummings.

The slightly self-conscious crowd were shaken and stirred by the mighty pop sounds of Go West. Still sporting the same tight T-shirts, the guys peaked with their hit We Close Our Eyes then soothed us with their Level 42-esque King Of Wishful Thinking.

Heaven 17 sounded oddly out of place among these Eighties' big guns. Considered progressive 15 years ago, the band have lasted the test of time and their biggest hit Temptation remains a dance-floor classic.

The biggest cheer of the night went to Ben from Curiosity Killed The Cat. Dressed in his trademark hat and exceptoinally baggy jeans, the former heart throb inspired girly screams and ridiculous bendy-knee dancing.

Mother-of-two Kim Wilde smouldered on stage as she sang Kids In America and You Keep Me Hanging On.

Paul Young proved a rather disappointing finale to a highly entertaining evening. Despite twirling his mic stand like a majorettes baton, he failed to ignite much excitement. 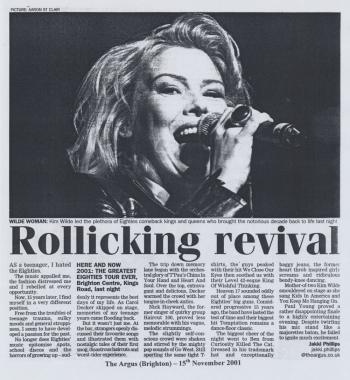