She may have relinquished her jet-set life as a rock star but, as Kim Wilde explains, her new role as a television gardener has proved just as hectic.

It must seem a far cry from the glamorous world of fast cars, luxury hotels and adoring fans, but for successful singer Kim Wilde, her reincarnation as a respected television gardener has proved to be more than just an astute career move.

Her latest role as design expert on BBC1's nwe series of Garden Invaders has given her the chance to stretch her gardening skills to the limit. Having swapped her glamorous stage clothes for jeans and wellington boots, we'll be seeing her get stuck into some decidedly unglamorous garden chores.

'The researchers seemd to always pick gardens in the worst possible state', she groans. 'There was a lot of hard, physical work like carting out rubble', she adds, 'and I've got the physiotherapist's bills to prove it.'

The series follows the enduringly popular garden makeover format, with the addition of an entertaining twist. The materials and plants available for the makeover are restricted to the prizes won by the contestants in the horticultural quiz section of the show. This presented some interesting challenges for Kim and her team. 'The prizes were things like gravel, sleepers, paving stones, paint and trellis', she explains, 'so it was quite hard to change the garden when the contestants hadn't won much. We just had to be ingenious and improvise with anything we could find. But it was great fun.'

Kim designed and worked on around 20 gardens for the series and, as filming took place over the summer and autumn, the rain inevitably made its presence felt. 'One day it was so wet we had to make the rain into a feature of the programme. I got completely drenched and wasn't in the best of moods by the time I got home.'

So how did life on the road with the Garden Invaders compare with her former life invading the music world? 'It was so good to get out and about after spending so much of my life in dressing rooms and hotels', she admits. 'I used to be so envious of my gardener when I came home, caked in make-up, to see him out in the garden, watching the sun go down. Now it's my turn.' 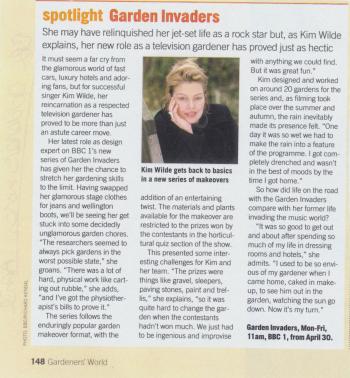