Step back in time

We've seen compilation albums, TV programmes, radio stations and club nights but, as Cathryn Scott discovers, the latest addition to the 80s revival beats them all hands down.

It was inevitable really, given the nation's obsession with the 1980s, that the compilation CDs and the television programmes wouldn't be enough. Sooner or later would come the ultimate trip down memory lane: a live performance showcasing some of the decade's biggest pop acts. And that's exactly what's happening later this month as T'Pau, Paul Young, Go West, Heaven 17, Kim Wilde, Curiosity killed the cat, and Nick Heyward descend on Cardiff as part of a UK tour.

'It's kind of sweet', says singing sensation Kim Wilde when I ask her how it feels to be performing live again with her contemporaries from the decade taste forgot. 'We all take the piss out of each other dreadfully. I'm the worst one really, I'm a bit irreverent, I don't know if they all take it in the manner with which it's meant! I think everyone finds it faintly amusing and there'd be a bit of a problem if they didn't.'

For those too young to remember Wilde became an overnight star back in 1981 when her first single Kids in America made it to number two in the UK charts. By 1983 she had been named best British female singer at the Brit Awards and supported Michael Jackson on a world tour. Her face was plastered on the bedroom walls of young boys across the nation, one such boy was Nick Heyward.

An 80s pop icon himself - Heyward adornde many a bedroom wall after his meteoric rise to fame as part of the band Haircut 100 and later as a solo artist - he admits finally meeting Wilde is one of the tour's highlights. 'I went shopping with Kim Wilde the other day, which was fabulous', he laugh. 'It took me 20 years to go shopping with Kim - I used to have a poster of her on my wall so it was a dream come true.'

Of course there's more to the tour than meeting one's idols. Heyward suggests one of the advantages of the tour is being able to play the music without having to deal with the presures that wereso prevalent at the time. 'Everyone's a bit more comfortable now than they were then', he says, and one person who will certainly appreciate not haing to deal with all the added strains of being the latest star is Ben Volpeliere-Pierrot from Curiosity Killed The Cat. He wa snot the best behaved of pop stars at the time and became a regular on the pages of the tabloids. 'I didn't really like that bit', he says thoughtfully when I ask him how he feels looking back. 'It's not really what I wanted. I didn't really want mass exposure and celebrityism.'

But why the current obsession with the 80s? It was hardly the coolest of decades - hair was big, shoulder pads were bigger and the country lurches between 'boom and bust'. Wilde puts the resurgence down to the music - 'the songs themselves have stood the test of time and people still enjoy listening to them' - but Volpeliere-Pierrot has his own theories: 'I think it's probably because there's a lull in fashion and music at the moment. Everything goes in cycles and the 70s has been pretty much dug up so they look to the next decade. At the time everyone is always so right in the heart of it that you can't get a good perspective.' He feels a revival gives people the chance to step back and ppreciate what really went on before figuring out where the next step will take them.

And there is an 'eductaional' value to the tour: 'I imagine that some of the audience will have teenage children', says Heyward, 'which is wonderful, they probably want to bring their kids along and say 'this is what I was brought up on, this is what I was listening to: the soundtrack of my youth.'

But isn't all this reminiscing a sign that we are reluctant to move on? 'I think it's natural for people to look back', argues Heyward. 'I think it's good to look back and embrace the past but don't get too stuck in it. It's like if you go up to your loft and shine your torch on your old photographs - you don't sit there for the rest of your life. You see that they're in the past but then you move on again. And that's what this is about, shining a torch into a loft.'

Are the acts involved enjoying this re-emergence into the music world? It seems it's only Wilde who's been away. Curiosity Killed The Cat and Heyward have been busy writing and recording nwe material. Heyward has two new albums - one of which is a collection of poetry - and both are available from the website he has recently launched.

Volpeliere-Pierrot says Curiosity Killed The Cat aren't sure when they will be releasing new material but he assures me that their music will fit in with today's charts in the same way they did in the 80s: that is, 'we really didn't fit in at all. We had quite a unique sound and we always strived not to sound like anyone else. If anything that was our aim, we just wanted to make an original sound.'

For Wilde the whole experience has been a bit strange 'because for the last five years I've been married, having babies (Harry now three and a half and Rose one and a half) and being very much a mum'. She says everything happened to spontaneously. After being asked to become involved in the tour, her record company EMI decided to put out a Best Of album - which is in the shops this week. 'I decided if they're going to cash in then I'll beat the lot of them. So I got involved in the album and we've given them a new track.'

Wilde's face has also become a familiar one in the world of gardening as a presenter of BBC's Garden Invaders. Much of this year has been taken up with filming and rehearsals and she says she will be quite contect when she can take a big step back and disappear for a while. I ask Wilde if she will be introducing her children to the joys of the 80s. She says that while Rose is probably too young to understand, Harry is still getting used to seeing his mother on the television and seeing the concerts would probably confuse him. 'He'd be terrified if he aw me striding on with my leather pants and my five inch heels. I might give him damaging dreams.' 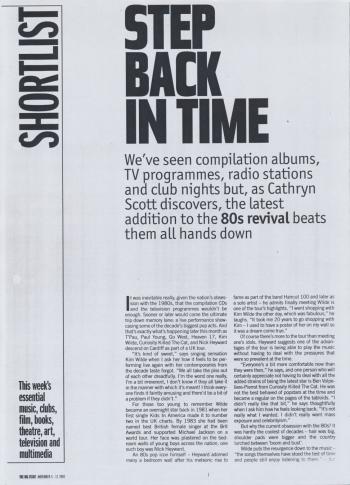 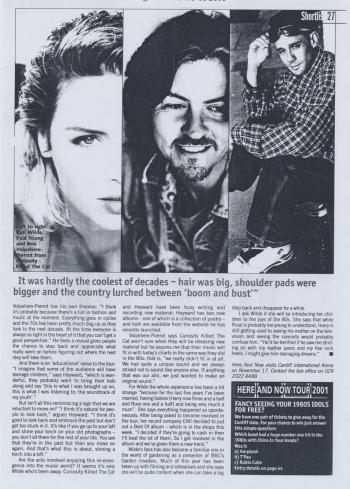