Eighties rock star, Kim Wilde, has swapped her recording career for something completely different - designing gardens for TV. Kim's having fun in her wellies, planting vegetables and shrubs, a stark contrast to her days performing all over the world with the likes of Michael Jackson.

"I've been incredibly lucky", Kim admitted. "I started a music career when I desperately wanted to do it at the age of 20, had loads of success, lots of fun, made a good amount of money and enjoyed that time." In the mid-90s, Kim went on to star in the smash-hit musical, Tommy, in London's West End. It was there she met actor Hal Fowler and they fell deeply in love. When he proposed, he hired a private plane and whisked her off to Calais for lunch. Soon afterwards, they were married, and now live in an idyllic, four-bedroom 16th-century converted barn, with a one acre garden, in Hertfordshire.

The couple have two children, Harry, aged three, and one-year-old Rose. "Hal's great in the garden", she said. "He's really supportive and helps out a lot, although he does seem to spend a lot of time watching what I'm doing and saying how wonderful it is! His favourite job is mowing the lawn, which he's welcome to - I hate mowing, it's so boring!"

"Hal is romantic. The first romantic thing he did for me was to write me a poem. and subsequently, he's written many poems. I have a box of them now. He doesn't give me flowers, he gives me poems. They last longer."

Kim's career as a TV gardener started when programme makers called at a Hertfordshire horticultural college in the hope of finding experts for Carol Vorderman's Better Gardens. Kim had studied there and the TV folk knew she was ideal. She appeared on screen while pregnant and sailed through the series. The BBC1 snapped her up for their Garden Invaders shows ,in which Kim designs 20 small gradens against the clock. In the series, Kim has to finish designing each garden in a day. "It mainly involves families who have moved into a new home and don't have a what to do with the garden", explained Kim, who was joined by a team of student horticulturists to help carry out the tasks.

"A couple of times, I had to have a quick rethink on the garden's design. The owners didn't see the garden until the end, so it was a risky business. As far as I know they all liked them - but I haven't seen all the finished programmes yet! It was incredibly hard work, with a lot of digging. I already had a weakness in my back, but lifting concrete, clay and rubble didn't help. But it's wonderful getting something done quickly. I particularly enjoyed the first one I designed. We went for a Mediterranean look, with geraniums and lavender, and it was lovely. And the cost was very affordable."

The move from music to mud and muck wasn't difficult for Kim, who's 40, but looks 10 years younger. She's a lady who's always had her feet firmly on the ground. "I've been interested in gardens for as long as I can remember", said Kim. "I was born in South-East London, but moved to Hertfordshire when I was eight. I started to notice gardens and parks more and more, and it just grew from there."

Kim burs tonto the music scene in 1981, with her first single, "Kids in America", which reached No. 2.

It was a real family affair for the then 21-year-old Kim, with brother Ricky writing and producing for her, along with dad, Marty, who had a string of Top 10 hits, including 'A Teenager In Love', 'Donna', 'Rubber Ball' and 'Sea Of Love', in the late 50s and early 60s. Her mum, Joyce, former vocalist and dancer with the Vernons Girls, was also involved looking after Kim's best interests.

Kim's younger sister, 21-year-old Roxanne (named after the Police song) has just started out in the music business and is in a group called Dimestars, who recently supported Kylie Minogue on tour.

Kim has no immediate plans to resume her pop career, but doesn't regret a single moment of it. "I had a whale of a time in my 20s", she said. She had eight Top 10 hits, and a No. 1 in America, with a cover of the old Supremes classic, 'You Keep Me Hangin' On', and Kim's most-treasured memory is of her time supporting Michael Jackson on his Bad tour.

But it's her home and garden that she sees as her near future. "I've just planted a woodland of 300 trees in a two-acre field adjacent to my garden", she said. "It's basically a lot of sticks at the moment but when it grows in three or four years, it'll be a real mix of birch, hazel, ash, the lot. It'll be given to the wildlife, rabbits, hedgehogs, a haven for little animals to go. Once it's grown, my children will be five and eight, so we'll be able to enjoy it."

And Kim hopes to extend her family as well as her garden. "I'm keen to have some more children, if my back will let me", she laughed. 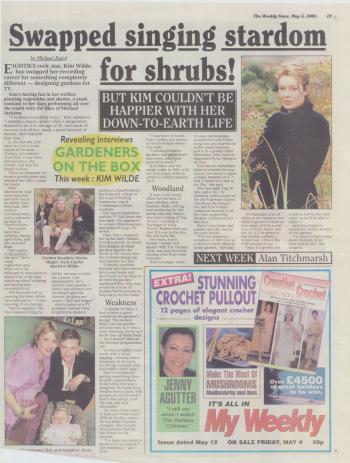