Visit Kim Wilde's converted 16th-century barn in a green tract of Hertfordshire and you feel as if you have entered a world in which the propaganda about celebrity happiness peddled by OK! and Hello! magazines have, through the workings of some pastoral ju-ju, all come true.

She seems preposterously content. She oogles and googles over her impossibly cute 14-month-old daughter Rose, and the glow of satisfied mumsiness doesn't wane even when a proffered blueberry muffin is chucked straight back at her head. Wilde, once that peroxided, pouting pop star whose biggest numbers ­ "Kids in America", "You Keep me Hangin' On" et al ­ formed the white-hot climax of my every school disco, has devoted herself to motherhood and horticulture, and is now visibly pleased to be standing around in her kitchen, her hair thick with muffin crumbs, talking about sharp sand, slugs, and television gardening programmes. "I was a bit starstruck when I met Alan Titchmarsh," confesses the woman who once toured the world with Michael Jackson. "I surprised myself. I became tongue-tied."

Fancy a tour around her beautiful home? It's an impressively cavernous space, hung with gothic candelabra of the sort that the Phantom of the Opera might swing from, with a long dining table and a trio of massive sofas huddled around the huge open fire. A gallery runs along the far wall, and beyond this are the bedrooms and an attic where her Eighties paraphernalia ­ costumes, stage jewellery, shoes ­ will lurk until the day her kids drag it all out to play dress-up. As for the garden, well, the fruit trees in her orchard are beginning to blossom; her rhubarb is begging to have Norris McWhirter's ruler clamped against it; her clematis hangs in great fingers from the woodwork of her pergola, her red oaks are coming into leaf. You get the picture. It looks well. All those Thursday nights spent studying for her City and Guilds Phase II course in Planting and Planting Design are obviously paying off.

Born in 1960, Kim Wilde is the progeny of Marty, the Brylcreemed sex god of the frothy coffee bars, and Joyce Baker, alumna of the 1960s song-and-dance troupe the Vernons Girls. When their daughter was eight years old, the Wildes moved from their semi in Greenwich, south-east London, to the Hertfordshire village of Tewin, where young Kim discovered her love of vegetable marrows and manure. At 19, she completed a one-year foundation course at St Albans College of Art and Design, but her plans to stay on for the degree course were interrupted when she was signed by RAK records, and her first single, "Kids in America", became a global hit.

"For whatever reason ­ I'd love to know why ­ I desperately and singlemindedly wanted to get into the pop world. That was my raison d'être ­ to be a pop performer, to make pop records. But I also really wanted to be in a position where I was very much in love with someone and to have their children. I grew up with the real-life love story of my parents, and I still think that the most wonderful thing in life is to find your soulmate and have children."

But, as the Eighties moved on, and her singing career began to go off the boil, a soulmate failed to materialise, and she grew increasingly dissatisfied with the direction in which her life was moving. "I was beginning to feel trapped inside the machine. I wondered if that was going to be the extent of my world, and I desperately wanted to get out. I didn't feel I was expressing myself in any new way. I'd become bored with it, bored with myself. So I decided it was time for a real change, and it had to be something more profound than a visit to [hairdressers] Toni & Guy."

Here's her happy ending: in 1995, she made her West End début in Tommy, and met a young actor named Hal Fowler. "As soon as I met Hal, I lost the will to sing, or write songs, or travel around the world. They were the things I'd focused on for years, and almost overnight they drifted away. It was such a relief not to go out and have to be Kim Wilde anymore. I'd found something greater to replace all that, something that would require all my energy."

They married the following year, and she became pregnant with their first child, Harry, the year after that. It was during her pregnancy that she enrolled for classes at the Capel Manor horticultural college. "I was having a nice semi-retirement, I was having a baby, and we had the garden. I was getting nice and fat. I could get really, really, fat, and no one could give me a hard time about it anymore. I was in heaven."

And then along came Carol Vorderman. A production team from Granada TV, it emerged, had learned of Wilde's horticultural interests, and offered her a job as garden designer on Vorderman's Better Gardens show. Wilde was wary of the gig: thanks to Cheryl Baker and Toyah Wilcox, daytime TV has become a form of sheltered accommodation for former Eighties pop starlets, and, moreover, she didn't feel qualified to be offering advice on a subject with which she was only just getting to grips herself. The work, however, gave her the perfect opportunity to learn on the job and to seek advice from venerable old gardeners in her village ­ though some of their recommendations, involving country remedies such as the liberal application of paraffin and Jeyes Fluid, she chose to decline.

Now, she asserts, with her arms bearing tiny scratches from some of her thornier charges, she's having much more fun than she ever had while she was a pop star. "I had a better time at the Gardening Writer's Guild than any music awards ceremony I've ever been to. Christopher Lloyd was there, the eminent plantsman. People cheered as he got up to speak: it was like Puff Daddy was walking up there."

Her own gardening show, Garden Invaders, is now running on BBC 1, and she will be part of the BBC's commentary team for next week's Chelsea Flower Show. "I'll be going to Chelsea with the creme de la creme of gardening personalities," she enthuses, her eyes ablaze with horticultural fervour. "I'm sharing the cover of the Radio Times with Alan Titchmarsh and Charlie Dimmock! Alan Titchmarsh! These are people who I've watched on the TV and I never, ever thought I'd be amongst them!"

So comfortable does she feel with this new turn in her career that she's even considering taking part in an Eighties-themed music tour at the end of this year: "It appeals to my sense of the absurd. I did spend years being rather predictable ­ you always knew you were going to get blonde hair, you always knew I was going to pout a lot and you always knew you were going to get a pop song. But now I think I can just enjoy it. There was a lot of feeling in the Eighties about what was cool and what wasn't cool. People had such a problem with the word pop, it was almost a dirty word. The buying public weren't concerned with those aspects of it, but pretty much everybody in the industry was preoccupied with credibility ­ people like [the journalist] Paul Morley. It was all a bit of a pain, really."

Twenty years later, Morley's NME article, an interview that clearly upset her at the time, seems hilariously incoherent: "Kim Wilde is a vague gloss over pop's standard strictness, the purist equivalent of McLaren's naked attempts to personify the dormant desires in pop, to symbolise the beauty and banality of pop. Kim Wilde is such an obvious display! On a low level, her act is so accountable to rock'n'roll's grand guesses, so rascally traditional, God knows why I like it (perhaps)."

These days, the slugs perform a comparable role in her life. "They know when you've just planted a vulnerable little seedling in some nice fresh compost. They call other slugs from miles around." And her remedy? "Beer traps are too hit and miss, and I'd never use slug pellets. I'm a bit of a night torch girl. I've been in the greenhouse every night, pulling them off. I come out and I fling 'em far and wide." In the old days, I suppose, she just had to let them crawl all over her.

Kim Wilde currently appears on BBC1's 'Garden Invaders' and is co-presenting some of the BBC's daytime coverage of the Chelsea Flower Show, commencing Monday 21st May. 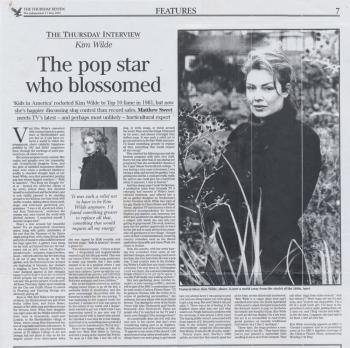