What is Kim Wilde doing now?

With her first song "Kids in America" the british singer had a huge hit, that sold six million times.

Are you standing before the camera with gardening scissors in your hands again?
Right now there's a pause. My first season went on air until last year. Then I made a new series for the BBC - "Garden Invaders". We go into strangers' gardens and redesign them in one day.

Is that possible?
I see a video of the garden and an interview first, so as to know what the owners want or don't want. Then I go with a team of seven workers and work all day. It's possible to do a lot.

It's a big step from music to gardening. How did it go?
I was raised in the country. Already as a child I was totally in love with nature. My career tore me away from that. I missed going into fresh air, out in the open. I did look out of a lot of windows and wished I was out there.

So do you miss the big city now?
Actually, no. I have such a fulfilled life. And working in the garden is so stimulating. Creative therapy.

Isn't it also a very lonely type of work - only you and the flowers?
Totally not. I have so much to do with other people. That's what I like about it: it all revolves around people. Gardeners, builders, hundreds of people. It's a very social thing.

Can people call you and ask you to design their garden for you?
Momentarily I do no private commissions. I am busy with TV-work. And college, where I'm following an evening course in landscape design. And my children. I want to take it easy.

Do you sing while you work in the garden?
Often I do, just a bit, but mostly I'm too busy. Gardening can be very intensive.

Do you have favourite flowers?
Lavender - because of their colour and smell. It has such a mediterranean feel.

How is your contact with the music scene?
I have pulled out of it. Although not entirely: my brother Ricky is producer, and my sister Roxanne has just started with her own band Dimestars.

And what music do you like to hear?
I listen to the radio a lot. Many chart hits. I like the Spice Girls a lot.

Do you believe, that the 80's, in which you were successful, are getting hip again?
I believe they are already. Disco Music.

But the fashion hasn't returned.
Oh no, and I hope they will not come back in style!

How do you recall those years?
It was great, being young and a pop star. I have travelled around the world. I enjoyed Germany a lot, especially that one show with the naked women - Musikladen.

Have you learned any lessons from your time as a pop star?
You must recognise success and failure. The success of the one is the failure of the other and vice versa. One must do what one can do best, and find a balance.

And you have found it with the plants?
In family, with friends and in the garden. And my biggest passion are my children. 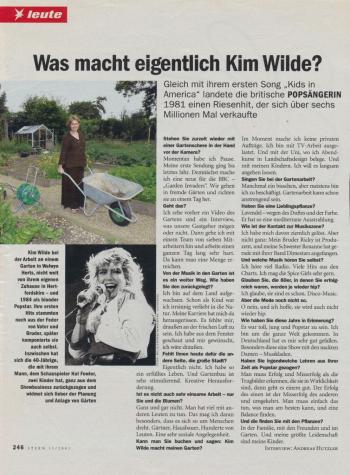