In the 80s Kim Wilde was the undisputed princess of pop notching up a string of hits to win the accolade of the most charted British female vocalist of the decade.
She seemed to have it all - the blonde-haired pop kitten who every man wanted to date and every girl wanted to be.
Although the majority of her songs were original compositions, often penned with brother Ricky, she scored her biggest hit with a remake of the Supremes 1966 hit You Keep Me Hangin' On. Wilde's version, released 20 years later, went to number two in the UK and hit the top spot in the States.

But towards the end of the decade her star began to fade and by the early 90s it all seemed to be over. In 1996 she landed a part in the West End musical Tommy which was to prove something of a catalyst for her in more ways than one.

The blonde hair has gone and the woman before me has a much fuller figure than the Wilde of yesteryear. But the pout is still very much in place, although she is happier to admit she is older and wiser than she was when she first burst on to the pop scene.

"I'm still really proud of my musical career. I was very young - the perfect time to be a pop star," recalls the woman, who is now sewing the seeds of a career in horticulture fronting Garden Invaders. "I'd always wanted to sing and be a pop star. I was given a gift of a song with my first hit Kids In America. Then everybody seemed to like my hair and bizarrely it went from there. I'd got the song, the hair and then the career."

"After a few years I decided to start writing my songs. I listened to the radio and thought that I could write songs like they were playing. One of the writers who inspired me was Kirsty MacColl. She was only a year older and I remember them playing They Don't Know on the radio. I thought if Kirsty can do it I can do it."

"I met her when we were both dating blokes in the same band. She was an angel. I thought she was a really gutsy girl to tackle such a male-dominated industry. Then the 80s became filled with female songwriters. Although I wasn't one of the eminent ones I was there," says the daughter of 60s pop star Marty Wilde.

"When You Keep Me Hangin' On went to number one in the States my brother Ricky and me just went out there and had a hoot. We were driven round in a stretch limo and given the complete works - we just laughed our way around America. I still love music. It's not like I walked away from my career with disgust and contempt. I walked away because there was something better on offer," says the 40-year-old.

"By the early 90s, I had had enough of being a pop star and I think the public had had enough of me. It was a two way thing. I could see and feel what was happening and remember thinking that I was fed up too," she laughs. "My album Now And Forever didn't do very well and I wasn't that happy about people not buying it."

"The timing was just right. The end of a perfect love affair. I still think I wouldn't mind doing some more music at some point."

But as her love affair with music began to falter, Wilde discovered a new love - actor Hal Fowler, whom she met while appearing in Tommy. The couple enjoyed a whirlwind romance and were married in September 1996. They now have two children Harry, three, and one-year-old Rose.

"I had kind of given up on the idea that I would ever meet a man who would be a soul mate," reveals Wilde. "The last thing I expected was to go into a West End musical and meet the man who was going to become my husband and the father of my children. It all happened so quickly. I've always believed that it could happen like that because that was the way it happened for my own parents. I was bought up on that fairy tale. After we got married I had this feeling that we would have a family rather quickly - because I was dying to have kids with Hal."

Wilde developed her interest in gardening when they bought their current home and it just blossomed from there. Wilde is still at college studying for a City and Guilds qualification in planting and planting design. 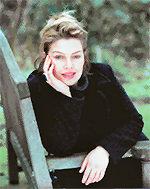