Wilde about the 80s

In their heyday they were amongst the biggest names in British pop and yesterday they announced they were going back on the road for a nostalgic series of concerts billed as "the greatest Eighties tour ever".
Paul Young, T'Pau, Go West and Kim Wilde are just some of the chart-toppers who will perform at the UK's biggest stadiums at the end of the year.

Despite the fact some of the male stars have noticeably less hair and sport fuller figures than in their backcombed glory days, at yesterday's launch they all professed huge enthusiasm for the venture, not least the prospect of playing to stadiums again after so many years in the pop wilderness. "When we met up it was a really nice vibe. I think it's going to be a ball." said Richard Drummie from Go West.

Each act will play at least two of their best-known hits at venues such as Wembley Arena and Birmingham NEC. Fans can expect to see Paul Young singing "Wherever I Lay My Hat", T'Pau play "China In Your Hands" and Kim Wilde belting out "Kids In America".

Heaven 17's lead singer Glenn Gregory, who scored a massive number one with "Temptation", said: "Heaven 17 are extremely excited about touring the UK again. With this Eighties revival at the moment we will draw both a new crowd and those who were with us the first time round."

Eighties veterans Duran Duran, who are still performing but not taking part in this tour, have enjoyed a warm reception from critics for their recent efforts but have never quite recaptured their past success.

Most of the musicians on the tour remained in the business once their public profile dipped. After Kim Wilde turned her back on pop she appeared in the West End musical Tommy. She and husband Hal Fowler have two children and Kim now appears on the BBC's Garden Invaders.
"I'm really looking forward to the tour. It's going to be one big party," she said yesterday.

Paul Young is now 45 and lives in North London. After his record deal was terminated he spent the early Nineties singing in hotels in the Caribbean in exchange for board for him and his family. He finished a UK tour earlier this month and is working on an album with Tex-Mex band Los Pacaminos.

Go West never entirely threw in the towel, and have been gigging on and off since their chart topping days. And Carol Decker, singer of T'Pau, still works with guitarist Ronnie Rogers and has branched into acting.

"We've reached a point where a generation is old enough to look back on the music it grew up with without embarrassment," says John McKie, editor of music magazine Q. "You can see it with all the nostalgia programmes and films like "The Wedding Singer" which was aimed at thirtysomethings and featured hit after hit from their teenage years. And most of the music isn't actually as awful as you feared it might be." 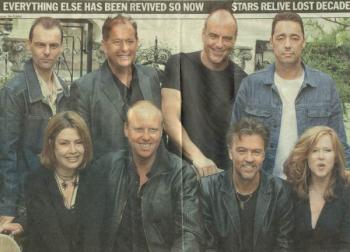 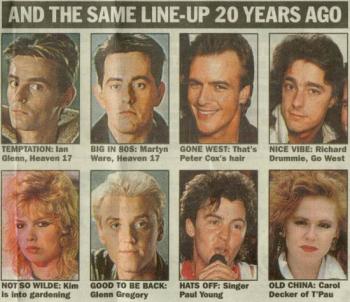