In the 80s Kim Wilde was the undisputed princess of pop, notching up a string of hits to win the accolade of the most charted British Female vocalist of the decade.

She seemed to have it all - the blonde-haired pop kitten who every man wanted to date and every girl wanted to be. Although the majority of her songs were original compositions, often penned with brother Ricky, she scored her biggest hit with a remake of the Supremes 1966 hit You Keep Me Hangin' On. Wilde's version, released 20 years later, went to number two in the UK and hit the top spot in the States.

But towards the end of the decade her stad began to fade, and by the early 90s it all seemed to be over. In 1996 she landed a part in the West End musical Tommy which was to prove something of a catalyst for her in more ways than one.

"I'm still really proud of my musical career. I was very young - the perfect time to be a pop star", recalls the woman, who is now sowing the seeds of a career in horticulture fronting BBC1's Garden Invaders.

"I was given a gift of a song with my first hit Kids in America. Then everybody seemed to like my hair and bizarrely it went from there. I'd got the song, the hair and then the career. After a few years I decided to start writing my songs. I listened to the radio and thought that I could write songs like they were playing. When You Keep Me Hangin' On went to No. 1 in the States my brother Ricky and me just went out there and had a hoot. We were driven round in a stretch limo and given the complete works - we just laughed our way around America. We only went there a couple of times. Maybe that is why my career never marched on over there.", she reflects.

"I still love music. It's not like I walked away from my career with disgust and contempt. I walked away because there was something better on offer", says the 40-year-old. "By the early 90s, I had had enough of being a pop star and I think the public had had enough of me. It was a two way thing. I could see and feel what was happening and remember thinking that I was fed up too", she laughs. "My album Now And Forever didn't do very well and I wasn't that happy about people not buying it. The timing was just right. The end of a perfect love affair. I still think I wouldn't mind doing some more music at some point."

But as her love affair with music began to falter, Wilde discovered a new love - actor Hal Fowler, whom she met while appearing in Tommy. The couple enjoyed a whirlwind romance and were married in September 1996. They now have two children: Harry, three, and one-year-old Rose.

"The last thing I expected was to go into a West End musical and meet the man who was going to become my husband and the father of my children. It all happened so quickly. I've always believed that it could happen like that because that was the way it happened with my own parents. I was brought up on that fairy tale."

Wilde developed her interest in gardening when they bought their current home and it just blossomed from there. Wilde is still at college studying for a City and Guilds qualification in Planting and Planting Design.

"I find it much easier to learn now than when I was at school", she says. "I do a lot of studying in the evening when the children are in bed. Initially some of the other students didn't recognise me. Then everybody seemed to know. I'm just plain Kim Smith to them, and they are not interested in who I am", she laughs.

Although Wilde has turned her back on pop music, the family connection is going strong with brother Ricky still writing and younger sister Roxanne, 21, just starting out as the lead singer of the band Dimestars.

They have already supported Kylie Minogue on her tour and have a new single, My Superstar, which has been tipped to do well in the charts.

So has she passed on any advice to her fledging pop star sister? "My dad's attitude was that it was always a job and you are damn lucky to do it", she says. "So he engendered a humble approach to it, which I just remind Roxanne of from time to time - but she is very down to earth anyway. We just let her get on with it - it's the best way." 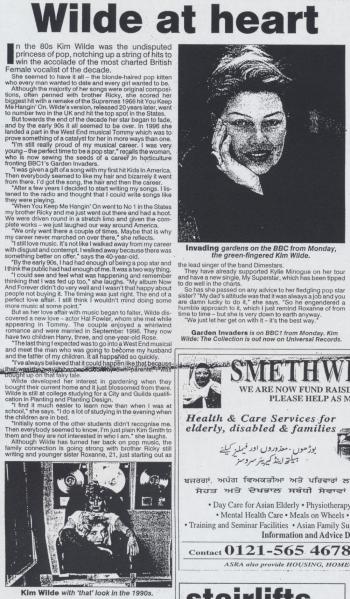