Pop star turned garden designer Kim Wilde has left the media spotlight to tend to her young family, rustic home and classic English garden... or has she?

It's a perennial problem for people who shoot to fame at a young age - what do you do in later life? How do you top such success - attempt to better it or try something completely different? For Eighties' pop star Kim Wilde the answer was to take a break from the celebrity lifestyle, retire to the country, get married, have children and then embark on a new career in gardening that has propelled her back into the public eye.
Five years ago, Kim married actor/singer Hal Fowler after they starred together in the West End musical Tommy. Five years before that, she'd bought a run-down 12th-century barn set in acres of rolling countryside. This became the couple's home and later that of their children - three-year-old Harry alld baby Rose.
'I started renovating the barn and because I wanted to clothe the walls in climbers, I became fascinated by the choice of plants available. I then decided to create a garden in the paddock behind the house, which inspired me to learn more about plants alld garden design,' Kim says. Kim was so bitten by the gardening bug that she enrolled on a foundation course in horticuIture at Capel Manor College in Middlesex when she was expecting Harry. Shortly after he was born, researchers from the BBC visited Capel Mallor alld, on learning Kim was a former student, asked her to deSign gardens on television. 'It allowed me to spend time with Harry and also to indulge my love of gardening, so the timing couldn't have been more perfect.'
Kim is now part of the Garden lnvaders team, who have just one day to transform a garden. 'It's amazing how much can be achieved in a day. you can really improve someone's quality oflife in that time. A lick of paint or a judiciously placed pot of pelargoniums can make such a difference.'
Often, of course, it's just a case of helping people see what's under their nose in a new way, as Kim explains. 'For instance, we have a table on our patio that I designed years ago and commissioned a friend to make, but it was far too big for indoors. Now I've given it and the chairs a coat of lavender blue paint and they have a new lease of life out there in the garden.'
Kim and Hal enjoy entertaining, so they decided the garden should provide them and their guests with fresh, organic food. 'When you've got friends round for a meal, there's nothing nicer than cooking and eating vegetables that have gone straight from the soil into the pan,' she says. 'I also felt growing our own produce was very important when we had children. One of the first things I did here was to build raised beds and plant out a variety of fruit and vegetables.'
Having tasted success, Kim then planted a herb garden that would meet all their culinary needs. Flanked by two frothy pink rose bushes and framed by an arch of golden hop, this area is a charming mix of the practical and the decorative.
The rest of the garden is designed in much the same way. Kim believes it's important to impose some kind of strcuture on plants, before allowing them to take on a life of their own. A formal avenue runs down the centre of the garden but a profusion of plants, including roses, catmint and perennia1 geraniums, tumbles onto it with informa1 abandon. 'I've kept the colour pa1ette restricted to purples, pinks and blues here,' she says. "Although there's a definite structure, the plants have their own way to a certain extent. I find the element of free wil1 in a garden to be fantastica1lyexciting. It's as if the garden says, "Well you can do this but don't expect me to behave myself".'
Kim has successfully managed to combine Elizabethan formality with cottage-garden vitality. 'I'm a big lavender fan. The scent a1one makes the plant specia1, but it's a1so said to produce a calm atmosphere and help reduce stress. It looks absolutely right in an old-fashioned English country garden 1ike mine.'
There are more old favourites at the front of the house. Despite being planted in a sea of rubble and gravel, a magnificent display ofhollyhocks stands guard over the entrance. 'I remember going to visit a friend and picking up the dead seed heads of the hollyhocks growing a1ong her road,' says Kim. 'I put them in my pocket and then into an envelope, which stayed on the kitchen she1f until I discovered them again some years later. I threw them into a pot of compost and, to my surprise, they shot up, as if they were desperate to 1ive. Now they've completely colonised a difficult area of the garden, producing colours that are simply spectacular.'
In another chal1enging corner, Kim has created a soothing water feature. Two glorious white Hydrangea quercifo/ia tlank a stone trough into which water trick1es from above. This is a quiet, contemplative area where Kim and Ha1 1ike to disp1ay the pots and plants given to them as wedding presents. Equal1y persona1 is the quirky wooden sculpture that sits on the lawn. This was hewn from a tree by an artist who's a friend of theirs.
'I can't wait to see the children discover, as I have, the infinitely fascinating and pleasurable aspects of gardening,' Kim says. 'Both the children and the garden are young so I'm real1y looking forward to seeing them al1 grow up together.'

The next series of Garden Invaders will be on BBCl in the autumn. 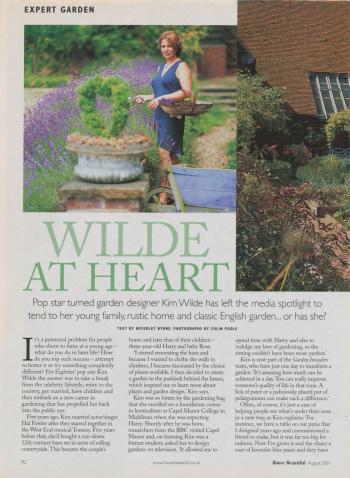 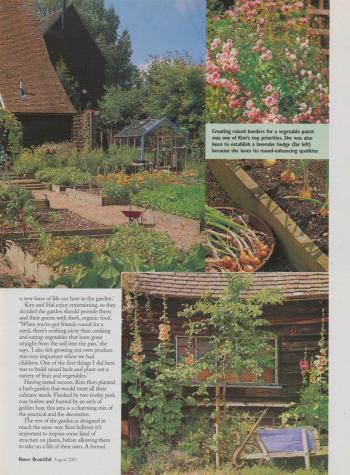 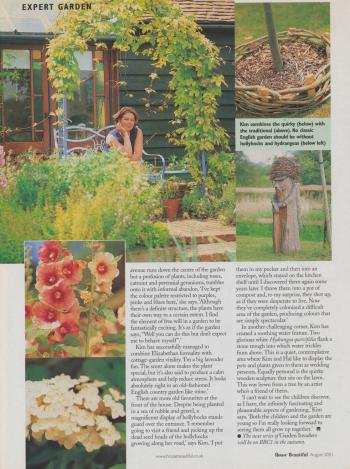