Claire Murphy talks to Kim Wilde about her transition from pop stardom to pruning.

'We're the kids in America... everybody live for the music-go-round.' That was Kim Wilde in 1981. But 20 years on, the 80s pop princess has grown up and transformed herself into the most unlikely of things - a gardener.

'It does make me giggle that I've become pop's Percy Thrower!', she laughs. As the TV garden phenomenon shows no sign of slowing down, Kim is the latest in a long line of celebrities to jump on the bandwagon. However, sh's quick to make it clear that gardening came first and the TV connection happened by accident. 'I enrolled on a summer course at Capel Manor, London's specialist college of horticultural and countryside studies', Kim explains. 'ITV's Better Gardens team was researching there and the tutors told them that I was full of beans about gardening, so they asked me if I wanted to take part in one of their programmes. And the rest, as they say, is history.'

'I'm not very attracted to TV in itself but I'm very, very interested in gardening - and television and gardening seem to make quite a good union these days.'

Kim is sitting in a meadow at her Hertfordshire home, just one part of her garden she has lovingly turned 'from nothing into a garden wonderland' for her children, Harry and Rose. She talks passionately about both - 'ultimately Harry and Rose are my greatest inspiration'- although she hastens to add that her offspring are, more often than not, a hindrance rather than a help in gardening matters.

'Harry gets interested when he's got something to put in his gob, and Rose goes around taking the heads off my tulips that I've waited for a whole year to come up!'

Once Kim starts talking about gardening she positively beams with enthusiasm, drifting off into her own horticultural wonderland. 'I can't think of any other subject that was more in need of resurrection. Now it has a dynamism that it sadly lacked, and I'm really excited that I'm part of that energy.'

So will the girl who had the pop world at her feet be content with life in a slower lane? 'I like the way my career never overtook me. I'm glad it afforded me opportunities to have a normal life too. I've been able to have the best of both worlds really.' And she doesn't tire of being known as Kim Wilde, singer. 'That whole period of my life was great when it was happening, and I still enjoy that aspect of my career from a distance.' And fans of Ms Wilde's music may be in for a treat: 'There's every chance I may be involved in some kind of 80s tour.'

For a split second she's transported back to her days in the limelight, and then Kim Wilde, mother and professional gardener continues in all her wistful glory: 'You can't really compete with nature and that's what I love about it. I love the fact that no matter how much you interfere with it, ultimately the mainstays of gardening are the plants themselves - not designers and not pople like me or Alan Titchmarsh or Charlie Dimmock. The plants will speak for themselves just by being so utterly beautiful.'

She may have exchanged her glittery gloves for a pair of thick rubber ones, but Kim may just have planted herself into a nice little plot indeed. 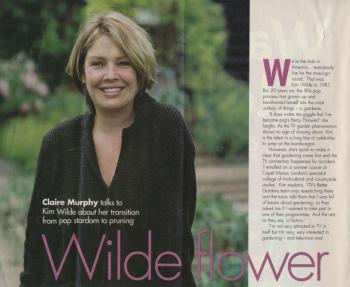 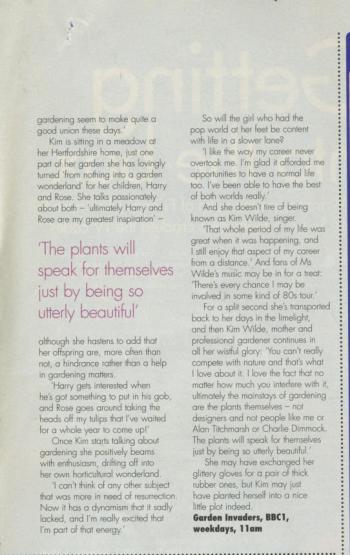