Eighties pop babe Kim Wilde may have found it easier to put on a pair of gardening gloves than leather trousers recently, but she's going to be wearing them come what may tomorrow night, she tells David Dunn.

One thing the woman who brought us tales of the kids in America won't be doing on stage up Attercliffe way is risking 'an incident'. Determined to throw on some of the clobber which accompanied the height of her chart fame, Ms Wilde has been trying on the trousers which once made Top Of The Pops compelling viewing.

'The ones I wore I got just above the kness last night. I just managed to pull them over my bum. But I couldn't do the zip up', she confessed to Oi! 'Next week I'm doing this don't eat very much diet, if that doesn't work I'll just go out and buy a bigger pair. I don't want the zip to bust on stage. It happened once in Australia. The jeans had to be laced up and I'd not been diligent enough and they burst. the boys were happy about it.'

Now they'll be happy just to see the singer - more recently associated with gardening shows - back behind a microphone. They get their wish when Kim joins fellow former chart dwellers Paul Young, Curiosity Killed the Cat, Nick Heyward, T'Pau, Go West and Sheffield's own Heaven 17 for the Here & Now Tour, which rolls into Sheffield Arena tomorrow.

Not that Kim, now a mother of two, really expected to be playing some of the biggest shows of her career aged 40. She'd released a new greatest hits collection and has been enjoying a burgeoning TV career.

'At the time I thought it, the record, was like closing a book. Taking a step back, pop was not exactly calling me back with any great enthusiasm and I didn't want it very much. Then the promoter got in touch with me and asked if I was interested and I got aboard the '80s rollercoaster. He had done a few and they'd done really well. They had approached me before but it was at a time I was pregnant having babies and the whole bit and not really fit. I thought it would be a really good thing to aim for. Good to get me in shape again because after the babies came my baby pounds. It was good motivation to make a few quid. So I have been keeping fit, going running and getting myself limberd up for it.'

Some Kim Wilde fans were no doubt surprised to see the woman who belted out You Keep Me Hangin' On and Another Step (Closer To You), You Came elbow deep to mulch on Carol Vorderman's Better Gardens. Having acquired a City and Guilds in plants and design at agricultural college, she was spotted by ITV researchers. Next year she'll be on the Beeb in Garden Invaders.

'I was interested in gardening, designed our garden with my husband and for the studio in Knebworth. I'd done some for friends, I was inspired. When I got offered to do it on TV, I thought 'wow', it is a great opportunity to learn and get out of the pop world. But things tend to bite me on the bum a lot. I'll do this tour and go back and order my feed consignment for next year.'

The other major distraction has been mothering her kids three-year-old Harry and Rose (two and a half). 'I always thought about how it could be to be a mum and how it would be best for me. I knew a pop career and being a mum would be incompatble. I also knew if I gave it up and did not replace it with anything as interesting or challenging I would become not only a person completely bored with myself but my family would become bored with me.  So the gardening started as a hobby. Then I realised the potential. I could make it into something much more without taking me away too much. It would keep me interested. It is creative. My pop career had lots of potential for creativity. Things like songwriting and to a certain degree performing and singing. I had already made a decision I did not want to pursue a pop career in the same way Tina Turner or Lulu to make it the central focus of my life. I'm very pleased gardening provided a career. It is more satisfying in many ways than a pop career because I can continue learning until I peg it and I join the daisies I love so much.'

All that said, when prompted Kim will admit to a bit of a rebel streak still. She says she always doubted she'd be singing 'Kids in America' at 40, but... 'I've never been fond of doing things people think I should do. For years I was quite a predictable pop star, pouting and blonde hair. It is nice to be in my 40s and be thoroughly unpredictable. Just as people think they have me sussed I change their perception, not to be deliberately difficult, it's just fun to be in a position when I can be.  I am sure there are some people would say I should keep my wellies on and hands in dirt and bring my kids up. But I'm going to pull on my leather pants and I'm going to celebrate my past.'

As for the kids in Hertfordshire, where she lives. 'harry knows I made records because I have been playing the Kids in America remix. The kids caught on to it and decided it would be good to jump up and down to. No I have to put it on for that mad hour they have after their tea and before they go to bed. It's very embarrassing. The neighbours must think 'poor girl, she's los tin the '80s playing all her old records.' 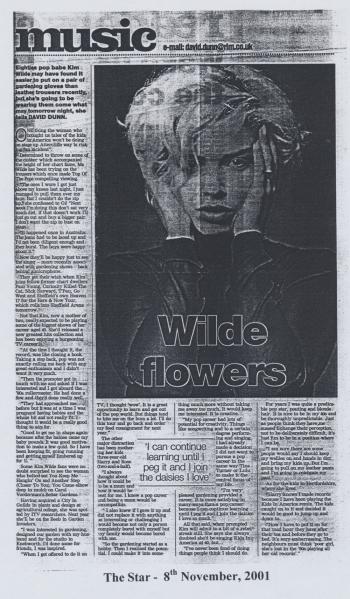