With her sexy image and striking eyes, gorgeous pop babe Roxanne wilde could soon be tasting chart success. But if things don't go according to plan, singer Roxanne can ask for a few tips from her sister - Eighties pop chick Kim Wilde, who notched up eight UK Top Ten hits.

Roxanne is about to launch her own assault on the charts with feisty group Dimestars. The four-piece release their new single, My Superstar, in May and their album, Weekend, is out in June.

But Roxanne, who at 21 is 19 years younger than her famous sister, is keen to try to crack the UK scene WITHOUT the help of Kim. She has also turned down the help of her rock 'n' roll star dad, Marty, who had six Top Ten hits in the 50s and 60s.

A source close to Roxanne said: "She wants to do it in her own way. Kim's mum was involved in her management during her heyday. The offer of help is there but she has turned it down. She wants to do it herself. The band are good enough to taste success on the back of their own hard work."

Even though she doesn't want to be tagged as Kim Wilde's sister, she still decided to stick with the same surname. 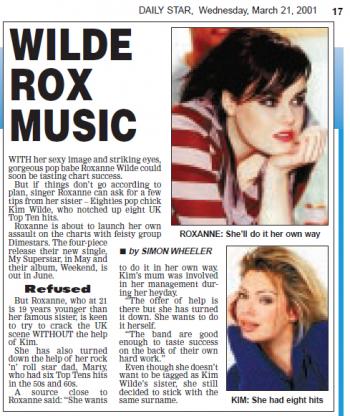