Date
December 22, 2002
Published in
The Independent on Sunday (UK)
Written by
Simon Price

"I saw the video five times before I even noticed there was a song." That's what a friend told me when I asked him what he thought of that Shakira single. And Shakira Isabel Mebarak Ripoli is many things - bilingual, Gabriel Garcia Marquez-endorsed singer, and (as we discover tonight) guitarist, mouth organist, drummer - but one thing she ain't is stupid. She knows what her asset is, and she shakes it like there's no tomorrow.

Emerging from the hood of a giant steel cobra wearing leather trousers and frankly little else, gliding magically forward through ankle-deep dry ice, it takes all of 20 seconds for Shakira to start belly-dancing, and she barely stops all night.

Weirdly, the women scream even more than the men do.

Looking around the packed Arena, half-filled with her countryfolk waving yellow/red/blue tricolours, you can suddenly understand the lack of self-esteem which prompted that line about her breasts not being like mountains: Colombian women are surely the most beautiful on earth, and next to most of them, Shakira's a right old minger.

Shakira is the biggest thing to come out of Colombia since Carlos Valderrama's hair, and I'm starting to see why. It isn't only the gyrations - although they inevitably plant images in one's mind - but the way she blends Colombian folk and Arabian traditional music (she's part-Lebanese) with Anglo-American rock.

Her horrible Anastacia/Vonda Shepard growl is off-putting, but her music, like her appearance, is a fine advertisement for miscegenation. The best part of the show, though, comes when she homes in on one genre with a truly bizarre heavy rock section, comprising Aerosmith's "Dudek's Like A Lady" (as it shall henceforth be known in honour of Liverpool's butterfingered goalkeeper) and AC/DC's "Back In Black", which she prefaces with a cocktail jazz intro.

The Tour Of The Mongoose - it's about how the rat-like carnivore is able to defeat a snake, and "if there's an animal on earth that can do that, maybe there's a responsibility for us to bite the neck of hatred" - is one of the loopiest shows from a mainstream artist since the heyday of Kate Bush (a useful comparison, in fact), the girl with the four-way hips keeping us interested with everything from modern dance to rubber Saddam Hussein masks, ludicrously excessive confetti cannons, and heartstopping pyros which, with the festive season upon us and a war in the offing, are a bit too bloody loud, thank you very much. I think I've seen it all, until she rises up through the stage with a lit candelabra on her head. Short of pencils up the nostrils, it's hard to see where Shakira can go next.

In my teens, I used to sell seafood at Barry Island Butlin's during the summer hols. Every year, they'd host a Festival Of The Sixties, and I would sneer with poorly-disguised contempt at the sad bastards from the Midlands and the Valleys who would flock to see portly, toupeed also-rans (Russ Conway, Gerry Marsden, Kathy Kirby and the like) and spend their year's wages in the Elvis shop in the arcade. Kill me if I ever turn out like that, I thought to myself.

Well, kill me now, because this is my third Here & Now Tour, I'm the sad bastard, and if there was a Visage concession stall at Wembley, I'd have blown my annual income on it.

Steve Strange is the man who, if you believe his (hugely entertaining) autobiography Blitzed!, introduced punk rock to Wales and then invented the London club scene. He also, of course, found time to front the wonderful high fashion/electropop project Visage, and that's why he's treading the boards at the sober and ungodly hour of half seven, flanked by a pair of muscle Marys and dressed like a camp sailor from the future. "Night Train" and "Pleasure Boys" are all very well, but the one everyone wants to hear is "Fade To Grey". Pop songs tend not to have verses which start "un homme dans une gare isolee..." nowadays, and pop songs are the poorer for it.

Getting an all-girl septet like The Belle Stars back together is hard, which is why the Here And Now Tour is a conveyor-belt affair mainly consisting of lead singers rattling through their hits backed by the house band. Tonight, The Belle Stars are Jenny McKeown and (I think) Stella Barker, but sadly not pouting saxophonist Miranda Joyce, subject of many a teenage Rude Boy crush.

It's 14 years since Dollar last performed together. The Cassidy-faced David Van Day and the saccharine Thereze Bazaar always had an image as an airbrushed golden couple, pop's Pammy and Bobby Ewing, and there's something compellingly watchable about their cheesy cabaret moves. Their one stone cold classic, the Trevor Horn-produced "Hand Held In Black And White", is tossed away in a medley, but we do get their cover of "I Wanna Hold Your Hand" which I actually considered superior to the Beatles version, and (I am not joking) still do: so cold and modern it borders on the avant-garde. For David, it's back to the hot dog stand. For us, it's Altered Images.

Or, I should say, Clare Grogan. I had been wondering how the house band would manage to recreate Johnny McElhone's guitar sound, but it turns out to be remarkably easy: "Early Eighties Postcard Indiepop" is just another setting on the effects pedal. Grogan gets the first properly ecstatic reception of the night by leaping out of a giant cake for (geddit?) "Happy Birthday". The elfin Grogan, who still looks fantastic, was always as well-loved for her acting as her singing: lying on her back counting the stars in Gregory's Girl, or flouncing around a cemetery in a negligee for a semi-pornographic photostory in the late lamented Flexipop magazine. But she did make some cracking singles, the best among them "Don't Talk To Me About Love", Altered Images' sublime echo of Blondie's "Heart Of Glass".

The incomplete nature of some of the acts reaches ridiculous levels with Five Star, who are now effectively Three Star. Still, "System Addict" rocks, and it takes days to get the line "boxes that go beep" out of my head.

Television's green-fingered garden goddess Kim Wilde is an old hand at these tours now: once a year she goes blonde and gets into the leathers. "Do you wanna have a singy with Kimmy?" she asks after the ersatz new wave classic "Chequered Love", but she already knows the answer: "Kids In America" prompts an arena-wide outbreak of "woah-ohs".

The Human League, as headliners, are allowed the privilege of using their own band, and - a stroke of genius - their own stage set. Everything is entirely white and lit with a UV glow: even the dirty old monitor wedges are coated in gleaming dust covers.

Having reviewed them once this year, I don't need to tell you how magnificent the League (still) are. The whole night has been a three-hour procession to "Don't You Want Me", and the quality chasm between 1981's Christmas Number One and 2002's (unknown at the time of writing) is so vast that, regardless of who wins in the Pop Rivals' phoney war, Pete Waterman oughtta consider topping himself regardless. 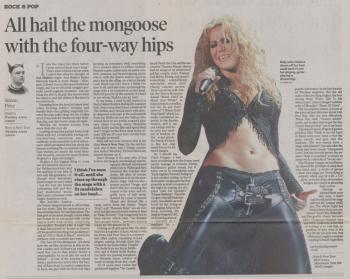