Martyn Cox explores the Hertfordshire garden of singer-turned-gardener Kim Wilde and finds a country idyll fit for a former princess of pop.

Flying off to Thailand to take part in a television documentary about detoxing, which will involve yoga classes and swimming in the Indian Ocean, might take most people's minds off gardening for a while. Not Kim Wilde. She got used to the jet-set lifestyle long ago, and all she can think about is returning home after the forthcoming trip to work on a new feature in her garden.

"I'm looking forward to getting back so I can start landscaping the bog garden", enthuses Kim. This will emerge from a pit where a pond used to be. She will fill it with rubble and organic matter, then extend an area of decking around it so that her family can walk among the plants. Kim aims to create a "jungly" effect, using plants such as the foxglove tree, Paulownia, Guinnera manicata, Chusan palms, ferns and other leafy, exotic-looking plants. "We will have all the big, glamorous, mad stuff", she explains.

Back in the 1980s and 1990s, hearing this might have come as quite a shock. It would have been hard to imagine Kim Wilde, daughter of a 1950s rock-and-roll star and singer of a string of chart hits, digging out a planting hole. However, Kim has recently finished a garden design course and is known by a new generation of people as a high-profile gardener. She has appeared on ITV1's Better Gardens and BBC1's Garden Invaders, and is the garden expert on ITV1's This Morning.

Her passion for gardening was stirred about ten years ago when she moved into a 400-year-old weatherboarded barn with three acres of land at Codicote in Hertfordshire. There was no garden when she arrived, but she could see the property's potential and was immediately entranced by its pastoral position above a river valley and overlooking fields.

A decade lter Kim has a charming home and garden. Behind her barn, which supports climbing plants such as ivy, wisteria and roses, is a vegetable garden, a covered patio and perennial borders. Further from the house is a field planted with native trees, where wild grasses and flowers grow unchecked.

This romantic wilderness also plays host to a large log cabin, which Kim and her husband Hal, four-year-old son Harry and daughter Rose, two, use as a retreat from the world. Dividing the vegetable garden and border area is an avenue flanked by the hawthorn Crataegus laevigata 'Paul's Scarlet', which draws the eye under an ivy-covered arch to a wooden sculpture of Gandalf, the fictional wizard from 'The Lord of the Rings'. This was a present from Kim to Hal, who is mad about the JRR Tolkien stories.

Attached to the house is a pergola terrace, smothered by a grape vine. It provides a shady place to sit in summer, and its life is extended into the autumn with the addition of a patio heater. "It's a fantastic outdoor dining room and we use it an awful lot. I'm amazed that you can grow something so Mediterranean in Hertfordshire", says Kim. "The vine is beautiful, with lovely autumn tints. I don't really grow it for the grapes, although we do munch them when they go black. I just grow it for a lovely fresh canopy."

The pergola terrace leads to a covered patio outside the kitchen door, which is separated from the vegetable garden by the hawthorn avenue. Beside the path are Rosa glauca and a pink hardy geranium, with catmint spilling over the path edges. There are also some box balls, which Kim keeps in shape with a yearly clip. "They have such lovely fresh growth in spring and look fabulous in winter after snow or frost, just like Christmas puddings."

Further interest is provided by Kim's vigorous Rosa rugosa plants. "They earn their keep, from bright fresh growth early in spring to late summer hips. These are gorgeous and still look great when everything else has gone. I love the simplicity of the flowers, although you don't get much scent. In every other respect it's a really good do-er in the garden", she says.

The vegetable garden consists of eight raised beds, some in need of cultivation. Kim explains, "I don't have a productive vegetable garden. I'd have to give up work to do it properly. It's enough that we can pick raspberries, eat peas in the summer and get rhubarb and early potatoes. I do it for the kids, so they can see where things come from. I remember as a child visiting gardens where people grew vegetables, and I was overwhelmed by them. I can't think of a better world for the kids to become engaged in at their age. I think memories of this garden will carry them through life and hopefully inspire them in all kinds of ways", she reflects.

Apart from caring for her children, much of Kim's time is spent filming, writing articles or attending gardening shows. Inevitably, this leaves her little time for the garden. To ensure that it looks good, she has a gardener to help with the bigger jobs, but she does try to get at least ten minutes outside every day.

"I try to keep the gardening ticking over. I sweep up, keep things in check and weed. It never gets really out of hand, I love getting my hands in the soil and watching things develop. I can understand people wanting low-maintenance gardens, but I've always been attracted to high-maintenance ones. It's never as bad as you think it will be", she says.

Most gardeners have one feature that they are most proud of, and Kim is no exception. Her raised perennial border is resplendent, burning bright with rich colours and cleverly combined forms and foliage. The border is crammed with grasses, ground-cover plants, flowering perennials and towering specimens such as Cynara cardunculus. The cardoon certainly makes an impression, with its silver leaves and purple thistle-like flowers held 2m (6 1/2 ft) above the ground.

"I'm delighted with my border", says Kim. "Its inspiration came from the immediate environment. The grasses, meadow and flowers made me want to create an a la carte version closer to the house. It's a way of bringing nature to our doorstep in a slightly more refined manner."

Beneath a backdrop of Verbena bonariensis, whose wiry stems and purple flowers weave through the oat-like seedheads of a stipa grass, is a combination that really catches the eye. A clump of red-wine-coloured Knautia macedonica has sent its floppy stems out in many directions, some brushing up against a pink echinacea with its daisy-like flowers and distinctive conical centres. The pinks and purples contrast beautifully with the electric blue of a spiky eryngium and the fleshy, glaucous foliage of a Sedum spectabile that provides long-lasting interest in the foreground.

At the front of the border are some of Kim's favourite ground-covering plants, which she hopes will eventually conceal the harsh brick edging. She loves Acaena and has several types growing in the border, including vigorous A. saccaticupula 'Blue Haze', which can spread up to 1m (3 1/2 ft) and carries small, spherical burrs above delicate bluish foliage. Also spilling over the edge are the lemon-coloured heads of Santolina 'Pretty Carol'.

Walk around the bed and you'll find Macleaya 'Spetchley Ruby', which Kim describes as a "nice thug". This reputation is based on its ability to spread rapidly, but its foliage and plumes of loose flowers make it worth taking the risk.

There are a number of grasses in the bed, including deschampsia and sedges such as Juncus. This plant has self-seeded rampantly, but Kim accepts this as it provides a natural support for lax growers such as knautia. However, not all her plants have grown well. The usually vigorous Miscanthus 'Hermann Müssel" has only managed to grow to 60cm (2ft) rather than towering at around 2m (6 1/2 ft), which Kim believes is a result of the clay soil.

Kim takes great pleasure from her border and loves to put plants together, finding it very rewarding when a combination works really well. These skills, she feels, are at an early stage of development, but she plans to continue honing them by trying new plants and plant groupings in the garden.

"My advice is to experiment, if you're not quite sure about something, try it. It's better to find out whether you were right or wrong than to not know at all. I've made lots of mistakes, and still do, but I learn from them, I guess that's my philosophy about life as well, but you can get away with making more mistakes in a garden than you can in life", she jokes. 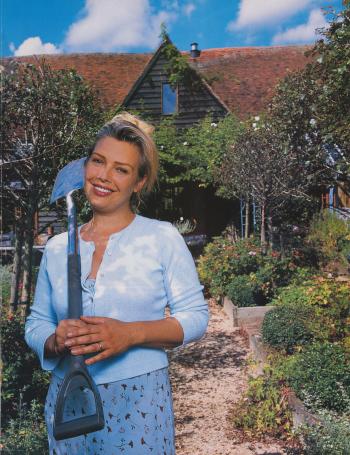 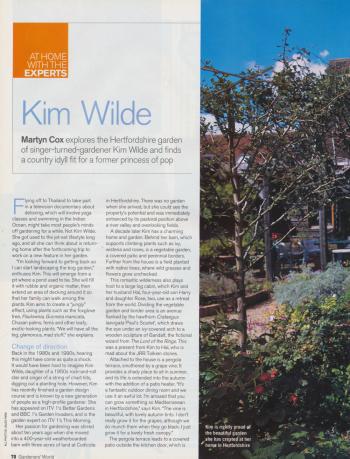 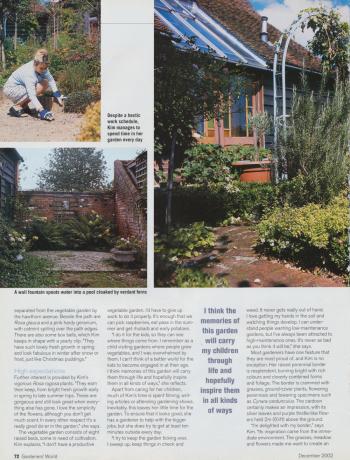 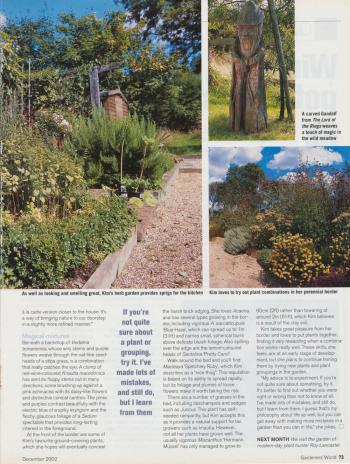 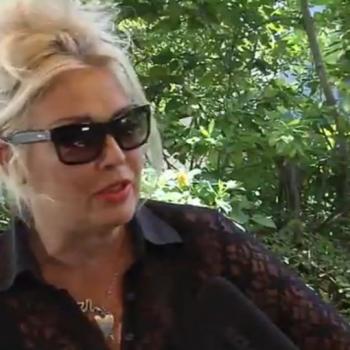 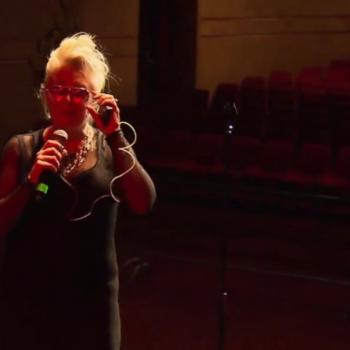 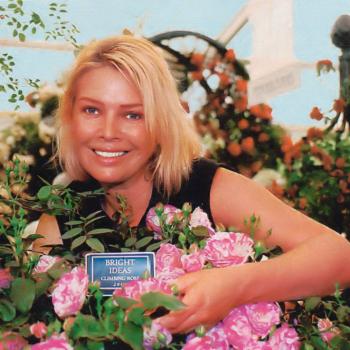 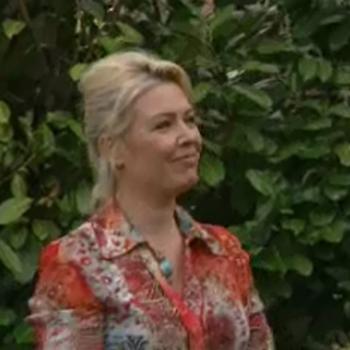 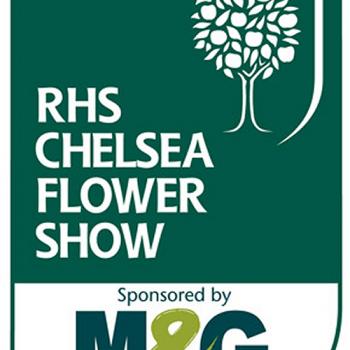