Kim Wilde: Pop music made me so unhappy

Knee deep in compost, the dirt thick under her fingernails, there is a smear of mud down the side of her cheek. It is a far cry from the slashed scarlet lipstick and rock-hard hairspray of her pop career but Kim Wilde says she has never been happier.
And to judge from the line-free face and clear blue eyes of the 41-year-old who now earns a living as a gardener, it is clear she is telling the truth.

"The Kim Wilde adventure never really felt like my own," she says. "Behind all the hits, success and glamour I desperately wanted to find my soul mate to join me on my own, personal adventure. I was lonely. There were some awful times and the happiness was intermittent. It is only now, when I have my husband, my children and I'm outside gardening that I really feel my life is my own."
But despite all this, Kim announced this month that she will go back on the road at Christmas as part of Here and Now, an 1980s revival tour. Success had once brought her to the brink of breakdown, so why go back?
"I'm sure some people think I'm mad, returning to all that. But this time it will be on my terms. I'll be there as an adult, not a confused overgrown teenager. I'm hoping that means I can enjoy it."
The daughter of 1950s and 60s pop star Marty Wilde, Kim grew up with a perfect rock pedigree. When her 1981 hit Kids In America stormed to the top of the charts, she was Queen of Brit Pop before the term had even been invented. Hit followed hit for Kim but neither fame, fortune nor fawning men brought the contentment she craved.
It is only now, with actor and husband Hal by her side, children Harry, four and Rosie, two, around her - and with a tray of lobelia in her hands - that she dares to feel happiness. Kim makes little attempt to disguise the fact that a major motivation for leaving her Hertfordshire home and going back on tour in the 1980s show is that it will subsidise her career as a jobbing gardener.

Last week she was planting out a Harry Potter-themed stand at the Royal Horticultural Society show at Tatton Park in Cheshire. And if belting out 20-year-old hits to middle-aged fans once a year allows her to continue doing that, then Kim is prepared to do it. She enrolled on a course in garden design five years ago after a period of isolation and despair following the end of her pop career. She then appeared as a presenter on the Better Gardens TV show but has now opted for a life outside of the public eye. Kim says this winter's tour alongside 1980s bands Human League, Dollar, Altered Images and Five Star could be her last foray into the spotlight.
She says: "I don't want to be an older rock chick like Madonna or Debbie Harry. I don't mind playing at it a bit but to carry on living that life just isn't worth it. I will do this tour but that is all. We did a similar one last year and had a giggle but at the end of the day I much prefer picking peas. I see my life now with my children, my family and growing vegetables. That is what I am doing now and I find it blissful."

To the outside world, Kim Wilde was riding a wave of success throughout the early 1980s with more than 30 hit singles including Cambodia and You Keep Me Hangin' On, ten albums and night-after-night of tour dates. But now she admits that with success came emptiness and isolation.
She says: "True, my career was going well but I needed something more. I got attention from men but it didn't make me feel secure. I was leading a high-octane life with so much stress and I hardly ever came down. I had problems with my stomach and pains in my back... there were constant feelings of anxiety."

And hand-in-hand with the stress came the monotony. Kim says: "I would do an album, promote it, worry about clothes, do a photoshoot, put a record out and hope for a hit. Then I'd do the same all over again. My life was filled with planes, suitcases, recording studios and not much else. That went on from when I was 20 until I was 30. It was boring and I became bored with myself."

Inevitably the hits became less frequent and the fees less fantastic - Kim's star was falling. She says: "I remember the first time I realised what was happening was when I was outside a TV studio and there was all these photographers running towards me. I saw them coming, then just stood and watched as they ran straight past me to Jennifer Rush who'd just released The Power Of Love. It felt just like it does when you lose out on love. But the problem was that throughout the high times I had gradually lost touch with a big part of who I really was. So when everything came to an end, I was left alone and isolated."

The turning point came in 1990, when Kim turned 30 and moved into a barn conversion in Hertfordshire. She says: "Plan A had been to find a guy, have babies and live happily ever after."

But it wasn't that easy - life in the country wasn't the perfect solution she had hoped for. Kim says: "When I got there it didn't seem right. I was in this big house with no one to share it with. And I'd been such a huge success that it was hard when there was nothing to focus on any more. I was a lost soul for a while and fell into a depression.
"I couldn't sleep for four months, but in the morning I wouldn't want to get out of bed. Even if I did, then I had nothing to do. My family were very supportive but for a while I was lost."
In a bid to put some control back in her life, Kim went backpacking around Thailand and on her return in 1996, took a part in West End Musical Tommy. It was then she met co-star Hal Fowler and within the year they were married.

She says: "Everything changed so quickly but looking back I had been gearing up for it for years. For the first time I felt protected, at peace and I fancied him a lot. He was dangerous, original and clever without wanting to possess me. He made me feel invincible. Now Hal, the children and gardening are the most important things in my life. I feel less stressed than ever and have found what I really want."

"If you hold out for what you want in your life, even if it is a complete change to what you are doing, the happiness you feel at the end of the tunnel is great. When I pick flowers I had sowed in the spring, or push a wheelbarrow with the kids in it and Hal is messing around with us, I think: 'Yes, this is what I was waiting for'. I'm just glad I held out for it." 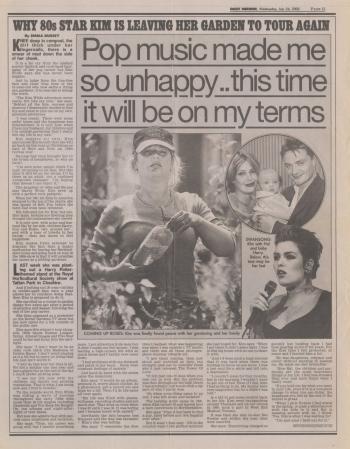