Pop stars of the 1980s are heading back to Tyneside tonight to perform their greatest hits.

And tickets for another Eighties extravaganza went on sale today to coincide with the gig. The Here and Now tours are becoming increasingly popular, and while the likes of The Human League and Kim Wilde will be strutting their stuff at the Telewest Arena tonight, come May 10 next year it will be the turn of the likes of Kool and the Gang, Pointer Sisters, Dead or Alive, Elkie Brooks, T'Pau, Jennifer Rush and Musical Youth to take to the stage and tickets, at £32.50, went on sale today.
The success of the previous Here and Now tours has prompted Kim Wilde to perform at the Telewest Arena almost a year to the day since she last sang there. The Here and Now Christmas Party Tour promises to be a musical treat, with a handful of major stars from the decade of ra-ra skirts and leg warmers.
Kim Wilde stole the show at the first Here and Now Tour last year and she'll no doubt be belting out classics like Cambodia, Chequered Love, You Came and the massive Kids In America again tonight.
Kim will be joined on stage by the likes of the Human League, Five Star, Altered Images, Dollar, Belle Stars and Visage. And just like last year, Kim has re-touched her locks and gone platinum blonde for the tour.
Telewest Arena's marketing director Paul Tappenden says: "The success of these tours is outstanding, always guaranteeing an exceptional line-up of top class artists from an unforgettable era of 80s nostalgia."
The Human League dominated the charts in the 80s and 90s and their worldwide hit Don't You Want Me was the Christmas number one in 1981.
Three of the original family members of Five Star will appear at the Arena performing songs from their album Luxury of Life, which spent 49 weeks in the UK charts.
Altered Images, fronted by Clare Grogan, burst on to the music scene in 1981 hitting the number two slot with Happy Birthday.
"I hadn't listened to our records since the mid-1980s. Not until this tour came about. But I didn't have the records myself, I had to get them sent to me," says Clare. "Gawd, it was such fun. I put them on and all these memories came flooding back. We did some pretty good stuff and I'd forgotten about it. The great thing about revisiting these songs is realising just how much energy they have." 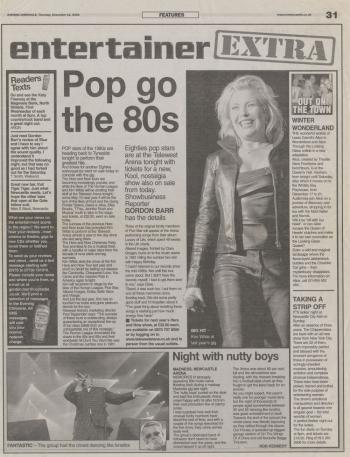