This week, Time Team embarks on the Big Dig, the largest archaeological project in Britain ever. Here, Tony Robinson explains how you can take part from your own garden, while Bill Wyman, Kim Wilde and Hugh Fearnley-Whittingstall tell Julian Champkin what they unearthed.

'I am really, really excited; because this is going to be the biggest archaeological event there has ever been in Britain, and the best bit is that everyone can join in,' says Time Team presenter Tony Robinson. 'And none of us knows what people will find out there. Whatever they do find, it will have meaning far beyond wherever it was found. There might be a medieval pottery kiln, for example: we could link that with all the pottery trade patterns and how many villages bought that kiln's bowls. And changing fashions, too - when did ordinary people change from wooden bowls to pottery ones? All that, from evidence that is waiting to be found in someone's back garden, now.
'People's own gardens are as good a place as anywhere to look for these things. Even if your house is newly built on farmland, that land will almost certainly have been worked for centuries, with possessions from people's pockets or bags, thrown away or dropped on it.
'Much of Britain has yet to be archaeologically mapped. We know of perhaps hundreds of Roman villas - there are likely to be five times that number still undiscovered. So there is a lot to be found; and every dig, as long as it's properly done, is worthwhile. You only need to dig a single hole.
'The end result will be a huge increase in what we know about the country, and about what went on here, under our feet, in the places where it is our turn to live today, so get digging.'

Ex-Rolling Stone Bill Wyman lives with his wife Suzanne and their three daughters in Suffolk, in the one remaining wing of a moated 15th-century manor house. Bill says: 'It was moving here ten years ago that sparked off my interest in archaeology. I thought, "Maybe I'll have a little dig." Within ten minutes I'd hit the top of a three-foot-wide Tudor wall that went down seven feet. I have since found two Roman sites, a Bronze Age axe head, Iron Age pottery and brooches, and hammered silver coins from 1100; in one field I found 300 Roman coins.
I've even made a little museum in the house of some of the artefacts I have dug up, including literally hundreds of clay pipes, from the 1580s right down to the early 1800s. And I know the names of everyone who lived in this house or the house that was here before it, from 1150 to today: who they married, when they were christened.
'This time we found a map from the 1800s that showed barns and outbuildings outside the moat, so we decided to try to find them. Unfortunately, we didn't. But we did find some things: Tudor brick rubble, and lots of oyster shells - oysters being what they ate in those days. There were some flint flakes from neolithic tool-making and even fossils. We certainly found signs of activity; but we didn't find the walls and floors we were looking for.
'We could have gone for an easy dig round the back of the house, where we would have been almost certain to find something - but the same sort of thing I have found already; Tudor buckles, a Richard III silver penny, a 15th-century carved bone heart, beautifully designed. And early copper and silver coins, and the remains of more than 30 walls - the whole layout of the buildings that were inside the moat - the kitchens, dairies, piggeries, the lot.
'The dig was not entirely negative. It's like fishing - I call it land fishing; you put your hook down, and you might come up with something, or you just might not.
'As Tony says, at the very least it told us that the people who removed the barns were tidy and carted everything away with them. Perhaps they put all of the interesting bits in a museum, just like I did.'

Kim Wilde lives in a converted 16th-century barn in Hertfordshire with her husband Hal and their two young children. She ended her pop career in 1990 and is now a garden designer. Kim says: 'When I first found the barn, it was still used as a barn. I converted it myself. There was a ruined outbuilding, which I knocked down, covering the remains with a flowerbed. But the Time Team thought there might be an even older building underneath, which would have belonged to the estate of medieval St Alban's Abbey. They started digging at the corner of the foundation but, because of the flowerbed, could only dig outside the old walls, rather than inside where floors and the best chance of lost artefacts might be. In less than two hours they found some slates, which I think came from it, and Tony found an 18th-century tobacco pipe, which I would like to keep. It may have been dropped by a farm worker.
'Below the top layer, the team found old nails, and a medieval roof tile that the county archaeologist dated to the 16th century; and then they hit solid chalk and flint - really hard going for the diggers. It seems it was medieval builders' rubble. And the fossil expert found a fossil - a tentacle of a squid. We have got Roman baths at Welwyn down the road, so it is possible that something Roman is still down there. It would have been nice to have found a coin.
'The farmhouse that the barn belonged to is next door and it is mentioned in the Domesday Book - so the site is ancient. However, we are the first people to have used it as a house. And, as well as the people who have been here before, it is fascinating when I think of the generations who will come after me. They won't have to look too far for our traces. I am busy planting trees. They should outlast us by centuries.
'When they were filling in the hole, I decided to put something back in. A heart-shaped stone came out of it - just an ordinary stone, accidentally heart shaped. And it set me thinking. In the kitchen I had a silver heart-shaped locket with mine and Hal's and the children's names engraved on it. So since the earth had given me a heart-shaped stone, I thought I would give it back a silver heart. So that is down there now for future archaeologists to find...'

Chef and writer Hugh Fearnley-Whittingstall lives in a cottage in Devon, on the Dorset border, with wife Marie and two young sons. Hugh says: 'What amazed me was the needle-in-a-haystack aspect of it all. With 20-odd acres of field to choose from, they dug a hole just one metre (3ft) square and 60cm (2ft) deep, and they found so much in it, including pottery possibly from prehistoric times. There was a kind of spurious logic to where they decided to put their hole. There is a single tree in a field that has obviously been cut and layered as part of a hedge 50 or 60 years ago: its trunk grows up, then along horizontally where it was made part of the hedge, then up again. But the rest of the hedge has completely vanished. I thought the hedgeline might be a good place to dig, as stuff tends to accumulate at the edges of fields rather than the middles - it gently migrates there under the influence of ploughing.
'I look out on a permanent green pasture, and I had assumed it had always been pasture. But Phil Harding of Wessex Archaeology was able to work out that that hadn't always been the case. The top few inches, the current topsoil, was dark - basically what the grass has been growing on. There were a few bits of relatively modern broken plates in it. Below that, though, you can see a large layer of soil of a slightly different colour, land that had been under the plough. And all through it are scattered bits of classic deep-red pottery that are almost certainly mediaeval.
'And below that again, just above the bedrock, is one last layer with a spread of prehistoric pottery on it. They think the place was rough grazing in prehistoric days, where they dropped a few things on the surface.
'So almost a millennium of Dorset farming history is on my doorstep. They looked at pretty much the same landscape that I look at; perhaps it was a bit more heavily woodedin their day. But I still look out at Ford Abbey woodland - the Abbey is the big historical influence of these parts. Whoever farmed where I farm would have been a small farmer, a tenant of the Abbey with perhaps 40 acres, and like me, growing his own vegetables, rearing his own livestock, making his own hams. The house itself is a Dorset longhouse, thatched, the oldest bit 16th- or 17th-century; but there was probably something on the site for centuries before that. The dig showed that the people before me have been doing just what I am doing now.' 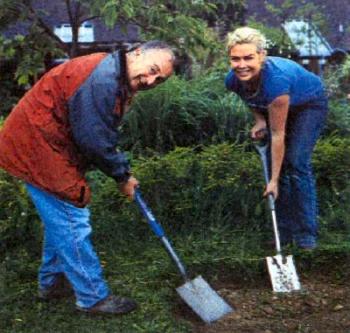 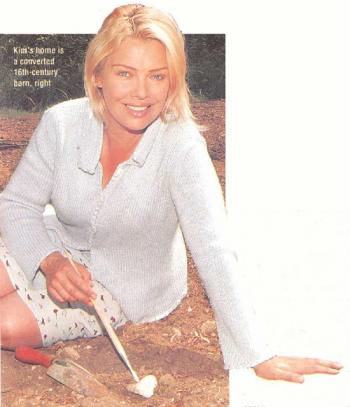 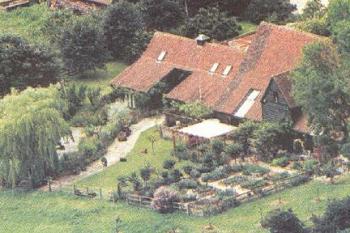 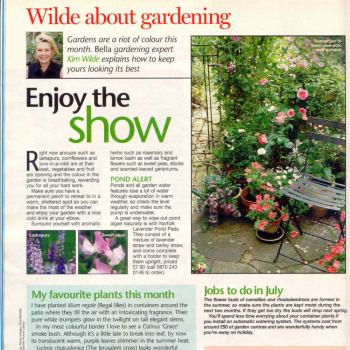