The Here and Now tour through Australia has once again proven that when you play the hits the audience love you and you give value for money. At last night's show at Melbourne's Rod Laver Arena 38 Top 40 hits out for 40 songs were performed in three and a half hours by seven performers and the audience loved it.
For the Australian component, it had been many years since 1927 performed but with ammunition such as 'If I Could', 'That's What I Think of You' and 'Compulsory Hero', the long night of sing-a-long had began. As for Mondo Rock, seeing Ross Wilson, Paul Christie, Eric McCusker and James Black together again leaves you hungry for at least one more short reunion. Most of the songs were sourced from their 'Chemistry' album but as they have a new greatest hits in store (The Essential Mondo Rock) a few more live gigs wouldn't go astray (would it Mr Wilson).
The memories flooded in as Go West and then Belinda Carlisle collectively performed 11 hits in a row. Paul Young was next and although he had the catalogue, it was not a good look. The words fought to match the melody at times and he was clearly not in control of the performance.
That was all quickly forgotten as Kim Wilde came on and immediately charmed the crowd. You can't complain about seven hits in a row, six of which were Top 10s. Just before her last number she told the crowd that she didn't do 'Kids In America' anymore. The joker did 'Kids In Australia' instead. You ol' trickster, Kim. Kim's band, including her brother and co-writer Ricky Wilde, backed each of the international acts as well, keeping a consistency and flow for the event.

After interval, it was time for the headline act, The Human League. This was like watching Kraftwerk on speed, a note perfect dose of electronica and a good serving from the second biggest selling album of 1982 'Dare'. Phil Oakey apologized on a few occasions that they were only performing a cut down set because of the festival like event but it fitted the mood of the show and no-one in the audience was complaining. The Human League were one of the biggest bands of the 80s and created a sound that may have been inspired by Bowie and Kraftwek but is still valid today.

The Here and Now show opened in Melbourne last night and plays Brisbane on Saturday November 15 and Sydney Monday November 17. For anyone who has ever had a bad hair 80s experience, this is the must see show to relive your youth.

Number One hits performed:
'You Keep Me Hanging On' Kim Wilde

Number Two hits performed:
'If I Could' 1927, 'Come Said The Boy' Mondo Rock, 'Our Lips Are Sealed' 'Heaven Is A Place On Earth' Belinda Carlisle

Top Five hits performed:
'That's What I Think Of You' 1927, 'Kings Of Wishful Thinking 'Go West', 'Leave A Light On' Belinda Carlisle, 'If I Can't Have You' and 'Kids In Australia' Kim Wilde, 'Mirror Man', 'Don't You Want Me' and 'Together In Electric Dreams' Human League

Top Ten:
'Cool World' and 'State of the Heart' Mondo Rock, 'We Close Our Eyes' Go West, 'Mad About You' and 'Summer Rain' Belinda Carlisle, 'Wherever I Lay My Hat' and 'Love Of The Common People' Paul Young, 'Chequered Love', 'View From A Bridge', 'Cambodia' Kim Wilde and 'Keep Feeling Fascination' Human League. 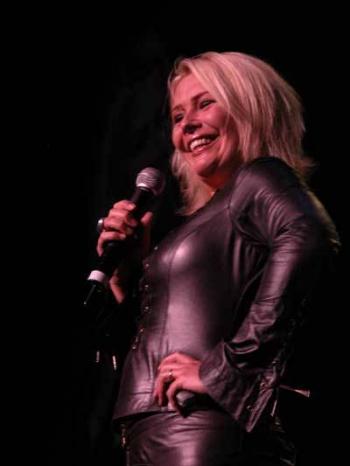