I'm going back to my roots

Bella's new gardening expert Kim Wilde reveals how she turned her back on pop stardom... and why family life is much more satisfying.

She was the stunning blonde sex goddess remembered for her string of pop hits in the Eighties including 'Kids in America' and 'You keep me hangin' on'. Today, at 42, Kim Wilde is better known for her hanging baskets. And we're thrilled that from next week, she'll be sharing her green-fingered wisdom with Bella readers as our brilliant new gardening expert.

'Discovering my love of gardening was almost a spiritual experience - I know that sounds dramatic, but it was like I'd seen the light', says Kim, who studied horticulture at college whilst pregnant with son Harry. 'I realised it was something I'd always had that just needed bringing out - like going back to my roots, if you'll excuse the pun. What I want more than anything is to encourage people to get out there and have a go, because that's how I got started. My husband Hal and I built these raised beds in our garden at home to plant vegetables. Afterwards we looked at each other as if to say: "What do we do now?" because neither of us had ever grown a vegetable in our lives. But we had a go and, of course, we made mistakes. But that's how you learn. It's become a way of life to us now. My big project this spring is to create a tropical garden. I want to have a go at growing bananas. My own garden is my inspiration and I'm fortunate that we have a lot of land. But you can make even the smalles of spaces look stunning, and I hope I can help Bella readers create the gardens they dream of. Once you start seeing results, it really is so rewarding.'

After Kim finished her course, a team of TV researchers turned up at the college looking for someone to front a new BBC show called Better Gardens. She says: 'Someone at the college said to them: "Hey, you'll never guess who we've just had here." It was their name-dropping that got me the job. I worried that I was running before I could walk, but they convinced me I could do it. What I lacked in expert knowledge I tried to make up for in ideas. I was aware it might hack some people off - it was a bit like: "Groan, not another soap star making a pop record." But it was a wonderful chance for me to get out of a career that was stifling me and make a go of something I absolutely loved, so I thought: "Go for it!"

Kim, daughter of Sixties star Marty Wilde, has not put her pop career right behind her. She's just been back on stage in an Eighties revival tour with other acts from the era like Heaven 17, Nick Heywood from Haircut 100, Carol Decker of T'Pau and Steve Strange of Visage. In the old days, Kim would have come off stage and gone out partying. But this time, after the gig it was straight back to her Hertfordshire home to Harry, who's now five, and daughter Rose, three - and to relax with husband Hal. They met six years ago when they starred together in the rock opera Tommy and their love story reads like a fairytale romance.

Kim says: 'My mum and dad fell very much in love when they met. Their feelings for each other were so intense. I remember my dad saying to me: "You'll know when you meet him and it doesn't matter if you're 28 or 80, it's worth waiting for." When I met Hal it was like, "Oh my God, this is it!" Here was this fantastic man who had the most incredible sense of humour and was a bit dangerous and naughty. But, liek me, he was very traditional in his values and the importance he put on family life.

'We met in January and by September we were married. It was just wonderful being so sure of something after so many years of feeling insecure. When I discovered I was pregnant with Harry it was just such a ridiculously perfect scenario, I couldn't believe my luck. I'd sit for hours marvelling at the fact that I had this little person growing inside me, trying to picture what he'd look like.'

Harry's birth was followed two years later by daughter Rose - and Kim reveals that she and Ha lhaven't ruled out having another child. She says: 'I've kept all the baby stuff which is a bit of a giveaway. I adore being a mum. I wouldn't say I a man earth mother - I don't bake enough for that. And I like working too much. But whatever happens in my career now, I know I've got this fantastic base - my husband, my kids, my house. They are the core of my life.'

Kim will be seen later this year in a new Channel 5 reality series Celebrity Detox with It-girl Tamara Beckwith, former Boyzone heart-throb Keith Duffy and presenter Richard Blackwood. They were shipped off to a Thai island for a week of fasting, meditation - and colonic irrigation! 'It certainly shifted a few post-baby pounds', laughs Kim. She's wearing jeans and a tracksuit top, her face bare of the thick, glossy make-up that was her Eighties trademark. The bleached blonde hair and her enduring sex appeal are the only reminders of her pop idol years. But she is happy with growing older and swapping glitz and glamour for home and family.

She says: 'People moan about getting older, but for me it's been a very liberating experience. I feel so much more at peace with myself these days. Writing music and singing was very rewarding, but I found the pressure of having to be slender and glamorous the whole time undermined me as a person. I had very low self-esteem. It was all about what I looked like. If I put on weight it was always picked up on by the press. I knew it went with the job, but the person inside was suffering and I knew I had to get out of the business.'

Kim reckons she was always destined for pop stardom. She says: 'I never had the slightest doubt that I would become a famous singer. It was what I wanted and it never crossed my mind it might not hapen. Looking back now, I can see I had delusions of grandeur. But eventually, I realised I was never going to be a great songwriter like Joni Mitchell or sing like Aretha Franklin. I could see my limitations and the great thing about getting older is that I've come to appreciate the person I am. On the recent tour I enjoyed being up there performing so much more - and I got better reviews than ever before in my whole career. Crazy isn't it - when you desperately want it, it doesn't happen and when you've stopped worrying about it, there it is.' 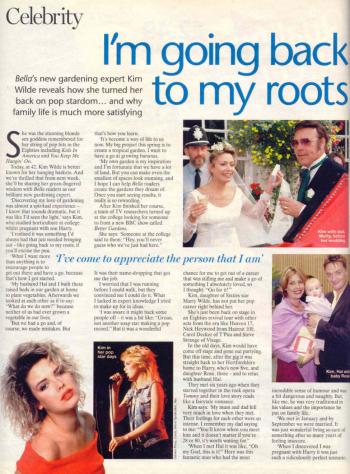 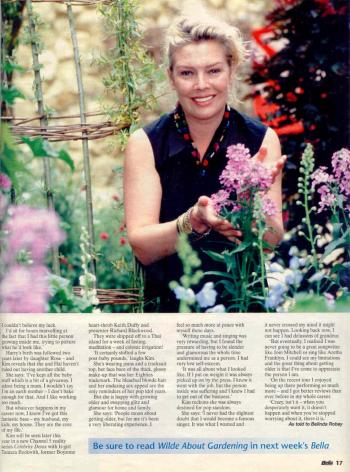 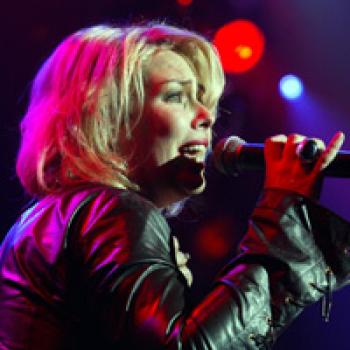