In the '80s, Kim Wilde recorded classic pop songs such as Kids in America and Cambodia, so she could give today's stars a lesson or two. Speaking to The Eye, Wilde says she is a little disappointed with today's crop of starlets, especially Britney Spears. "Britney I've always been very disappointed by," she said. "I mean, she has never really delivered. She seems to be an amazing performer, but it kind of stops there. She's a long, long, long, long way from being anything like Madonna, which she cleary aspires to be."

Wilde, however, does have good things to say about our Kylie Minogue, who started having hits in Britain when Wilde's career was already well established. "I've always been a big Kylie fan," she said. "I love all the stuff she did with Stock, Aitken and Waterman. Then she started to look very sexy and, for the most part, she's been making really fab records consistently. She's a really lovely thing, isn't she?"

Wilde is in Melbourne tonight at Rod Laver Arena for the Here and Now tour, along with Belinda Carlise, the Human League, 1927, Go West, Paul Young and Mondo Rock. When she is back in Britain, Wilde's passions are her two children and gardening. This year, she had a surprise smash-hit single in Europe with fellow '80s star Nena, of 99 Luftballons fame.

The song was called Anyplace, Anywhere, Anytime, and went to No. 1 in Germany, Austria and Switzerland. Wilde said she might record new songs. "I don't know if there's something for me to go with as an artist; there might be," she said. "At the moment, my passions are directed at my children and my gardening." 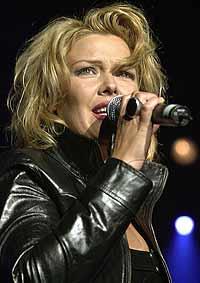