Oh dear. This pic of me, Paul Young and Carol Decker from T'Pau was taken three years ago when I did the first Here And Now tour, and I really look like a woman who's just had two kids. My breasts look really large because I'd not long stopped breast-feeding and all that malarkey. I had a brilliant time on the tour and became good friends with Carol. We went on holiday to France this summer. This year I'm on the bill with Carol, Paul, ABC, Five Star and loads of others. It's great working with all these 80s stars, 'cos back then we didn't really get to know each other - we were all too busy running round the world, chasing success. Nowadays there's time to chat, show pictures of our kids to each other and generally take the piss.

What a horrible bikini. It's the most unsexy thing I've ever seen - it just doesn't look good on me. This shot was taken in Australia in 1993. I was very fit then and used to go to the gym an awful lot, but there'll be no more pictures of me in a bikini - not after having two kids. I do look after myself and am very active, but I really enjoy drinking and eating. I can't get into my old 80s stage outfits any more, but I'm having some new clothes made for the Here And Now tour which are much raunchier than anything I wore back then - lots of leather and a material that looks like you're not wearing very much.

I dated Chris Evans for a month or so when we co-presented The Big Breakfast in 1993. He was great fun and I can only say good things about him. We haven't really stayed in touch because we were both lucky enough to find our ideal partners and get married. Back then we were looking for our soulmates and briefly we thought we may have found them in each other, but we quickly realised we hadn't. We had a lovely time but knew we weren't destined to be together.

Here's me, my husband Hal Fowler and our daughter Rose, not long after she was born. I got into gardening because of the kids. When we bought our house, which was an old barn, there wasn't a garden. I started to make one for the children we were planning. I took myself back to college to do courses in design and planting. That led to Better Gardens and Garden Invaders on television. I love working in our garden and I love other people's too.

Here I am with my dad, Marty Wilde, outside the Globe pub on my wedding day in 1996. We stopped off on the way to the church to say hello to the landlord and have a glass of champagne. It wasn't for nerves - but I never say no to bubbly. I've been married to Hal for seven wonderful years now. I'm madly in love with him, we've had two beautiful children and we still make each other laugh.

I've no idea when this was taken and why I was walking across Abbey Road with (from right to left) Hazel O'Connor, Sinitta and Alannah Currie from the Thompson Twins, but it must have been back in the 80s. Compared to the other girls, I think I come out of this picture quite well. That's a pretty subtle outfit I'm wearing. I never felt truly sexy until I hit my 30s. In my 20s I knew how to look at the camera and how to pout, but it was all a game really, like putting on a Kim Wilde costume.

This was outside London's Legends nightclub. I've seen a bit of Sam Fox over the years. She's a nutcase, in the nicest possible way - so quirky, confident and fun. I've never been much of a clubber. Back then I had an unsophisticated social life and it hasn't changed. I still hang out with the same people and do the same things. The only thing we don't do any more is chase boys.

Last year, when five asked me to take part in a celebrity detox programme in Thailand, along with Tamara Beckwith and Keith Duffy, I jumped at the chance. It was a fantastic experience, giving my vital organs a rest. As a mum it was lovely to be pampered for 10 days. I also lost a lot of the weight I hadn't been able to get rid of after giving birth to Harry, who's now five, and Rose, who's three. I was a bit worried about the colonic irrigation, but it didn't hurt and it turned out fine - but I'm not sure it's something you should do very often...

Let me say there was never anything between me and Mick Hucknall. I didn't care to be on his long list of conquests, but people seem to think I was. He's always after everyone, so people just assumed a hound dog like him and a single girl like me would get together. For my part, I've always admired him - not in a physical way but as a musician and a singer. 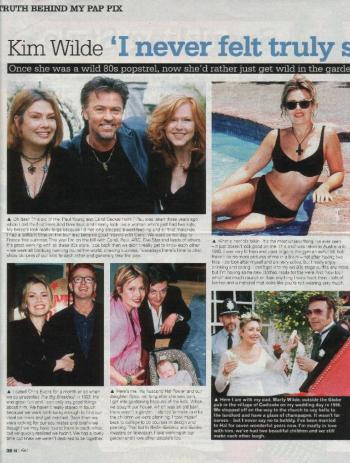 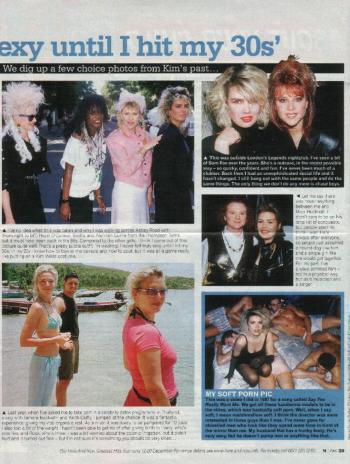