Life after pop music takes many forms. There are the stars who burn out and wind up crashing into rehab or the others who slip back into society after a brief time in the sun. However, most observers were surprised when 1980s pop icon Kim Wilde turned from platinum blonde to green thumb. After enrolling at horticulture college, Wilde went from filling arenas to designing gardens. Fans stopped asking for autographs and started asking for advice on killing aphids.

Is gardening the new rock? "Actually, gardening is quite big here in England," Wilde says. "It attracts a lot of young people. "It's a really vital new area to get into. I'm really interested in garden design. I was at art college just before Kids in America was a hit so for me to get back into horticulture is a way of picking up my education where I left it off to become a pop star. Plants are fascinating and beautiful. I'm very passionate about the subject."

The passion for plants replaced the first love of Wilde's life: music. Reared in a musical family (her father and brother wrote anthemic, attitude-laden early 1980s hits Kids in America, Cambodia, View From a Bridge and Chequered Love), after a brief comeback in the early 1990s with a cover of If I Can't Have You and an umpteenth greatest-hits set, Wilde moved out of the pop limelight rather gracefully.

She started by travelling the world - this time moving beyond hotels and TV studios. It was important, as the geographically challenged Wilde admits when she sang Cambodia she "didn't even know where it was". Those times have changed.
"I went off backpacking around Australia with my friend, started off in Perth, went up to Cairns. Had a great adventure. We ended up drunk on Magnetic Island." After a while she wound up back on stage in a British production of Tommy. "I was doing eight shows a week and after that you don't want to sing a note for the rest of your life. So I just stopped singing." While in Tommy, Wilde met, fell in love with and promptly married co-star Hal Fowler, father of her two children, Harry and Rose.

"As far as I'm concerned I stepped out of the music industry when I got married," Wilde says. "We were all babied up; pregnant, then pregnant again not long after. For most of that time music really was the last, last thing on my mind. I don't even think I listened to very much music. I was always tired or trying to be quiet or looking after a child."

Three years ago Wilde was coaxed out of retirement with an offer to join an 1980s package tour: Here And Now, which was set to sweep across the UK with the likes of ABC, the Human League and Howard Jones. "I thought it'd get me into shape," Wilde says. "Plus they said they'd pay me quite a nice amount of money. That's always nice." Wilde admits she was sceptical, but her fears it might have been seriously cheesy were alleviated when the first Here And Now tour was a huge success: it has now become an annual event in the UK and starts an Australian leg this year.

Wilde's been a part of each leg and has become a stalwart of 1980s reunion tours: she dyed her hair to her trademark blonde again after a period as a brunette. '"I was amazed how much I enjoyed it and how much I had missed it," she says.

"These songs come out of the ether; there's so many songs you'd forgotten. I stand side of stage listening to these artists thinking, 'God, I remember that song'. " Indeed, she's seen the 1980s revival first-hand. Kids in America has been covered by everyone from punk and ska bands to the new US TV act American Juniors, a pre-teen spin-off of American Idol.

When Wilde first joined the reunion tour she had no qualms about reliving the past and wallowing in nostalgia. However, after a well-received new song, Loved, on a recent best-of, and a new song with German artist Nena (of 99 Luftballons fame), Wilde is starting on a new album.

"I'm trying a few demos. I've had a surprise hit in Germany with Nena, an accidental hit," she says. "Things have taken off there so I've been motivated to try out some more new material. When you have babies you change a lot, Harry's five now, my daughter is three, and I now feel I'm getting back to being the Kim I was before I had them and that's a nice feeling." 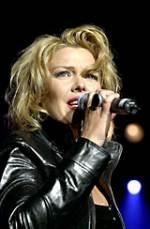