Kim Wilde, 43, mother, pop star and TV gardener, is a convert to detoxing but admits to being a foodie who doesn't say no to a beer and a curry in front of the TV once in a while.

You went from rock and roll to rhododendrons - not a typical career path.
My husband, Hal, gave me the courage to try something different. I'd desperately wanted to be a singing sensation but having a happy family life would have taken priority at some point during my career. When I moved back to the countryside, I pursued my love of gardening and took a City & Guilds course in plants and plant design - it has all just gone from there.

Gardening - good for the soul, bad for the back?
I've always had a problem with my lower back and it was exacerbated when I had children. Then when I started gardening I stupidly did things like picking up wheelbarrows full of rubble and walking them up scaffolding planks to empty into skips, which certainly didn't help, par ticularly as my hip was quite painful too.

So green tea or your GP?
I had my breakthrough when I went on Celebrity Detox Camp in Thailand for Five last year. Before I went I was susceptible to bronchial problems and my body felt as if it was falling to bits. After a week of drinking only supplement-loaded liquids, coconut juice at lunchtime and consomme in the evening, I came home feeling 20 years younger, a stone lighter and free of pain.

Sounds simitar to the David Blaine method.
It was enlightening and liberating.

Did you feel the power too?
Absolutely. I had these intense massages every day for about two to three hours. The masseuse would press her hand right into my abdomen, almost as if she was touching the base of my spine. I also did this fantastic energising power yoga which isn't dissimilar to t'ai chi, concentrating on pure energy - I really got into it.

Yes lovely, but didn't it also involve having colonic irrigation on national TV?
I'm glad I did it, it was like having an MOT, a big old clear-out . We were taught to insert this device, similar to a knitting needle, into the bottom and lie back. I felt nauseous at first but it didn't hurt and once the toxins were flushed out I felt fine - though I'm not in any hurry to repeat the experience.

So is your wild past catching up with you?
I'd always associated detox with alcohol and drug rehabilitation, not in terms of cleansing your organs. I realised food was a focal part of my life and removing it from the equation was liberating. I did a ten-day detox in the summer which was more relaxed than the regime in Thailand.

As an Eighties' icon, is there pressure to maintain the big hair and lip gloss look?
At the time there was more pressure from the record company and the media - now 1 just want to be as foxy as I can muster.

Ever been a bean counter?
I've tried different diets in the past, such as the Atkins. I lost several pounds but then put it all back on as soon as I started eating normally. I don't detox to lose weight , it's to encourage me to eat better. To keep off the pounds you need to exercise regularly.

Any vices?
I'm a total foodie. I love food - anything! But now I'm more focused on what I'm eating, how often and in what quantities. It's about balance,and not eating too many cheese toasties.

Ever give in to the cravings?
I do have the occasional blowout such as a beer and an Indian in front of the TV.

General maintenance tips?
Since the detox I've pretty much eliminated caffeine from my diet. I have hot water and lemon for breakfast now. It's a much gentler way to start the day and by not drinking alcohol and eating smaller portions of food I find I have more energy. I can feel the benefits from the nutrients and my skin has improved too.

Enjoy working up a glow?
I don't go to the gym but I power walk for about 40 minutes twice a week and I do some yoga, usually at night before I go to bed. And gardening's great exercise.

How do you chill out?
Once I've put the children to bed, I usually sneak off to the bathroom and fill it with essential oils and candles. It's the type of treat you can have frequently without it bothering anyone else in the family.

If you could have one wish.
That I could have brought a masseuse home with me from Thailand. It was so nice, so healing. I'd love to have a massage like that every week. 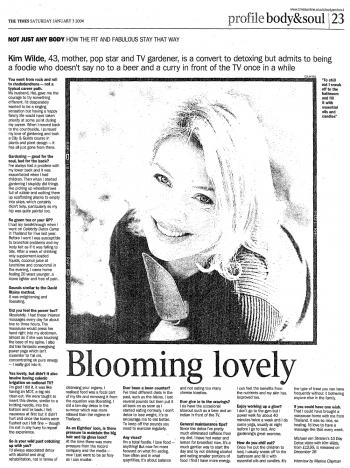