Kim Wilde hated the barn conversions she saw, so she decided to do one herself, she tells Mark Anstead

There's a 'wow' moment that comes when you walk into Kim Wilde's converted barn near Welwyn in Hertfordshire. Just after stepping through the stable front door and turning left, you are confronted with a huge open-plan living room rising three storeys to the apex of the ceiling. Were it not for the television set and modern furniture (which seem dwarfed by the room's proportions), you might feel as though you had gone back in time to a medieval feasting hall.
The 1980s pop star-cum-television gardener has been truly settled in this five-bedroom home only since she met and married the actor Hal Fowler in 1996. The couple have two children, Harry, 6, and Rose, 4, whose presence is felt everywhere. Having bought the barn in 1990, Wilde didn?t enjoy the first six years of living in it alone.

When she moved from St John?s Wood in London, she had turned 30 and become disillusioned with her roller-coaster career. She had also suffered a string of failed relationships with stars such as Chris Evans, Mick Hucknall and Julian Lennon.

'I thought if I prepared a nice family house I could settle down here, meet somebody special and everything would get better', she says. 'I was beginning to feel trapped inside the machine. I wondered if that was going to be the extent of my world and I desperately wanted to get out. But nothing much changed except I was now living in a place far too big for me, and that made me feel worse. It felt like something you might see in an Adam Ant video.'

There is that Prince Charming feel to it. With four black candelabra hanging from the oak rafters, the immense walls are made from bricks laid diagonally between the original curved beams. Above the living space, with a floor laid with pine planks, a balcony leads to Wilde?s main bedroom, partly concealed by a stone fireplace and a chimney. The effect is dramatic.

Having been brought up in Hertfordshire it was natural for Wilde to want to live nearer to her family when she was going through her crisis. She says that by the start of the 1990s, being a pop star had ?become boring?. While recording an album in Knebworth, she was staying in a local cottage and started leafing through the property papers. Charmed by the idea of living in a country barn, she went to view a handful but was dissatisfied with the way the conversions had been done.

?But I made a decision that I never wanted to go back to London,? she says. ?I rang a local estate agent and asked if he knew of any barns I could convert myself. Within a week he found me this one.?

She paid 240,000 for it and hired architects to draw up a scheme for renovation. But she was aghast to find the suggestions were based around carving up the central space into separate rooms. Preferring to keep as much of the original scale as possible, she tore up the plans and suggested her own scheme, making one dining/kitchen/ living space at the centre and building most of the bedrooms in an adjoining stable. By the time she had finished, she had spent the purchase price again.

She kept the two lean-to sheds on the far side of the barn, turning one into an oak kitchen neatly positioned off the main living room and the other into a utility room, mirroring the kitchen further along the same wall. She had York stone laid at both ends of the house and here it sweeps behind the chimney to her office on the ground floor.

?All the walls were clean plastered and I did my ageing process on them,? she says. ?I put patches of Vaseline on the walls and replastered over the top so that the plaster would come away in patches. It gives it a bit of a French feel, making it less functional.?

More recently she made further alterations to her main bedroom at one end of the house. Initially she had created two mezzanine floors - a balcony with a huge storage room leading off it containing her showbiz clothes ('and mountains of shoes'), and a small bedroom above that was reached by a spiral staircase. When she married, the upper bedroom didn't seem big enough for two people, so she moved the bed into the space underneath, only to find it lacking in storage space as a result and too dingy to be able to sleep in properly.

Last year she spent 50,000 having the upper level removed and the room extended into the balcony, allowing in much more light and giving the opportunity to create two walk-in dressing rooms next to a bathroom. Over the bathroom door she has hung a sign ('HF and KF'), one of three sets of initials placed around the place declaring her devotion to her husband.

'We've got some lovely lighting in this bedroom and at night-time it's a really tranquil space,' she says. 'And I can't tell you how much heaven it is to have a 'his' and a 'hers' walk-in wardrobe, so this is a very favourite place to be and very relaxing.'

It is in the garden where Wilde finds her greatest sense of tranquillity. Since retiring from the pop limelight after her marriage, she has thrown herself into gardening as a hobby. After her home was featured on ITV?s Better Gardens, she was approached to co-present Garden Invaders for the BBC. Now she writes gardening columns and designs layouts for private clients. She has a children?s gardening book coming out next spring.

'Before the kids came along there was nothing out here but rough grass. After they were born we put in a hopscotch path inset with plants to attract butterflies. And there's plenty of camomile and lavender around to help keep stress levels low.' Stress is something she knows about, having struggled with premenstrual syndrome for years. She tamed her mood swings through exercise and dietary changes.

'Lavender is a very stress-busting plant,' she says. 'If I'm just in the garden and feeling a bit haggard, I?ll pick up a bit and rub it between my fingers. I?ve always encouraged the children to do the same. The whole idea of the garden was to try and create a calm place for them.'

She may sound like a domestic goddess but there?s still a bit of the wild Kim in her. Each year she performs at Here and Now revival concerts along with other 1980s acts, such as Belinda Carlisle and Limahl. 'I can handle it far more easily nowadays because I'm not the only act on the stage,' she laughs. 'I don't take myself seriously any more. There's no way I could go back to that kind of life full-time'. 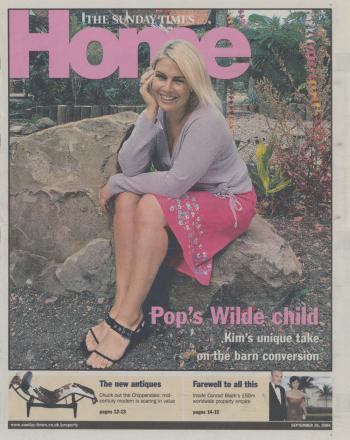 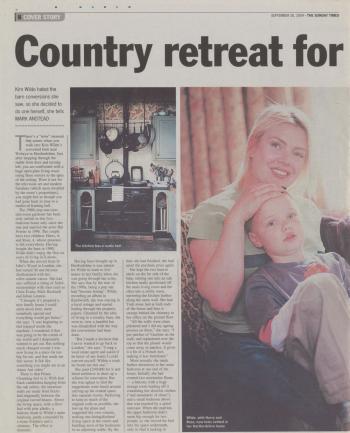 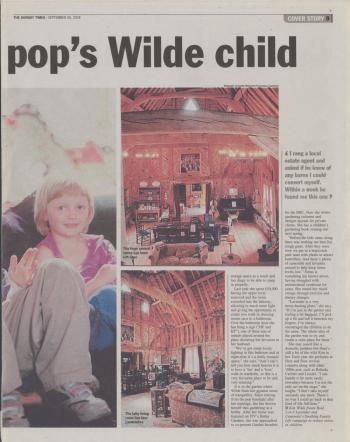