Music legend George Michael last week complained about the price of fame, saying that he was fed up with being a celebrity. Here, Eighties pop star KIM WILDE, 43, speaks about how she kept her sanity at the height of her popularity. Singer of such hits as Kids In America and You Keep Me Hangin' On, Kim turned her back on the business and is now a garden designer, appearing on ITV's Better Gardens and the BBC's Garden Invaders.

When people say they are fed up with fame, yet are still pursuing a career in the limelight, I tend to be a bit suspicious about how much they really do hate celebrity - when they are continuing to do the same thing.
When I got out of the music industry, I was fed up with my career for several reasons but, primarily, it was because I was bored. It held no challenges for me any more. I had been singing since I was 21 and there I was at 36. I wanted something more interesting in my life. Importantly, however, I never let fame or celebrity - or whatever you want to call it - rule my life.
I learned very early on how to play it and to turn on the fame bit whenever I had a record out. I didn't ever really fit into the role of being a celebrity, anyhow. All my friends had been my friends before I had my first hit in 1981 with Kids In America and they are still there now as my friends two decades on. So when I was in the charts, these true friends were the people I would choose to go out with and have dinners with.
I never really went to nightclubs. I remember going once to the place everyone went to and really hating it - I can't even remember its name, so much of an impression did it make. Everyone was looking - people were standing around. It wasn't a comfortable experience but some celebrities spend their whole lives in places like that, waiting to be seen.
I just didn't go out to places where I would be observed. I kept my private life fairly private and that let a lot of the "celebrity thing" pass me by. I learned about fame early, too, growing up in a household where my dad, Marty, was a celebrity in his own right.
He taught me the most important fame lesson of all. He said that fame was a tool to bring out and use for work, then to put it away in its box, in much the same way as you would with a hedge trimmer after you'd finished with it.
You could say I never empowered my tool - I never gave fame the power to take me over and always kept my feet placed firmly on the ground, knowing fame and all the trappings it brings is a very fickle game.
There were some upsetting aspects about being in the public eye. It wasn't nice constantly reading about my weight in the press. I also realised I wouldn't have bad things written about me if I didn't put myself in the position of being seen falling out of a nightclub. Ultimately, in spite of a few personal comments which were upsetting, the whole thing was just too boring at the end of the day.

Now I've been married for eight years to Hal - and meeting him was a turnaround. He gave me the courage to walk away from it all. I had been scared about how my career would develop after I'd stopped singing - just what does an unemployed pop star do?
The future did really haunt me and, like a lot of people in this kind of career, I was scared of change. I fell into gardening through necessity, really. My husband and I wanted children and I wanted a garden that was fairly mature by the time they were old enough to play in it. So I had to make my own and, from that, came my new career. I realised I really loved gardening and that I was good at it. I knew I needed a career of some sort, as I would have been bored staying at home. I have seen a lot of marriages fail because the woman was bored sitting at home.
I still do a bit of singing, with the Eighties tours last year, but they were very much on my terms, just two or three weeks - not months on the road with schedules that leave you feeling half-dead. It has been fun meeting up with the old crew but I'm not selling a record and there's no pressure of trying to prove myself to anyone.
The worst thing when I was famous was that I was constantly haunted about not having any career at the end of the day. If I'd not found gardening as my new career, then it would be a very worried middle-aged lady sitting talking now.
I was lucky that fame has given me a good life but, because I had the advice of my dad and merely used it as a tool, I came away without it having done much damage.
Because I kept things in perspective, I didn't end up in a clinic for alcohol or drugs and it hasn't broken up my marriage, like it does to many pop stars or people who are constantly in the public eye. It's fun to dip into the celebrity pool now and again, with a few concerts here and there, but fame isn't everything. If you let it rule you, then you are heading for a fall - or worse. 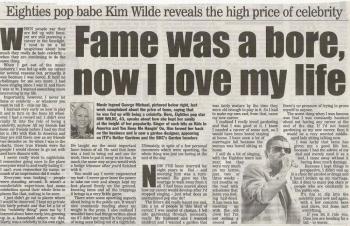