A new study by Country Life magazine shows a distinct gender divide in our attitudes to gardening. While men love lawns and the opportunity to use power tools, women dream of herbaceous borders and fragrant flowers. True? Or just a sexual stereotype? Here, three of Britain's most famous female horticulturists reveal all to Stephanie Young.

Kim, 43, was a pop star but left the music industry in 1996 and trained in horticulture. She has presented BBC1's Garden Invaders and is now writing a gardening book for children. She lives in Hertfordshire with her husband, Hal Fowler, 35, an actor and theatre producer, and their children, Harry, six, and Rose, four. Kim says:

In my 20s I could never have imagined I'd leave behind the hedonistic world of pop for the peaceful and holistic world of horticulture. But my life is so much more fulfilling now that I have discovered the third love of my life (after music and my family): a passion for plants.
My career change happened by chance and was as much of a surprise for me as it was for everyone else.
In 1995, I was having a professional crisis. I'd just finished a stint in the West End musical Tommy, and was unsure what to do next. I was hardly setting the charts alight any more, and I was disillusioned with the emphasis the music industry places on image and the pressure to stay a perfect size 10.
When I met my husband that year and we talked about having children, I finally decided it was time to leave the music industry.
Hal and I married in 1996, and bought a house with a large plot of uncultivated land. I was intent on turning it into a garden for our children to enjoy and so, once I was pregnant in 1997, I enrolled on a summer course in design and planting at Capel Manor College in Enfield.
I never expected it to catch my imagination in the way it did. I loved every area, from botany to garden design.
A couple of months later an ITV executive asked if I would consider working on Better Gardens, and I jumped at the chance. I learned as I went along, but it was when I went on Garden Invaders three years later that the work really began.
I was still breastfeeding my daughter Rose at the time, and was pushing wheelbarrows full of rubble up and down ramps.
I definitely overdid it - but I was aware that many people expected Kim Wilde, the faded pop star, to turn up, mill around, drink coffee and point at things. I wanted to prove I took horticulture seriously and could lead a team.
Despite my efforts, there is still a lot of male prejudice against the growing ranks of female horticulturists. Critics say gardening programmes have been 'dumbed down' and that female presenters offer little more than nice breasts and pretty smiles.
That kind of back-biting is infuriating. There's no reason why a woman can't be a serious gardener and sexy - although I'm not sure I personally pull the look off.
The other week, I was building a garden for a show in Cumbria when a shocked member of the public saw me looking grubby and sweat-drenched, and loudly commented: 'Oooh blimey, you don't look like that on telly.'
Fortunately, my passion for my work is more important to me than my image, so I don't worry about those kinds of comments any more.
My own garden has grown along with our family, and I can't imagine one existing without the other. In fact, it was my children's constant wonder at the process of nature that imspired me to work on a gardening book for children.
I don't think men and women are so very different when it comes to horticulture. My son loves flowers, and my husband is as green-fingered as me - though perhaps he shows more interest in the strimmer than I do. 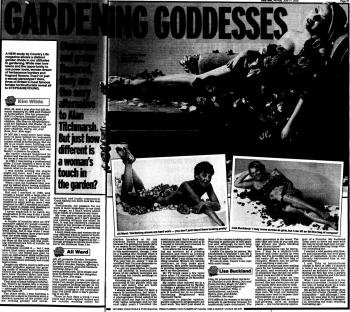