How Marty fell down as a pop

As singer Marty Wilde continues his 50-date nationwide tour, he has candidly confessed that he wishes he had been a better father to his famous pop-star daughter, Kim.

Marty, now 64, had 14 hit singles between 1958 and 1962 including Sea Of Love and Rubber Ball. Kim, 43, became one of the highest-earning female artists of the Eighties with such hits as Kids In America. But while their relationship as always seemed close, Marty admits he "wasn't a very good dad" and bitterly regrets some past paternal failings.

When Kim was born, Marty confides: "I desperately wanted a boy, so when I got the call from the hospital to say it was a girl, all I could muster was 'Oh'. It wasn't the best response from a new father and I'm not proud of it but sadly it was an indication of what was to come."

Marty has three other children with Joyce, his wife of 45 years - Ricky, Roxanne and Marty Jr. He adds: "I wasn't around a lot of the time and when I was, I'd pretty much please myself, shirking the responsibilities of the children in the process. It pains me a great deal now. I regret the time lost."

The singer puts his fatherly shortcomings largely down to his own upbringing. "The negative aspects of what my parents instilled in me have unfortunately been central to the way I've brought up my own children", he explains. "I remember Kim being told on the phone that her first single, Kids in America, had sold 180,000 copies in one day. Any normal father would have hugged her, congratulated her and celebrated with her. I just said: 'So?'"

His own father, Marty tells Woman's Weekly, had "always made me feel that nothing was ever good enough, and he set standards that could never be reached."

When Marty left school, the singer goes on: "My father couldn't understand where he'd gone wrong and how an intelligent, competent craftsman like himself had managed to produce such a useless son."

Nevertheless Wilde, who is touring with fellow Sixties artist Joe Brown, is grateful for his current family situation. 'Incredibly, we've always managed to remain close", he adds. "I don't know how my family have put up with me, really." 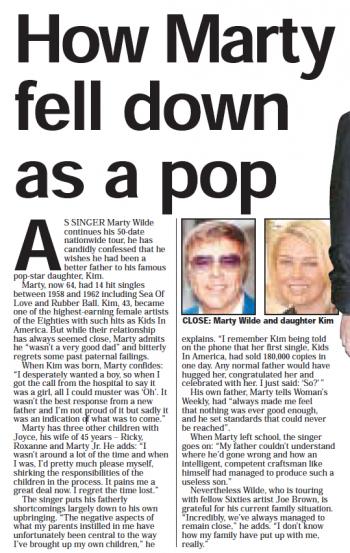