Note: This article is a compilation of an article in Hertfordshire Life (2002) and an interview on the TOTP website (2002).

Kim Wilde turned over a new leaf, career-wise, in the Nineties. She's gone from earthy, twenty-something pop star to earth mother, forty-something garden designer. But for some of Kim Wilde's fans, the transformation has been hard to take. "I've been booked to work on gardens where it's obvious that the husband had a thing about me in the Eighties", she says. "I've walked in looking like death warmed up and ended up looking a whole lot worse. You can see all their illusions going out of the window. I like that. It appeals to my sense of humour."
Born the daughter of Fifties Brylcreemed sex god Marty Wilde in 1960, the family moved from south London to the Hertfordshire village of Tewin when Kim was eight.
It was there that she discovered her love of the great outdoors. "All of a sudden, the neighbours were bringing us fruit and vegetables from their own gardens and I thought that was wonderful. My mum really got into gardening and I used to help her", she recalls.
Singing had always been like a second language, so it was no real surprise when Kim announced her intention to go into the pop business. "As far back as I can remember, my family were always making music together - my dad would be strumming his guitar and we'd all sit round perfecting harmonies," she says. "I also used to watch him in concert and fell in love with the idea of performing. Then, when I was 19, my dad and brother wrote Kids in America. Overnight, it became a huge hit."
Suddenly, Kim's trademark bee-stung lips and bottle-blonde hair were everywhere. But although her dreams of being on Top of the Pops came true, the chart-topper, by nature a shy person, wasn't necessarily happy. "I was very self-critical," she admits. "I would sit in the corner of the room glowering at the TV whenever my videos came on. I also didn't like to use my fame as a bargaining tool. If I was out socially and friends said: 'You can get us into this club - you're Kim Wilde!' I'd get very embarrassed."
Kim eventually started to enjoy her new life when she separated the star from the real person. "I decided to treat the image like putting on Saturday night clothes, which I could have fun with. The rest of the time I sat at home writing introspective songs and wishing I could be Joni Mitchell."
Being a less dangerous version of Blondie's Debbie Harry gave Kim hit after hit, from Cambodia and Chequered Love, to You keep me hangin' on. Her success also led to an invitation to support Michael Jackson on his stadium-filling 1988 Bad Tour. But as the Eighties moved on, the hits began to wane and Kim grew increasingly dissatisfied with the direction in which her life was taking. "I began to feel trapped inside the industry machine", she admits. "I didn't feel I was expressing myself in any new way and desperately wanted to move on. Basically, I'd become bored with the music business and bored with myself."
Kim began with what she describes as phase two of her life in 1996, when she was asked to play the heros mother in the West End version of The Who musical, Tommy. She met actor, singer and producer Hal Fowler in the show and married him within six months of their first date.
"The first time we went out, he took me to The Ivy (the snazzy West End restaurant much-loved by the glitterati), hoping to impress me", she reveals. "He thought I went there all the time, but I'd never been in my life. I couldn't believe how glamorous it was. He'd got a wad of money from his agent because he obviously thought I was going to order champagne and caviar, and was ready for the worst, but I didn't go mad.
"I knew Hal was the one for me. It was clear from our conversation that we had so much in common. We both come from loving, solid families and we both like doing the same things. The very first time he came back to my house, I took him round the garden and told him the names of all the plants. He told me afterwards that it was because I knew their Latin names that he decided I was the girl for him.
"Today, I feel very lucky to have Hal. Together, I believe we can take on the world."
Kim and Hal now have two children, Harry and Rosie. It was while they were awaiting the birth of Harry that Kim really developed her interest in gardening. She decided to fill her time with landscaping the grounds of the family's beautiful 400-year-old converted barn, and started an evening class course at Capel Manor College in Enfield. "I was enjoying a nice semi-retirement, I was having a baby and we had the garden," she says. "I could get really fat and no one could give me a hard time about it. I was in heaven!"
Carol Vorderman, host of ITV's Better Gardens interrupted this nirvana. "Researchers from the show discovered I was studying horticulture and were excited about the novelty value of having me on it as a guest designer. I must admit I didn't know as much about horticulture as they probably thought I did. But I grabbed the chance with both hands. I'm more fulfilled now than I've ever been."
Kim has since hosted BBC1's Garden Invaders and cultivating plants is very much where she sees her future. However, she hasn't turned her back on singing completely and took part in an Eighties revival tour alongside Paul Young and Heaven 17 last year. "I was overwhelmed by the warmth people had for me," she says with a smile. "It was great fun, but I found I couldn't walk in high heels any more. I'm more used to wellies these days!"

Is pop music better or worse now than in the '80s?
I certainly don't think it's inferior. There's some great stuff about. I love R&B. Ashanti and J-Lo and Craig David are all coming out with cool stuff. I think pop-wise there certainly aren't as many personalities about nowadays as there were in the 80s. That's Robbie Williams' great strength, his personality. It's certainly not his singing! People want performers, personality and drama and you got that in the '80s.

What do you think of the Pop Idol show, does it encourage young talent?
Mmm... I haven't seen anyone on there to really convince me yet. Those kids can sing but you need a bit more to be a pop star than just a good voice. I don't think the shows are an obstacle to real talent getting through. Real talent will get through whatever the obstacles. Look at David Gray. His album beat Gareth Gates to the No. 1 spot didn't it? There's hope yet.

Do you have any regrets?
I could pick holes in it and say I made some mistakes but it was the best career for me at that time. It enabled me to have a life now, to be normal. I can go down to Tesco's to do the shopping and not get bothered. Having the level of fame Michael Jackson has is pointless. You can't do anything. It enabled me to leave the business with a bit of dignity and if I want to do this retro '80s thing now, I can.

Did you enjoy being a pop star?
I liked the performing but I wasn't too keen on the rest of it. There was never time to relax and take stock. There was always pressure to keep the momentum going with a new single, a new album. It grew to be quite exhausting, mentally and physically. I started going through a bad depression towards the end of my career. My self esteem was really low. It took me a few years to recover from it.

Who was your main pop rival?
I used to be really jealous of Claire Grogan but only because I thought she was gorgeous and I loved the band and I bought her records but I wouldn't say there was any real rivalry. 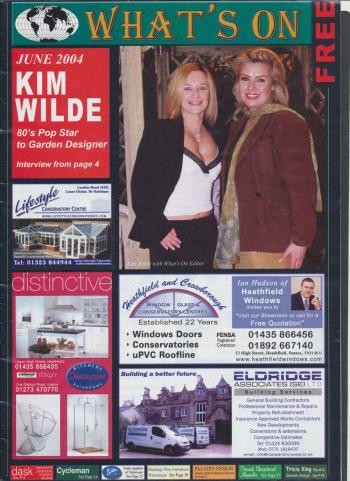 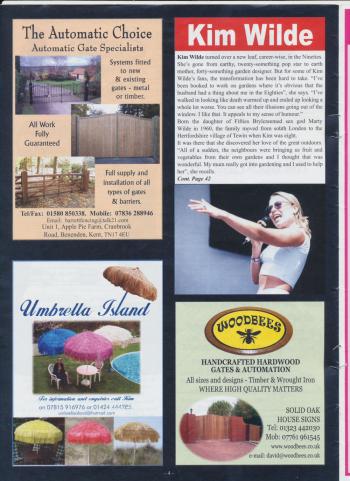 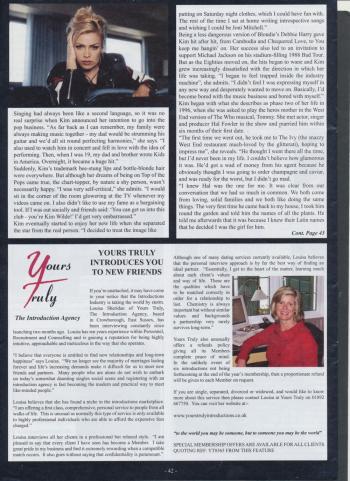 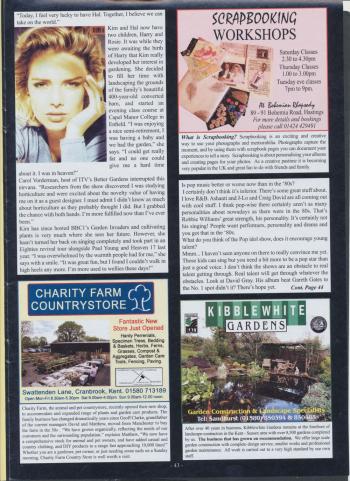 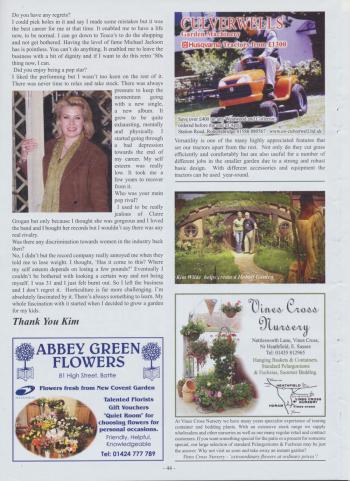