Kim Wilde declares: 'Plants are vulnerable like a beautiful woman who doesn't know it.'

Kids and gardens. Aren't they supposed to go so well together? Virtually the minute our twins were born, we started scouring around for a house with a rectangle of lawn attached. And yes - our kids do love to potter outside, poking at slugs, making enormous mud pies with a daisy and dandelion garnish. But the whole kids/garden situation isn't quite as controllable as I'd imagined. For one thing, gardens are actually very similar in nature to children. Left unchecked for long periods, they too run wild, becoming ultimately untameable and a source of heartache and worry to their owners. It may be feasible to keep one's outdoor space under control for the early part of the summer - but bung in a two-week holiday, plus a hideously rainy August, and you're faced with an unrecognisable wilderness on your return.

One summer, after a trip away (plus several weeks of ?not getting around to? mowing the grass) our lawn reached such dazzling heights that neighbours would stop me in the street and quiz me about it, almost on a daily basis. 'Like to borrow our strimmer?' they'd ask. 'Or shall I come round and scythe it for you?' One acquaintance - Concerned of South Lanarkshire - announced, 'I've figured out what to do. I'll use my lawnmower on its side!"

Our garden had, I feared, become quite a talking point. I took to hurrying through town with my head down. We adopted a new, secret route to school. Whenever anyone began a sentence with, 'I see your gard...' I'd dive into the Spar or public lavatories, emerging only when they'd mooched away to sigh about the destruction of a conservation area.

These days, our garden is less of an eyesore. While it offers a nicer view from the house, there is a downside; planting and weeding like blazes - actually caring for our garden - means there's so much more to spoil. Our children leap over and trample on plants. My clematis, which had grown to around four feet high, has been snapped off three inches above the ground. In the September issue of Red magazine, singer-turned-gardener Kim Wilde declares, 'Plants are classy. They're vulnerable like a beautiful woman who doesn't know it.' Tragically, the beautiful women in our garden have been flattened by size thirteen wellies.

The kids regularly conceal small rocks and plastic toys in the grass, to shock my partner as he charges over them with the mower. They attempt to drag the entire house outside - cushions, blankets, even duvets are hauled on to the lawn - yet insist on bringing the garden (soil, worms, strange beetles) inside. Why can't they just leave things where they belong? If that's not irksome enough, my sons see fit - on the final weekend of the summer holidays, as a sort of finale, if you like - to charge through my mother's borders, wrecking the plants which she has nurtured from seed. Her garden, once a fine example of what can be achieved when one?s children have flown the nest, now looks severely ravaged and results in a prolonged telling-off as we drive back from Ayrshire, plus a PlayStation/Gameboy/pretty much everything ban until 2015, when my sons will be old enough to leave home and trash their own nasturtiums.

I'd love my children to appreciate the beauty of plants, and plan to take them to Ian Hamilton Finlay's celebrated garden, Little Sparta, near Dunsyre in Lanarkshire, described as a 'spellbinding mixture of poetry, art, gardening and sculpture'. However, I'm informed by a crisp-sounding lady that 'children aren't allowed to visit. It's really not safe for them - there's so much water - and it's full of artworks. Really, it's a kind of outdoor gallery, and not suitable for children at all.'

My friend Pam, who has two grown-up children and a wonderful rambling garden which incorporates woodland, a lake and an island, says, 'It's hard to get the balance right between the aesthetics and the practicalities of kids. Some people's gardens are extensions of their homes and as such they're not comfortable or welcoming. They may be a visual feast, but they don't stimulate the other senses. Children are supposed to stay on the paths and not touch the plants. I can't stand gardens like that.'

In contrast, Pam's garden is wonderfully wild, a place where children can run free and are never told off. It's not quite as free, however, as my partner's garden during his house-sharing punk band days. The band's 'pad' looked out on to a tangle of bracken and diseased trees, plus a shopping trolley, which was parked in a small clearing in the middle and used as a makeshift barbecue. 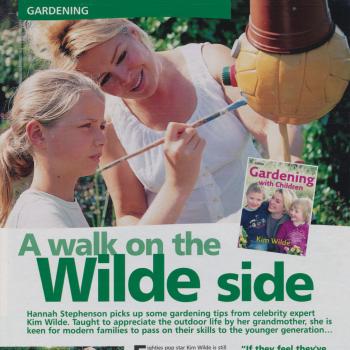 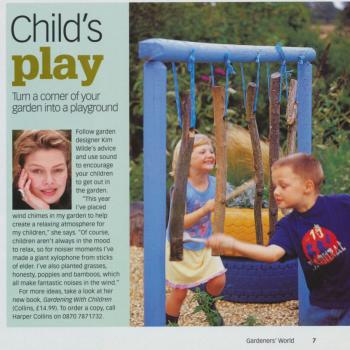 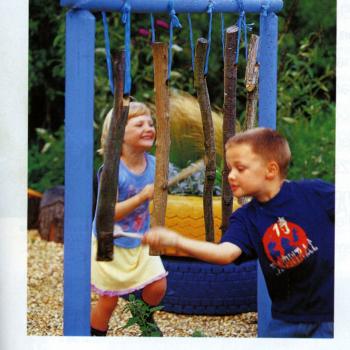 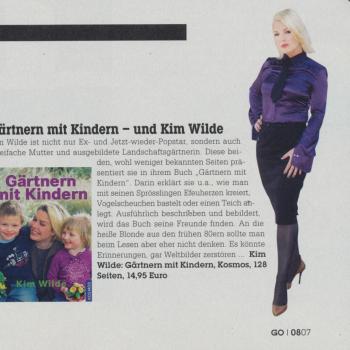 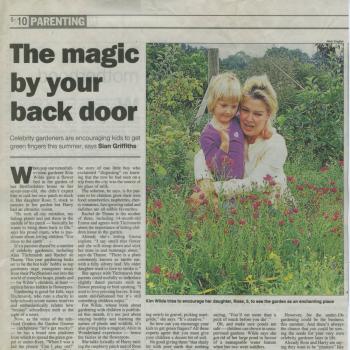