Me and my record collection: Kim Wilde

Kim Wilde is giving up her gardening gloves to return to the job that made her famous. The fourth Here and Now tour starts next month and Kim will be belting out the hits, such as her 1980 debut single Kids in America.
Kim made 10 albums and more than 30 singles before turning to a more recent passion, gardening. She has presented several series of Garden Invaders for the BBC.
Now 44, she lives in a 16th-century barn in Hertfordshire with her actor husband, Hal Fowler, and their children, Harry, seven and Rosie, five. We won't keep you hangin' on - here's her top 10...

STEVIE WONDER
Fulfillingness' First Finale (1974)
My folks had a fantastic record collection when I was growing up. We had a much more intimate relationship with albums in those days; you just don't get the same thing with a CD. My dad had Innervisions, which I loved, but I bought this one when I was about 12 and it felt like it was mine - so it was always my favourite.

MIKE OLDFIELD
Tubular bells (1973)
This was the one record my mum couldn't stand. She'd say: "It's bloody bagpipe music, get it off." But I have enduring memories of listening to it with my dad (rock 'n' roll star Marty Wilde). He would go off to gigs and I'd go with him in his E-type Jag. We'd be driving in the middle of the night watching the leaves dancing across the road and listening to Tubular Bells.

TODD RUNDGREN
The Ever Popular Tortured Artist Effect (1982)
Todd Rundgren is incredible. He's so clever and funny, he's got a good wit and irony about him and he sings like a banshee. For my first three albums my father and brother Ricky were writing my material, but the simplicity of Rundgren's melodies inspired me to try and write some of my own songs.

JONI MITCHELL
The hissing of Summer Lawns
Mum and dad had Blue and Ladies of the Canyon which are both superb, but this is wonderful. It's quite jazzy; I love all the trumpets and cornets. Joni always struck me as being intensely intelligent and interesting. I love her music.

BLUE NILE
Hats (1989)
This is really simple synth pop, but it's atmospheric and emotional. It's stripped down to basics and you just know every nuance of it has been pondered over. This album is special to me as it was the music me and Hal fell in love to.

TOM WAITS/CRYSTAL GAYLE
One from the heart soundtrack (1982)
Tom Waits is another artist who howls like a banshee. I'm attracted to these unhinged personalities with emotional voices. His gruff voice and Crystal Gayle's sweet voice collide in a most beautiful way.

METALLICA
Metallica (1990)
I love Metallica. We were asked to get involved in a concert at the local school last summer, and my part was to play with the school rock band, who were all 15. Their repertoire was mostly Metallica covers such as Enter Sandman. I've never had as much fun in my life.

MARY J. BLIGE
No more drama (2001)
I'm really into soul and dance music and R'n'B, but it's the one point where my and Hal's tastes differ. He can't stand it so I have to listen to anything like that in the car. Mary J. Blige sings from somewhere else. The only bit I don't like on the album is this awful song PMS, about suffering from pre-menstrual tension.

TRAVIS
The Invisible Band (2001)
Flowers in the Window is fantastic gardening music. It's funny because people have a concept of getting older: you get married, settle down and start gardening. But although this is quite "settling down" music, since I got into gardening my life has been like a very fast rollercoaster ride.

DUSTY SPRINGFIELD
Dusty in Memphis (1969)
This was always my mum's favourite and reminds me of being a child. I met Dusty in the Eighties, but it seemed like something was wrong with her. A lot of female 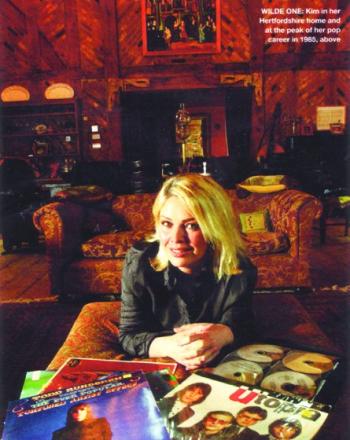