Summer in the garden, winter on the Arlberg: Kim Wilde

Singer, garden expert, mother of two children. Celebrated as the Queen of Pop in the eighties, she is enjoying a big comeback. She is from England - but she also feels at home in St. Anton am Arlberg: Ladies and Gentlemen, the one and only: Kim Wilde!

She has been coming to St. Anton am Arlberg for many years: Kim Wilde. In the eighties, she enjoyed her biggest successes. "Kids in America", "Cambodia" and "View from a bridge" were worldwide hits in her first big career. "But", says the Queen of Pop of those days, "nothing is as transitory as show business. You have to change, invent yourself anew again and again - yet still stay true to yourself."

She signed her first record contract when she was twenty, conquered the charts and the hearts of millions right off the bat with her first album, "Kim Wilde". But success is elusive at times. The follow-up albums "Select", "Catch As Catch Can" and "Teases & Dares" never managed to fulfil public expectations - although Kim Wilde was always good for a worldwide hit, for example in 1986 with "You keep me hanging on", a spectacular conversion of the Supremes classic.

Here in Austria, Kim Wilde seemed to gradually recede into oblivion. But it was not at all that way in England. She sang and acted for a year in the rock opera "Tommy" by The Who. And she discovered a new personal and professional passion outside music: in the impassioned traditions of her country, she dedicated herself to the art of gardening and landscape architecture. Channel 4 broadcast Kim Wilde's garden series, showing the easy-going Pop Queen with unique sex appeal wearing rubber boots and wielding a watering can.

Easy going - that is just the right description. Whoever has the chance to get to know Kim Wilde a bit better will find her very natural and... easy going. Charged with energy yet utterly unpretentious. With her husband Hal Fowler and the two kids, Harry and Rose, she spends occasional winter weeks in St. Anton, where she loves the wintry landscape and skiing. "I even talked my husband into starting skiing", she tells us, beaming.

Family, home and garden - you might just think that this woman in her forties, one-time charismatic Queen of Pop, is settling down. Far from it! A few months ago, she was in the music studio next to German singer Nena ("99 Balloons"). And in 2004, her wonderful song "Loved" appeared, and her album "The Very Best of Kim Wilde".

Without any doubt, Kim Wilde is on her way towards a brilliant comeback as singer and performer. Maybe there will be a new album with all new songs soon. And perhaps there will even be a cover version of the Doors song "Wintertime" included in it... 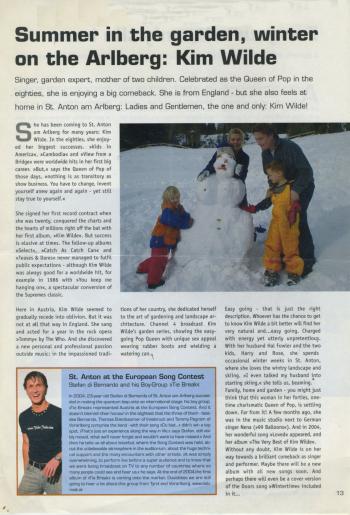