The shape I'm in: Kim Wilde

Kim Wilde, 43, the daughter of Fifties rock 'n' roll star Marty Wilde, made her name as a pop singer in the Eighties with hits such as Kids In America and You Keep Me Hanging On. More recently she's found success as a garden designer and presenter, appearing on ITV's Better Gardens and the BBC's Garden Invaders. Here, Kim, who lives in Hertfordshire with her husband Hal Fowler, 35, a producer, actor and singer, and their two children Harry, six, and Rose, four, tells us about her diet and fitness regime.

'As a teenager I didn't have a high opinion of myself. I had nearly size eight feet and was much taller than the other girls, so I felt like an ungainly, unattractive giant. It wasn't until I reached my late teens and early 20s - when my pop career began - that I started to feel less insecure about my looks.

I'm pretty happy about my body now. I have my mum's pretty nose and my dad's full mouth which means I don't have to resort to risky collagen injections. I have no moral objections to plastic surgery, but I don't think I'd ever go down that road. There are so many other things you can do to keep yourself looking good for your age. Like most women, I gained weight after having children and seemed to spend most of the time snacking. It's easy to get into bad habits when you have two children and a hungry husband - especially if, like me, you're a bit of a foodie. Now, after a strict detox regime and regular exercise, I have a defined waist but a J-Lo derriere. It bothered me at first, but now she's famous for it, I don't mind so much. The only thing I'd really like to change is my arms and make them skinny like Angelina Jolie's. I think her whole body is amazing.

A couple of years ago I was in a bad way healthwise. I was suffering from back pain and was prone to bronchial infections and viruses. So I was delighted when I was asked to go on a ten-day detox at the Koh Samui Health Spa in Thailand for a TV programme. The regime was pretty dramatic. I had no food for almost seven days and survived on herbal drinks. But then I was on a sunny desert island and had three-hour massages every day, which cured my back pain. I did try colonic irrigation which was fine, but not something I'd recommend now.

Although I was intrigued by the idea that you could service your body like a car, there are gentler ways of cleansing your system. I don't think I'll do something that strict again, but I do believe a short detox can be very beneficial, which is what my new DVD is about. During the trip I lost almost a stone and managed to keep the weight off when I got home. It was because it inspired me to change my health regime.

I eat lots of organic fruit and vegetables, have less red meat and plenty of fish. I drink two litres of water every day and a glass of hot water and lemon to clear out my system as soon as I wake up. I also eat less wheat and dairy products and snack on vegetables or fruit instead of biscuits or sweets. I try to go for three vigorous powerwalks a week to get my heart going, too. Gardening is great exercise. I took it up as a hobby after Harry was born. It became a career only when I found out it was actually a real passion. But it's not just something I do on TV - I also get private commissions.

Then, in 2001, I was asked to take part in an Eighties revival music show. I enjoyed being back on stage and now I can sing again part-time, I enjoy it much more. I had a No. 1 hit in Europe last summer with Anytime, Anyplace, Anywhere, and am now thinking of recording an album.

But the difference between my Eighties career and now is the fact I don't take myself too seriously as a pop star anymore. I just enjoy being an entertainer who can still sing.

It wasn't until I was 36 and got married that I walked away from the music business for a while - mainly because I wanted a change.

It was hard to juggle a successful music career with a personal life, and once I decided I wanted to have children and be in a happy - and stable - marriage, I knew I had to re-assess my priorities. It all started when I slipped into a depression brought on by stress. Suddenly, my life stopped being a roller-coaster and I had a chance to reflect on the fact I felt empty and out of control. It was then I decided to leave the music business and find another life, but I had no idea that other life would be with Hal and eventually - once we'd moved to the country - involve gardening.

I met Hal when we worked together in the musical Tommy. I liked the fact that he seemed totally unimpressed and uninterested in the fact I was a pop star. In fact, he kept confusing me with other singers, like Kim Carnes. My marriage is the best thing that's ever happened to me and our children bring the most incredible joy into our lives. There have been tough times but I think you have to go through them to make you a stronger person. Now I don't have to carry the world around on my shoulders, life is so much easier.'

Michael Van Straten's Ten-Day Detox with Kim Wilde is out now on DVD and video. 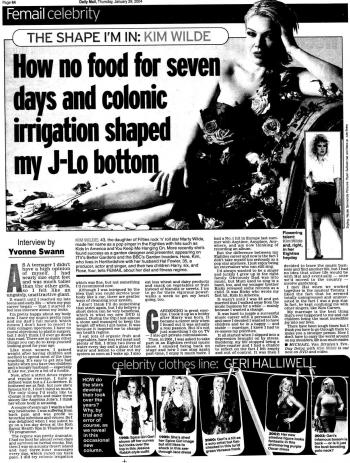